Well, again, I am a week behind in posting, but that’s okay becuase I’m still working on my logo for this blog, so I haven’t started promoting it yet, which means I’m allowed to be behind. Also, I think I’ve been a little hesitant to post this becuase of the utter failure it made me feel like. See these cupcakes and their pretty little packaging that I made for a birthday present for a dear friend: 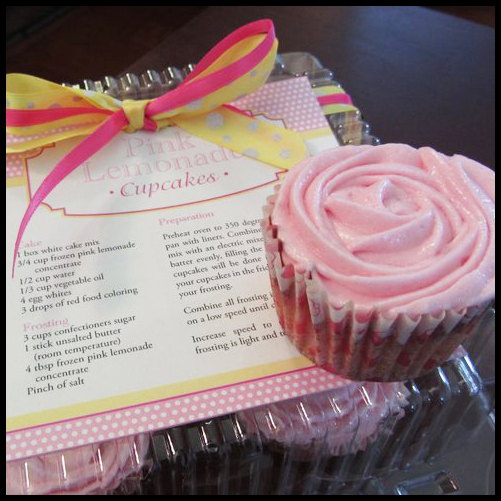 They look harmless, don’t they? Maybe even cute, frilly, and tasty looking, right? Well, these lucky 5 cupcakes and their packaging actually ended up being just that, but what about the rest of the batch? The other 19 that didn’t make it?

Well, lets just say never rush while baking. Never. Lesson Learned. Major Fail. The first problem that occurred was overfilling of the baking cups. Now, while I don’t fancy myself a baking pro, I’m actually very far from that, I do know my cupcakes. And I know how much the cups should be filled. But in my rushed state, I decided that I didn’t want to remove any batter from the first cup, so instead, I would fill the rest of the cups accordingly and see what happened. I don’t mind a large cupcake, so I really didn’t see any problem with this. Stupid, stupid me.

The second issue I had was that I was working on a new oven and I somehow canceled the entire baking process when I only wanted to turn the timer off and restart it. So then, I spent about 20 minutes waiting while nothing was baking. After that, I attempted to salvage them by trying to continue to bake them, but they were a lost cause.

Luckily I had just enough cake batter for 5 more cupcakes. 4 for my friend, and 1 for me. I have to admit, they were pretty good. I think I went a little overkill on the lemon flavor becuase I decided to add more than the recipe called for, but overall, I was happy with the results.

I’ve decided that in an effort to try more cupcakes and start going through all the many recipes I save, I will make a new recipe every month. While this blog is mainly to focus on tasting cupcakes from existing establishments, I think that sharing recipes and my experiences with them definitely fits under the scope of this blog. Again, it’s my blog and my choice.  😉