Recently there were some big debates on IcedGems Facebook page about whether their cupcakes are good or bad. Specifically, one customer complained saying that she bought 6 cupcakes that were very dry. IcedGems responded by saying that they “bake artisnal cake from scratch packed with flavor and the crumb is different to mass produced cake with enhancers.” Then, they basically went on to suggest that she was use to crappy store-bought cakes so she wouldn’t be able to appreciate their cakes. They did offer to replace them though, which is a nice gesture.

When I first read this I wanted to jump in with my thoughts for a couple reasons. First, NEVER suggest that a paying customer might not have good taste. If you do, you risk loosing a customer and any friends of theirs. Second, my first experience from IcedGems was a cupcake from their truck, and it was dry. There is no question about it. While this blog might be new, I’ve been eating cupcakes for a long time from bake shops and cupcakeries all over the United States, and I know when one is dry. BUT I didn’t respond. Instead, I decided to give them the chance to prove me wrong, I purchased two cupcakes from their store front yesterday.

Before I get into my review of the actual cupcake, I want to critique their packaging methods:

If you aren’t sure what you are looking at, let me describe it for you. The do not use boxes when you purchase one or two (or I’m guessing three) cupcakes. Instead, they treat your beautifully decorated cupcake like it’s a doughnut or bagel and throw it into a bag wrapped in parchment paper. I understand that boxes add cost, but to me this isn’t cool. Someone has taken the time to decorate this little treat, and you are going to possibly mess that up, so the person who spent $2.50 on each little “gem” can’t enjoy the time that went into it? It just makes no sense to me. Single serving boxes aren’t expensive when ordered in bulk and you can raise the price to $3 if need be. I really didn’t want these to be messed up and dry so I was very careful with the bags, and when I got home I immediately stored them in my cupcake containers to insure they stayed as moist (or as dry) as they were when I got them while letting them get to room temperature: 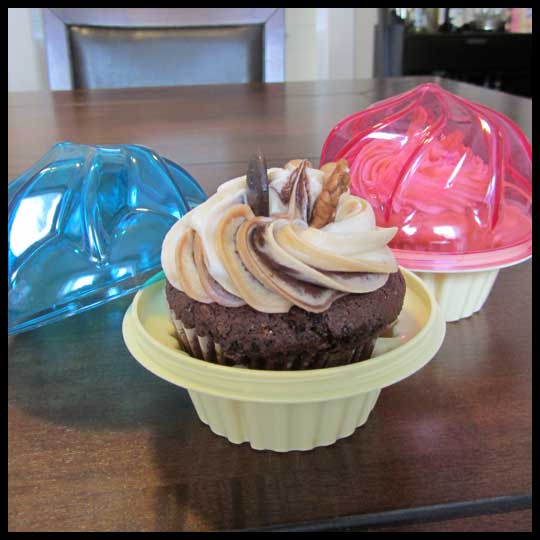 Okay, now on to my review. The first cupcake I tried was the Turtle: 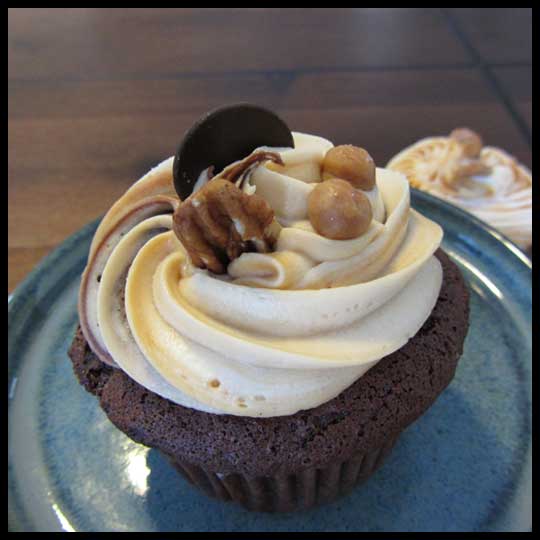 I have to say, I was really bracing myself for the worst, becuase of my last experience, but it wasn’t as bad as I thought it would be. The cake wasn’t the moistest chocolate cake I have ever had (Georgetown Cupcakes and, surprisingly, Roland Park Bagel are), but it also wasn’t as dry as the chocolate cake from my prior experience with their truck. The frosting was REALLY sweet, but I do understand that some people like overly sweet frosting, and that’s okay. The texture was good and it was full of flavor, and that is important. I have to admit though, while I loved the “caramel balls” and chunks of chocolate in the cake, this cupcake probably wouldn’t keep me coming for more.

So, how about the second cupcake? Was that any better? For my second selection, I chose the Apple Caramel. (I must have been in a caramel mood yesterday…) 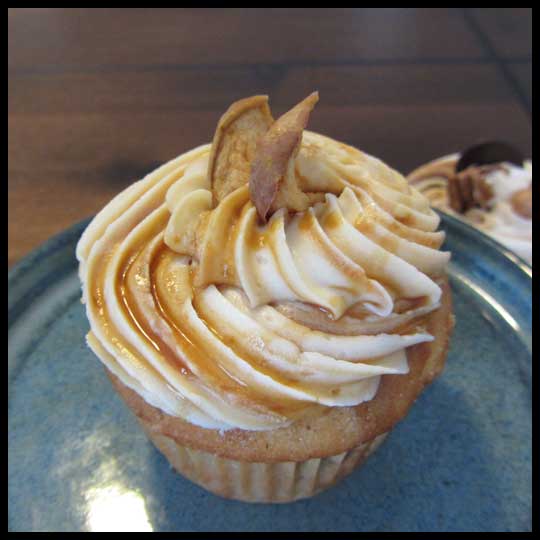 The squishy apple things on top were a bit strange, so I pulled those off, but otherwise this cupcake was the standout of the two. The cake was very moist and filled with apples and caramel. The frosting was still really sweet, but it seemed to be balanced out better by the apple flavor. This cupcake, I would get again.

So, what are my final thoughts? Artisan, dry, or inconsistent? I would have to say, inconsistent. I have no doubts that IcedGems is totally capable of baking a decent cupcake. But I do think that they are not consistent. If they produced a quality product more frequently, 25% of the feedback on that one Facebook post would not have been negative. So IcedGems, I think you should work on your quality control. If you do that, then I have no doubts that you could compete with some of my Baltimore favorites.

UPDATE: Since this review, the Crusaders have been amazed at how much we have been enjoying IcedGems. Not only have all their cupcakes been great, but their customer service has been stellar!