As I mentioned last week in our Christmas post, Elisa and I stopped by Magnolia Bakery‘s Rockefeller Center location this past month since we were in the area. Even though it isn’t our favorite cupcake place in the city, we were both hoping to try their Chocolate Truffle Cupcake, but they were out that night. So instead, we got the Rockette Red Velvet, a classic Vanilla with Chocolate frosting, and a Pistachio cupcake. Unfortunately none of them were very good. Since we already posted about the Rockette Red Velvet in our Christmas post, we wanted to share our thoughts on the other two. 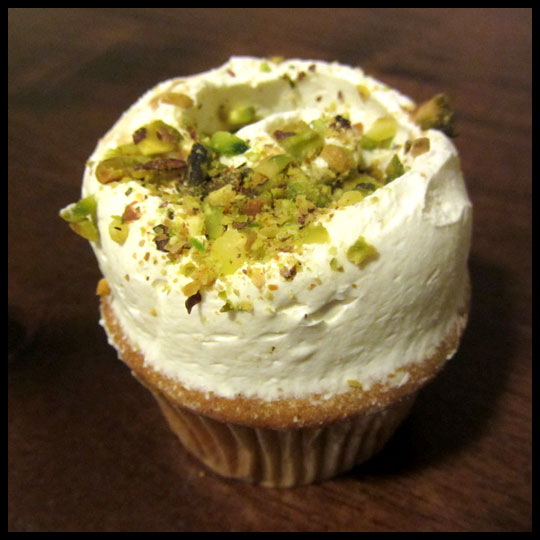 Like the Red Velvet, the cake was very dense and dry. The redeeming quality to this cupcake was the flavor. It really did have great pistachio flavor. I wouldn’t go all the way back to NYC for this cupcake, but it ended up being the best of the three. 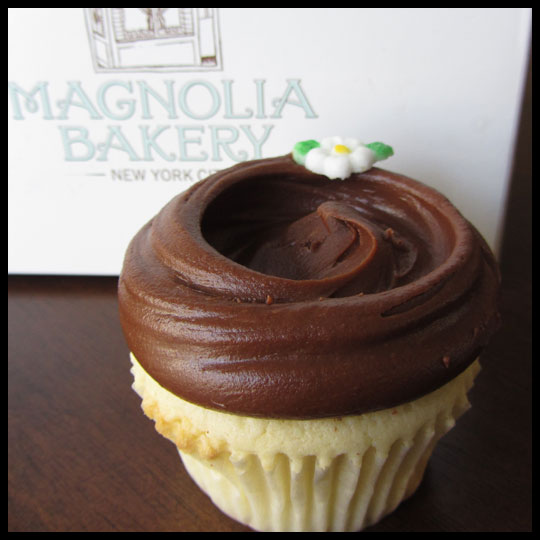 The cake on this cupcake was the same as the Pistachio and Red Velvet. Dense and dry. I’m not sure if everyone experiences this with their cupcakes, but at the rate they were baking them that night, freshness shouldn’t have been an issue. The “cupcake care” instructions on their website state that if you plan to store them (which we did for just one night) they should be kept in an airtight container at room temperature (which we always do). This didn’t change the fact that the cake was still dry. The creamy frosting could have saved this cupcake, but it was more of a milk chocolate, which I’m not really a fan of.

Despite the let down with their cupcakes (which they are known for) Magnolia does have some great aspects that I love. First, the look of their cupcakes. I mean, seriously? How cute are they? They are almost too pretty to eat.

Being a graphic designer, I pay a lot of attention to details like that and they do not cut corners when it comes to this. Even though I only got one cupcake (and a pumpkin whoopie pie – more on that later) they still placed my cupcake in a pretty box and a gave me a pretty bag to take with me. This gives them MAJOR points.

Not only does their packaging look good, but their cupcake boxes are top notch.

See those little “cupcake grips” to the bottom right of the photo above? This cupcake isn’t going anywhere anytime soon. Since they are located in NYC, it is really important to have secure cupcake packaging when you are hopping on and off of buses and subways and making your way through the crowds. Magnolia’s boxes do not disappoint.

I was also very impressed with our service that evening. Since it is the holiday season, it was packed, but the employees were all really nice and kept the line moving along. It’s easy to get frustrated when you are behind the counter dealing with a crowd like that, but they didn’t let that effect them.

Last, – this alone would make me go back – their pumpkin whoopie pie was AMAZING. Like, heart stopping “OMG” amazing. I wish I had taken a photo of it, but that little treat didn’t even make it back to the car. I was only going to take one bite, but before I knew it, I was finished. Unlike the cupcakes, the cake portion was super moist and rich with pumpkin flavor and spices. The cream cheese filling was an appropriate sweetness and had a nice smooth fluffy texture. This whoopie pie was worth the wait in line.

What are your thoughts on Magnolia Bakery compared to other cupcake shops? Let us know, we would love to hear!