We are happy to share another guest review from a new Guest Crusader! Kim has known two of the Crusaders for a very long time and has been following the blog. After reading some reviews, she decided to visit IcedGems Baking’s storefront located in Reisterstown, MD. I (Stacy) also recently stopped by IcedGems Food Truck in Baltimore City, so I’ve added my review after Kim’s. Read below to see what we though!

After reading Crusader Elisa’s review of IcedGems Baking, I realized that the shop wasn’t too far away. Actually it is closer to me than Starry Night Bakery and Coffeehouse, and I have made a couple of trips to visit them (after reading some of the other Crusader’s reviews). So on my way home from shopping with my sister in Bowie, I decided to take a slight detour and see just how good IcedGems was for myself.

I walked into their shop – very cute and quaint – and was greeted with the wonderful aroma of the sweet cupcakes, as well as the very friendly young man behind the counter. He was very patient while I and another couple looked over the selection and between him and the young lady baker, any questions we had about the flavors were answered.

I chose two of the French Toast (one of which I shared with my husband that night), a Chocolate/Chocolate, and a Scarlett O’Hara (red velvet with raspberry icing).

We first tried the French Toast, which you could tell was a cinnamon cake with a maple frosting. The combination was perfect and reminded us exactly of French Toast you’d have for breakfast. After trying this, I just wanted to try the others that much more!

The night after we tried the French Toast we split the Chocolate/Chocolate and the Scarlett O’Hara. My husband’s evaluation was simple – he really enjoyed both of them just as they were!

I started by trying the cake and frosting from each separately. I have to say, I loved the raspberry icing on the Scarlett O’Hara. It was very light, almost whipped like. Both the cakes were nice and moist, and the chocolate icing from the Chocolate/Chocolate was almost fudgy, exactly how I expected it to be.

After my unusual start to taste testing I went ahead and tried a bite as they were intended. First up, the Chocolate/Chocolate. The fudgy icing and the moist cake went well together. Exactly what a choc-aholic like myself likes. 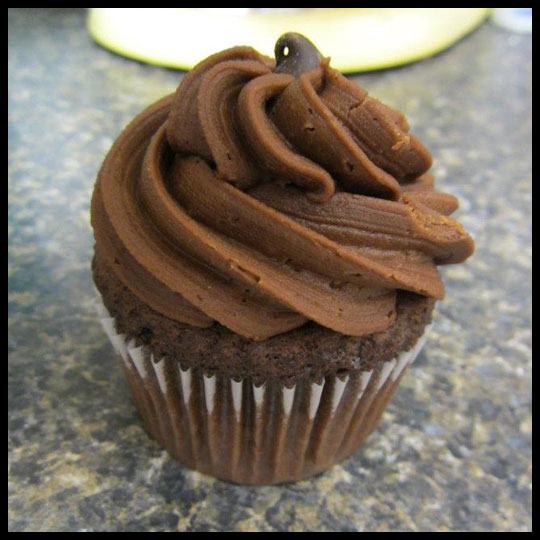 Next up, the Scarlett O’Hara.

I can’t say I know red velvet as well as “The Red Velvet Crusader,” but I thought it was pretty good. However I was not a fan of the red velvet cake combined with the raspberry icing. I am also not usually a fan of cream cheese icing either, but here I think it would have been a better choice.

I can’t wait to go back and try some new flavors!

Since we were posting Kim’s review on IcedGems Baking, I thought that I would share two cupcakes I got last week. The IcedGems’ Baking Truck drives around Baltimore City posting their location to their Facebook and Twitter pages, so on one of these days – even though the truck wasn’t in walking distance – I decided to pull myself away from the computer and find the truck at their next location. I was only going to get one cupcake (I was trying to be “good”) but before I left I saw on their Facebook page that if you said a secret phrase you could get a 2nd cupcake for free. So, I came back to the office with a Blueberry Chip cupcake and a Birthday Cake cupcake. 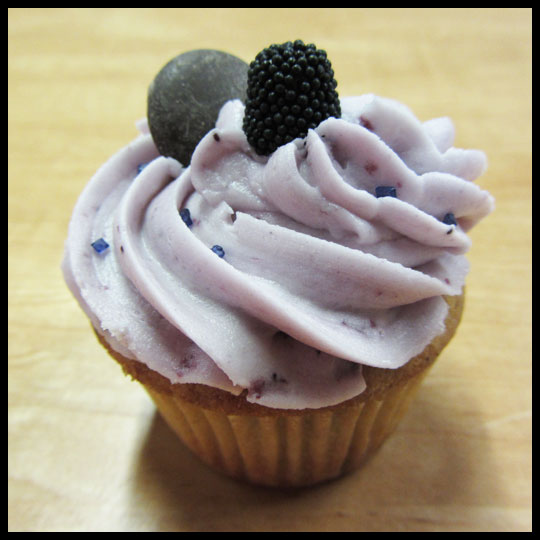 The Blueberry Chip was a must have for me. When I saw that flavor posted I knew I had to try it. It totally lived up to my expectations. The frosting was sweet and full of fresh blueberry puree. Alone, it was a bit too sweet for my normal liking, but combined with the densely moist cake filled with fresh blueberries and chocolate chips it was a perfect companion. The addition of the big chunks of purple sugar added a nice crunch texture. I savored each bite of this cupcake not wanting it to end.

I had already decided that I would save the Birthday Cake for the next day and it took everything in me not to scarf that down as well.

Lunch time couldn’t have come fast enough. I didn’t want to eat the cupcake on an empty stomach, for fear I would just inhale it and not take time to enjoy the flavors, so after eating it was FINALLY time to bite in. Elisa had told me that this was a good cupcake but WOW! It screamed “Birthday Party!” I thought the Blueberry Chip was amazing, but this simple vanilla cupcake with vanilla butter cream dotted with sprinkles might have taken first prize. With every bite I couldn’t believe how good this cupcake really was.

The funfetti cake was dense but moist and the frosting was also dense but creamy. And how can you not like sprinkles inside your cupcake? I’m a big fan of funfetti and this puts my boxed mix to major shame.

I’ve had IcedGems in the past and been a bit on the fence about them, but they are definitely doing something right. Jenn is the only Crusader left who needs to sample IcedGems for herself, so I hope when she finally does, they live up to the hype Elisa and I have built!