I know a lot of people (like Crusader Elisa) who say bacon makes everything better, but that might not always be the case. Recently, my wonderful hubby brought me back a Salted Caramel cupcake from Hamilton Tavern. They have about 3 desserts on their menu, and this is one of them. 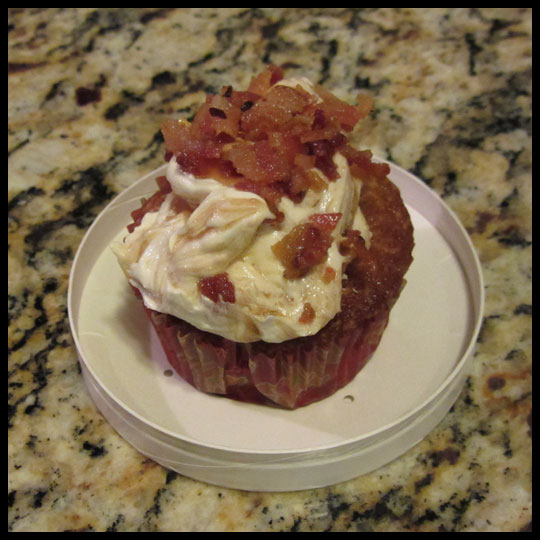 Even though this cupcake typically comes topped with bacon, like the photo above, my hubby asked for it without since I don’t eat pork. Someone in the kitchen must have forgotten not to add it because when I opened it at home, there was bacon on it. No big deal for me. I just removed all the little pieces while trying to leave as much frosting behind as possible. 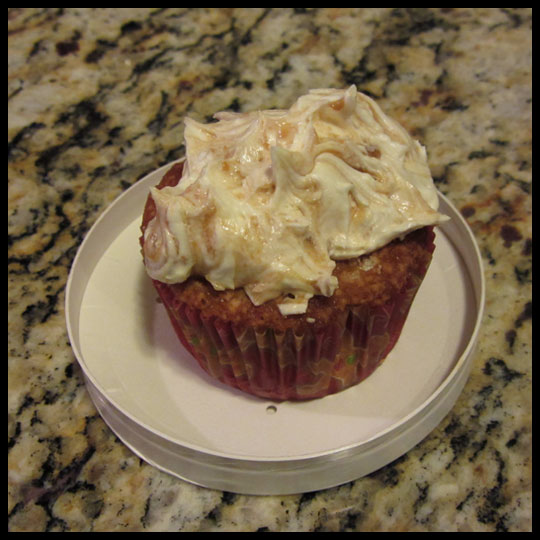 End result: A Salted Caramel cupcake ready to be devoured.

I enjoyed every salty sweet bite of this cupcake. The frosting was sweet, creamy and full of Salted Caramel flavor. The cupcake was moist with a bit of a crunchy caramelized outer coating.

My friend and fellow cupcake lover, Erin, also recently tried this cupcake. Unlike me, she does eat bacon, but she thought that the cupcake didn’t need it. She told me that “the bacon alone was good, I just thought the icing was better without it…It was too much salt (bacon + salt chunks). If the icing hadn’t had salt in it, the bacon might have worked better.” She added that she decided to just eat the bacon off first and then finish the rest of the cupcake.

So, my question is, does bacon really make everything better? I’m really curious to hear your thoughts. Also, if you have a chance, head over to Hamilton Tavern and try this cupcake out and let us know your thoughts! Either way, you won’t be disappointed. This cupcake is scrumptious!

4 thoughts on “With Bacon? Or Without?”