Traveling without eating cupcakes is a no-no when it comes to the Crusaders; so on a recent trip to St. Augustine Florida I knew I had to find some cupcakes to review! Luckily my sister knows of my love of cupcakes and told me about LuLi’s Cupcake  and how much she loved their Tiramisu cupcake called “The Godfather.” She’s not a huge sweets person, so if she likes it, I knew it would be really good. We took a trip down Rt.1 and stopped in for some cupcakes.

The sweet shop was easy to get to and adorably decorated! The staff were very friendly, and on top of cupcakes, they serve ice-cream, gourmet coffee and other sweet treats. The glass case that housed the cupcakes was well organized with pink polkadot signage to explain each flavor. I settled on four cupcakes, below are their reviews. 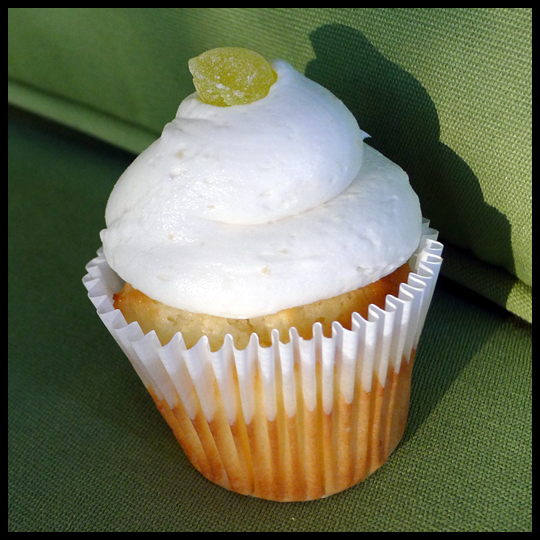 Lemon with a real twist! This lemon cupcake had a ginger flavor to it that was exciting and packed a bite. The sweet buttercream icing was a great complement to the cake, whose complex flavors fully developed after you were finished. The cake was light, moist, airy and delicious. There was a very generous layer of icing on top and the Lemonhead candy garnish was a treat too!

This classic red velvet had a twist with crunchy pecan bits on top! The cake was FLAVORFUL and rich – and definitely the color of a fire truck! This is a red velvet cake done right! The cream cheese icing was everything it should be, creamy, cheesy, sweet (but not too sweet) and married well with the cake. The pecans on top added a layer of texture to this cupcake that I haven’t seen in many red velvet cupcakes. Definitely a red velvet I would like to have again! 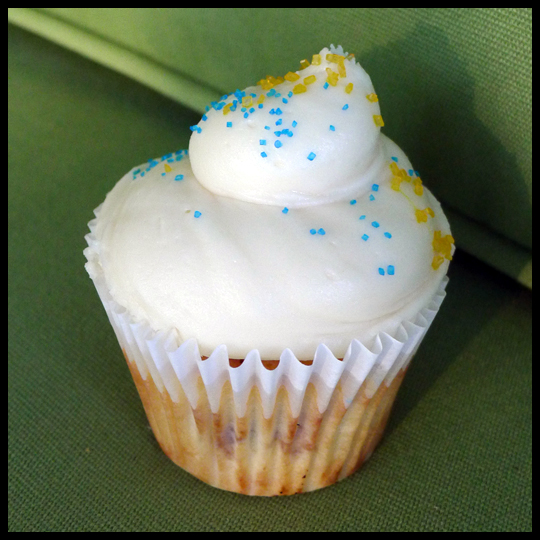 Blue and yellow sugar sprinkles delicately danced on the top of this very interesting cupcake. The lemon, blueberry, and poppy-seed cake tasted a bit like black licorice to me – which isn’t a great thing, as I dislike black licorice immensely. The dried blueberries in the cake saved it a bit, as they added texture and much needed blueberry flavor. The cream cheese frosting (the same that was found on the red velvet) was delightful. This was a “special” cupcake for the day, and while it was not my favorite of the four, it was very interesting… so much in fact that I wouldn’t mind trying it again.

“The Godfather” Tiramisu cupcake with mascarpone cheese frosting reminded me of the movie quote, “take the gun, leave the cannoli,” except I would flip that statement around and replace cannoli with cupcake. I would “go to the mattresses” for this cupcake! WOW! The cake had a fantastic coffee flavor, but wasn’t soggy from being drenched in it as it was not dipped into espresso, but the coffee flavor was incorporated into the batter. The icing was smooth and tart – this pairing of cake and icing was simply perfect, as was the icing to cake ratio. I love tiramisu, but this cupcake really is the Godfather of the traditional dessert.

Visiting LuLi’s was a perk to an already wonderful trip to Florida that included some great weather and even better company. I can’t wait to taste more flavors next time! If you’re ever in St. Augustine, stop by and say hi to “The Godfather” for me – well, order one at least.