Just to make sure there is no confusion, yesterday we reviewed Roland Park Bakery and Deli, but today we are reviewing the new cupcakes at Roland Park Bagel Co. I promise we are not trying to confuse you, but we couldn’t wait any longer to share with you their spring and summer cupcake flavors – and the new baker. We review Roland Park Bagel Co. last August on our blog and then again in November on KimberlyLoc.com. Prior to hiring a new baker, their cupcakes could be a hit or miss. Sometimes they were great, while other times left us a bit disappointed. Hopefully their consistency has improved with the new bakery, but until we find out, we are loving their new flavors!

Since Crusader Jenn is a stay at home mom, she often comes to my office (where she also used to work) to visit with the other employees and to have lunch. Everyone always enjoys seeing her and her daughter, Leah, and of course I love any excuse to get out and eat cupcakes with one of my best friends! Despite the curt demeanor of the women who runs the front counter, we often find ourselves at Roland Park Bagel Co. for a tasty panini, a cup of coffee, and obviously, cupcakes. Don’t let her attitude fool you though, she is actually quite nice, but is trying to run a tight ship with the busy lunchtime crowds.

On this day we decided to share 3 of their new flavors: Pink Lemonade, Banana Split, and Piña Colada. 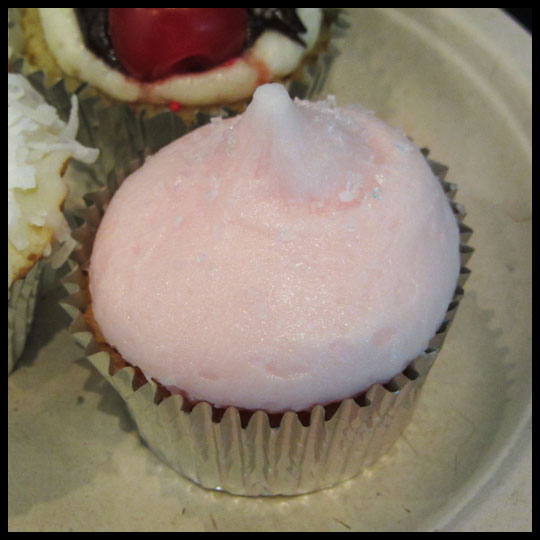 The Pink Lemonade was pure bliss with our first bite. The cake was moist and the frosting was very tart and sweet, just like you are sipping on a real pink lemonade on a hot summer afternoon. This cupcake is a perfect warm weather treat! 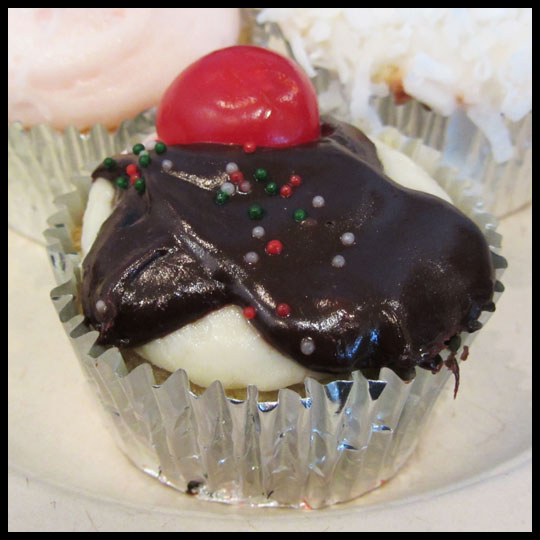 Next we tried their Banana Split cupcake. For us, it was good. Not the best I’ve had, but not bad either. The cake on ours was a bit squishy in the center. We think this was because there may have been a fresh banana slice placed on top of the cake either during the baking process or after. So, while the flavors were there, we were having some issues getting over the strange texture. Before trying this cupcake we had already bought a 2nd one to bring back to my co-worker (who is also an extreme sugar-holic). She didn’t waste anytime diving into it after we gave it to her, but her cake strangely didn’t have the same texture problem. So maybe ours was just a fluke?

Jenn and I are both coconut (and piña colada) lovers, so we saved Roland Park Bagel Co.’s Piña Colada cupcake for last. 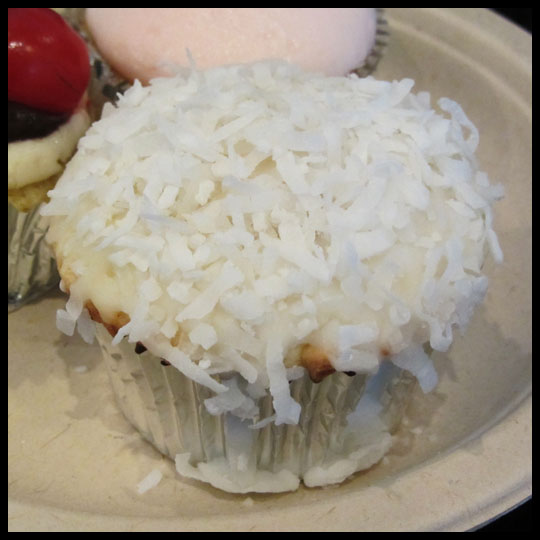 Boy am I glad we did! With it’s rum glaze, soft cake, and strong coconut flavor, at first it was tough to decide which was better, the Pink Lemonade or this one, but then we hit the pineapple puree filling. The pineapple filling took this cupcake to a whole new level! I might as well have been sitting on the beach eating this cupcake with a little umbrella sticking out of it.

I’m really excited to see what other new flavor combinations Roland Park Bagel Co.’s new baker creates. Hopefully they will be consistently good and creative, which will definitely keep these crusaders going back for more!