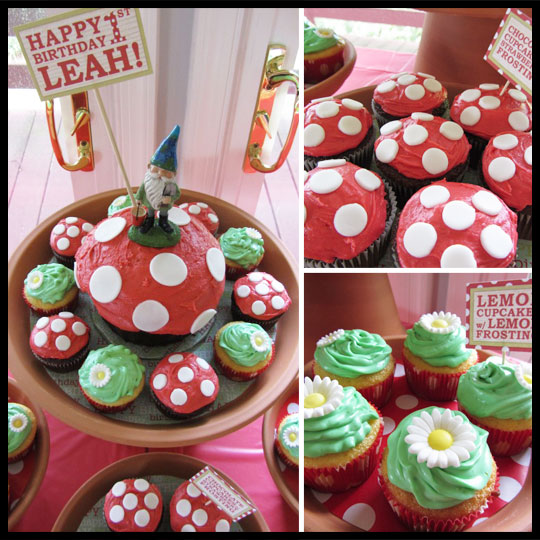 Crusader Stacy and I began brainstorming ideas for my daughter’s first birthday, oh, about 9 months ago…when she was 3 months old. Seems extreme, I know. But, with no weddings, showers, or other birthdays on the horizon, our creative party juices needed to be released. I saw a gnome/forest friend theme on Design Dazzle and really liked the cute little mushroom top cupcakes and matching jumbo cupcake. I thought, “I can do that!” I also liked that it seemed to be an original idea, and I still kind of love gnomes going back to my “David the Gnome” days.

After casually researching here and there, it was June before I knew it! I solidified the “Garden Gnome” theme after finding some cute garden decorations that I wanted to tie in with the gnomes. I designed my own invitations to set the mood and décor for the party, scanning in felt flowers and scrap-booking paper to create texture and layers.

The Cupcakes: Chocolate Strawberry and Lemon

The cupcakes ended up being more of a challenge than I thought they would be. I started with box mixes for the cake because I wanted that to be as easy as possible since I’d be making my own frosting and decorating the cupcakes in a special way.

This was my first time working with fondant. I purchased Wilton’s ready to roll fondant and found it very easy to work with.

I researched working with fondant and found out how to store it so that decorations could be done a few days prior to using them. This was very helpful in managing my time for party preparations!

The polka dots were for the chocolate strawberry cupcakes and cake. A week before the party I decided that, since I prefer adding flavor to my homemade buttercream, the chocolate cupcakes would be topped with a strawberry buttercream. I found a recipe on Baking Bites that looked easy and tasty. The frosting ended up not being as easy as I thought though, particularly to work with. It was very runny (probably a combination of the house being warmer, all the red food coloring I added, and the amount of strawberry puree used in this recipe) so I added a lot of confectioner’s sugar, probably 3-4 times what the recipe calls for. Now I know why fresh fruit buttercreams can be so sweet! Despite some trial and error with working with the frosting, the flavor was still good!

The next hiccup I encountered was with the lemon frosting. I’ve made this frosting before, so everything was going well until it came to piping. I planned on using a grass tip, but moments before getting started thought to myself, “Hmmm…I bet the lemon zest isn’t going to fit through the piping holes.” Sure enough, it didn’t work. Since I was already working with a particular size, I was limited with my options, but chose another decorating tip and got wonky results. 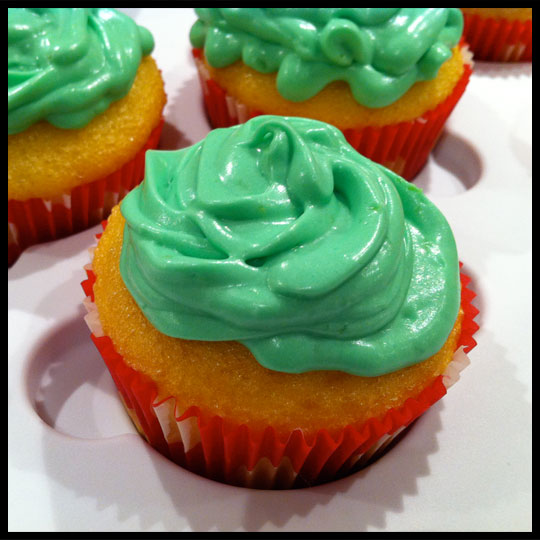 My hope was that after adding the Wilton decorating daisies (thank goodness for another time-saving purchase!) the cupcakes would look okay, and I think they did! 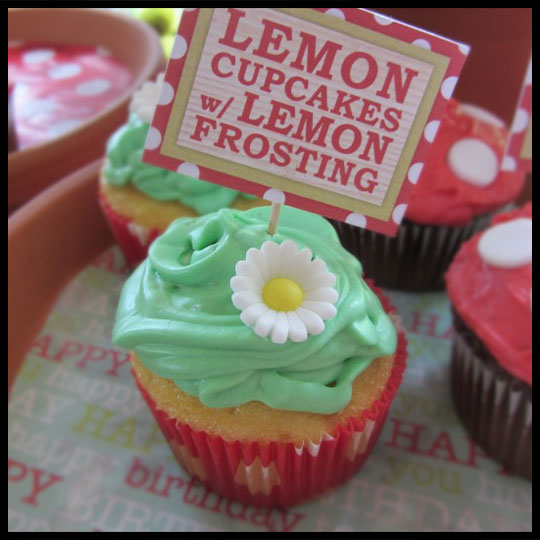 Even though I chose to do fun, summery flavors, there was still something for everyone and I got more compliments than ever before. I think the strawberry buttercream will make an appearance again in the future! 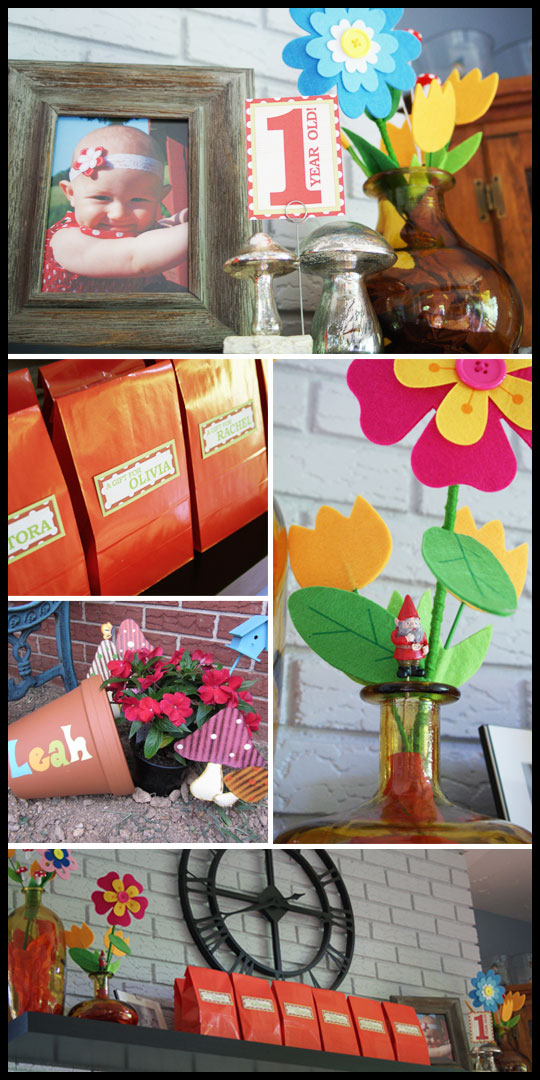 We had a sandwich buffet in the kitchen for lunch, and beverages for children and adults outside, but the real star was the dessert table. It was set to impress. Planters turned into cupcake displays, Rice Krispies balls (one shaped like a mushroom and decorated to match…thanks to Crusader Stacy!), candy flower arrangements, fruit dip, and cookie dough dip. We also set out a basket of bags and cups and encouraged our guests to take treats to-go.

The party was so much fun and, even though Leah won’t remember it, she had a great time in the moment and that’s all that matters. Crusader Stacy and I always had the best birthday parties growing up, so I hope to do the same for Leah. Now I just have to start planning next year’s!