Sunday’s Westminster Cupcake Picnic was another successful gathering, with help from Joel of Josie’s Confections. More cupcake lovers were able to make it out to the Westminster Community Pond and the cupcakes were plentiful! We scored a great spot under the pavilion, next to the playground, which worked out well for some of our youngest attendants.

(Crusader Elisa, Guest Crusader Beth, and myself hanging out while others arrived.)

Although sitting on blankets at our DC Cupcake Picnic made it really feel like an old-fashion picnic, it was nice to have the tables this time. The breeze felt great sitting in the shade. It couldn’t have been a better day for a picnic!

We were admiring the cupcakes that had already shown up, but holding off digging in. It seemed like it would be more polite to wait until some of the others arrived. But then our little niece Lylah said, “I want a cupcake.” With that, the cupcaking began and didn’t stop, as more people showed up with their picnic contributions.

Cupcakes that were in attendance:
1) Joel brought some of his new Josie’s Confections’ boozy flavors, including Tiramisu with a Kahlua filling. Look out for a full review of Josie’s Confections coming later this week.
2) Josie’s Confections’ Mango Passion Fruit and Rum & Coke.
3) Josie’s Confections’ Ciroc Red Berry Lemonade.
4) Robin and Camille came with homemade marble cupcakes topped with chocolate ganache.
5) Beth brought an assortment from Fresh Bakery. We’ve reviewed Fresh a few times but this was the my first time tasting their Creamsicle and it had the perfect Creamsicle flavor.
6) Rachael brought her homemade Snickers cupcakes, which I also tried at her daughter’s 1st birthday and are always a hit!
7) Crusader Elisa made Honey Grapefruit cupcakes, two ways. One had a grapefruit curd filling and the other had a honey filling. Keep an eye out for a full recipe review soon!
8) I brought these store bought cupcakes that came from Walmart. Flavors included Lemon, Vanilla Bean, and Triple Chocolate. For those curious about how these full-size Walmart cupcakes tasted, I’ll be doing a review next week.
9) Crusaders’ Dad brought Golden Snitch cake pops, extras from a Harry Potter birthday party he hosted the night before. Guest Crusader Beth was very excited to see these there!
10) I think these Pink Lemonade cupcakes also came from Robin and Camille’s group. So many cupcakes, it was hard to keep track! After tasting and complimenting them, I found out that they were made with Pillsbury’s Pink Lemonade cake mix.
11) Another candy bar themed cupcake came from Guest Crusader Kim, who wrote about her first experience making these for her 30th birthday party.
12) Crusader Stacy made Lemon Blueberry cupcakes and jazzed them up for the summer with some fancy decorating. She’ll be featuring these in a post coming soon!

(With so many cupcakes, we learned that there would be a lot of cupcake-exchanging going on. This time the Crusaders provided a “to-go” option for our guests.)

At the last picnic we had a cupcake eating challenge and thought maybe we’d see if anyone wanted to take on “The King” and try to beat his time of 5 cupcakes in 3 minutes and 45 seconds. There was one brave lady, Simone, who stepped up to the plate (or in our case the picnic table…we ran out of plates that could fit all 5 cupcakes). 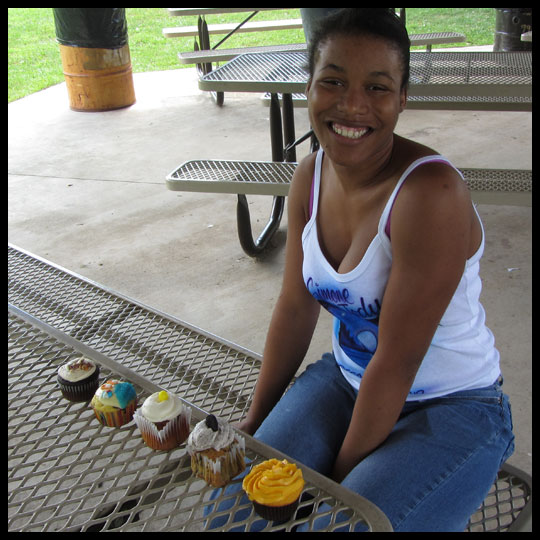 (Simone with the 5 cupcakes she selected. We admire her courage in taking on The King!)

She attacked those cupcakes with gusto, but in the end Joel gets to keep his reigning title as the real “Cupcake King.” We were very proud of Simone’s attempt and she left with a prize pack as a thank you for participating. 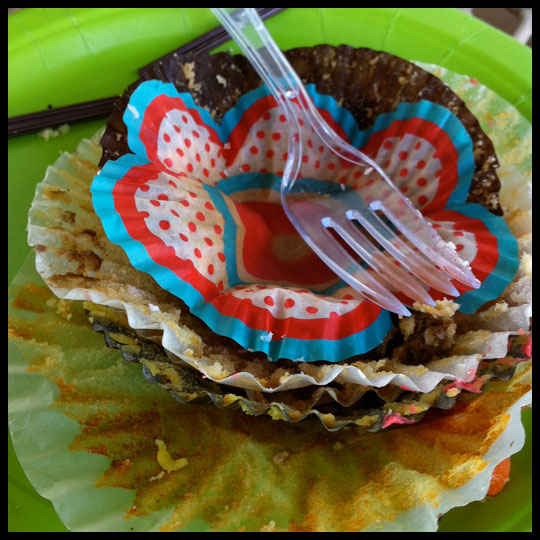 (My cupcake carnage…Those cupcakes didn’t see what was coming to them.)

We hope that everyone had a good time and thank our guests, especially those who drove over an hour from DC and Northern Virginia! It was great to meet other enthusiasts and enjoy the nice day talking about baking, cupcakes, and getting to know one another better. After two great Cupcake Picnics, we are even more excited for our final Baltimore picnic next month and are already getting requests to have a 2013 picnic series! If you are interested in attending the Baltimore Cupcake Picnic, check out more details and RSVP here.