Our friend, Ashley, recently graduated from Lynchburg College and spent her entire last semester sending us photos of all the cupcakes she encountered while there. Since her classes kept her busy, she wasn’t able to write up a review for us, but now that she has finished with school she took some time to share her experiences with us. In her first review she shared the cupcakes she tried from one specific location on campus, Brewed Awakening. In this second review, she is sharing two other cupcakes she encountered prior to graduating.

Other than cupcakes from Brewed Awakenings, I snatched up cupcakes whenever I had the chance. The first one I tried was over Christmas break when I took the train home to Rhode Island.  I was excited to find out that I would have to change trains in New York City and had an hour and a half layover in Penn Station. Normally I wouldn’t be happy about a layover but I love New York so I was excited to be able to spend a short amount of time there.  While there, I wanted to get as much of the New York experience as possible so I was sure to have hot dogs for dinner, spend some time outside, and get a cupcake in the train station.  Sadly I didn’t take pictures of the cupcakes behind the glass but I was quick to snatch up my safety option: peanut butter and chocolate.  I was really excited about this cupcake because it was at least twice the size of a normal cupcake, but it was so big that I decided to wait until I arrived at my destination, where I knew I would be staying in a household with five other people eager to help eat it. 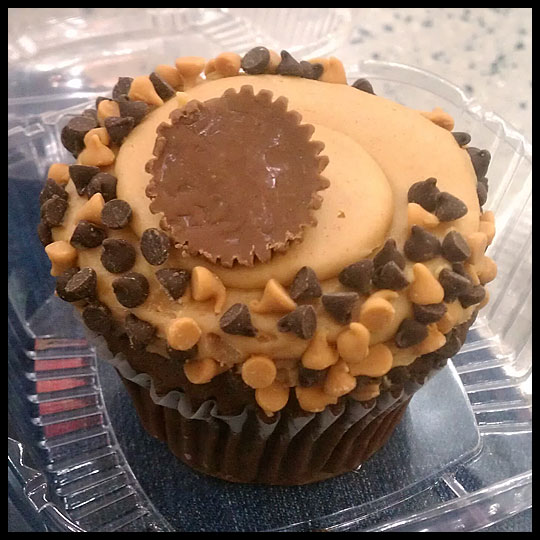 Considering the cupcake was shoved into a backpack for hours and then sat in the fridge for another half a day it was still very good! The cake was moist and the peanut butter and chocolate combination was delicious as always. The only complaint I have is the chocolate and peanut butter chips on the frosting. Although they were tasty they were kind of hard and took away from the taste of the frosting. I would have preferred just the Reese’s cup on the top, but that is just my personal taste and texture preference.  Based on this cupcake though, I definitely want to try other cupcakes at Penn Station!

The next non-Brewed Awakenings cupcake that I had was at an end of the year reception at Lynchburg College. It was a simple chocolate cupcake with chocolate frosting and topped with mini M&Ms.

I was excited when I saw the cupcakes as dessert but at the same time I was not expecting a whole lot because the cafeteria on campus catered the food. Although our cafeteria generally has very delicious cupcakes, I still did not expect much and also was not even sure that they made these themselves. They had clearly travelled a good distance to get to our reception because they weren’t as pretty as some of the other cupcakes I have seen and it was very hard to handle due to all the frosting. After the first bite into the cupcake, though, I was pleasantly surprised. The cupcake was really good! I was afraid that the frosting would be too much at first, however it was a whipped cream base and much lighter than I expected.  The overall cupcake was so good that I actually had another one before I left the reception. They were a pretty big hit and regardless of where they came from they were delicious. I would eat another right now if I could.

My senior year of college was hectic and packed with internship work, thesis writing and applying for a job in South Korea, but my new found interest, cupcakes (thanks to Jenn and Stacy!), made the semester much more enjoyable. Now that I know there are so many different cupcakes out there I definitely can’t wait to try others and look forward to hearing about more from the Crusaders!