When CupcakeCamp DC posted that they had an opening for a fan judge, I jumped at the opportunity. Finally I could put all of my “practice” into use, and for a great cause. CupcakeCamp DC is in its third year and raises money for DC Candlelighters: Childhood Cancer Foundation. I’ve heard criticism about the past years, but being a new event organized by a single person, that’s expected. Each year changes have been made to make a better experience for all who participate. 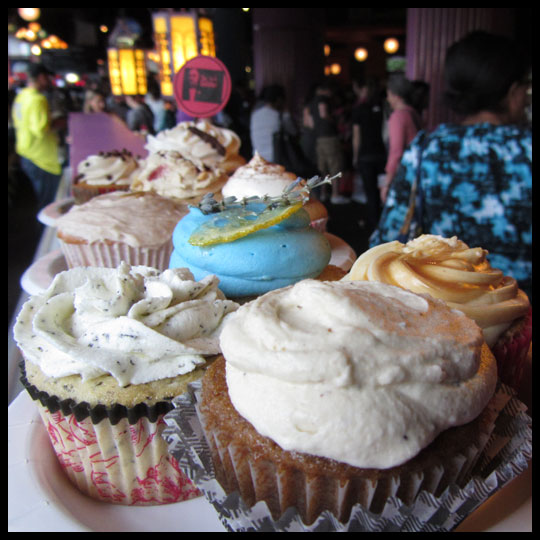 This year the event was held at the very chic Continental Modern Pool Lounge, located in Arlington, VA (but right over the bridge from Georgetown Park in DC). From a judge’s perspective, check-in was super easy. I saw that a line was forming, mostly due to the rain bringing in people from the Jazz Festival across the street, but was able to bypass it with my oh-so-important title. I checked in with a volunteer, who had the list on his phone and took my spot at the judges’ table. The other blogging judges arrived and then cupcakes started coming our way. 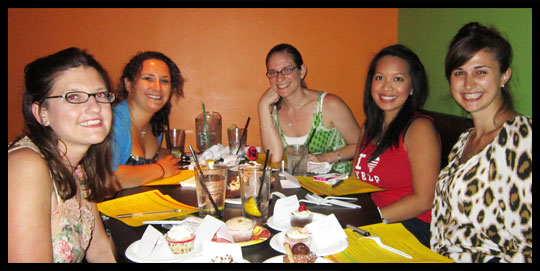 (Judges from left to right: Adrienne from Little Miss Cupcake, Jill from Cuisine Queen, me, Kimberly from Yelp NoVa, and Nikki from Cupcakes for Breakfast.

Judging went fairly smoothly. Cupcakes were brought to us, in no particular order. Finding them on our score sheet was fairly easy, unless a baker switched up their entry at the last minute. We asked for knives to divide the cupcakes among the judges, but there weren’t any available. Luckily none of us were germaphobes, so we decided that we would dig in and wipe off excess frosting and cake on our forks, instead of slobbering all over them. We had to request forks, napkins, water, and a trash bag. The volunteer, who was working hard and running around a lot to bring the cupcakes to us, didn’t look too thrilled with our requests…but how else could we taste the cupcakes? Other than that, the judges were treated well and, to show their appreciation, we all received event t-shirts and awesome swag bags, provided by Izze, one of the event sponsors.

I asked Crusader Stacy for insight from an attendee’s perspective. She said that when they arrived there was a line and it seemed a bit disorganized, but that could have been due to the rain and people who hadn’t registered wanting to get in. Lines also seem to form at these cupcake events because the guests are aware that it’s first come first served. Although the venue could be tight to navigate sometimes, it had a great ambiance. It seems like people enjoyed that you could order adult beverages and there were a lot of areas to lounge and indulge in cupcakes. The venue also offers game tables, like billiards, for added entertainment. Stacy mentioned that she and Crusader Elisa did not realize that the people’s choice ballot was in the brochure, and wished they had known. At the end of the event, it was hard to hear the winners (I think due to background sound…not much you can do about that) and it was a little confusing when announcing the winners was mixed in with the announcing the raffle prizes. Luckily all the winners heard their names called, and we were all very excited that Joel Gill, from Josie’s Confections, took first place for his Chicken N Waffle Cupcake! 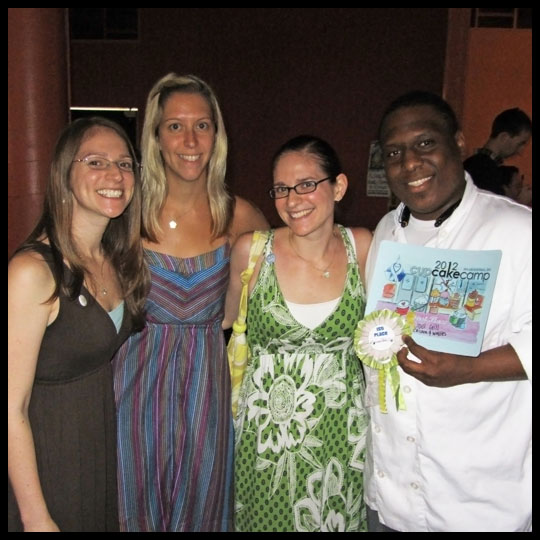 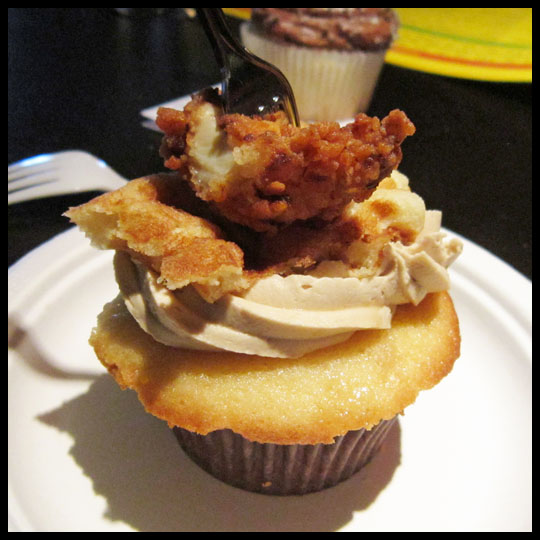 It’s no surprise that we adore Joel’s cupcake, having first had it at our 2012 DC Cupcake Picnic (see Crusaders’ review). What did surprise me was that the other judges were very excited to try a Chicken N Waffle cupcake, especially when most people question this creation. I was relieved when they all agreed that it was the best they’d had all day. 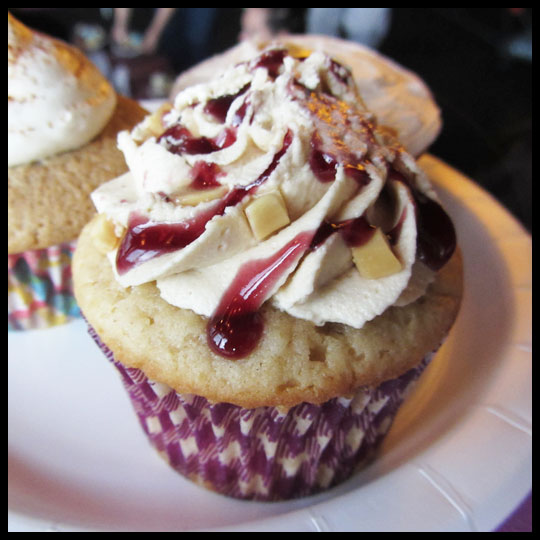 Stacy and Elisa both agreed that this was their favorite cupcake of the day. It had a peanut butter cake with grape jam filling, topped with peanut butter buttercream and grape coulis. They both love the nostalgia of PB&J cupcakes and thought the grape was a nice change from the strawberry jams most bakers use. 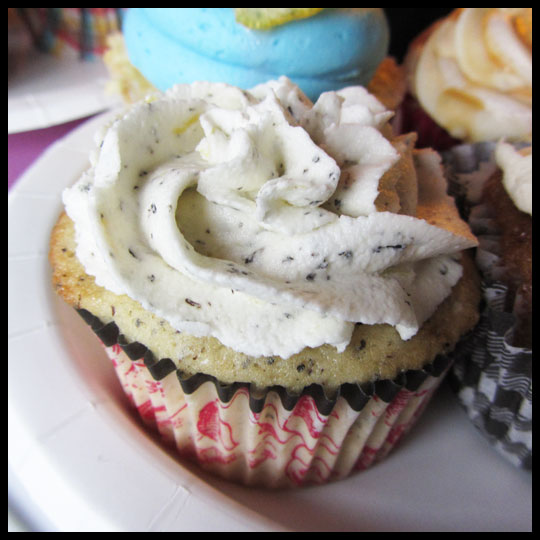 This cupcake was a standout for me on this day. I have wanted to try a tea-infused cupcake and I think Earl Grey was a perfect choice, with its hint of lemon flavor. The base was an Earl Grey buttermilk cake with Earl Grey and lemon buttercream frosting. Crusader Stacy also really liked this cupcake and would like to dabble in making her own tea-infused cupcakes. She described it as, “Heaven for a tea drinker, with light, airy cake and spot-on flavor.” 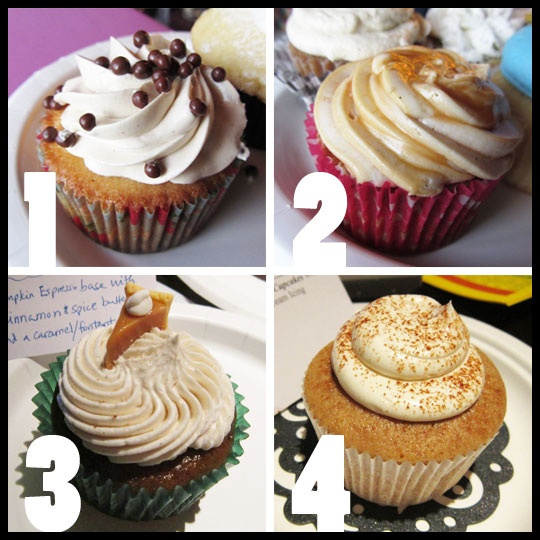 So Many Cupcakes!
The three of us all tasted so many cupcakes at the event, obviously with me trying the most:

The 2012 CupcakeCamp DC raised $2,000 for DC Candlelighters and in the end we all had a really great time, Stacy and Elisa as guests and myself as a judge. I met some great people and I’m looking forward to seeing what next year brings, but I think I’ll just enjoy the event as a spectator or volunteer. Twenty-five cupcakes were A LOT to taste!