When I saw a recipe (and amazing photos) of  Nerds cupcakes from Confessions of a Cookbook Queen, I knew I had to make them. Fast forward to a year or so later, and I FINALLY got around to it. I knew they would be a huge hit at one of the cupcake picnics and was hoping they would be different than anything anyone else brought. Also, who wouldn’t love this super sweet and tart cupcake with its vibrant colors and crunchy bits? No one. That’s who. At least that’s what I was hoping for.

I pretty much followed the recipe step by step, but I was worried that 4 sticks of butter and 7 cups of confectioners’ sugar would produce WAY too much frosting, so I reduced it to about 3 sticks of butter and 5 to 6 cups of confectioners’ sugar (I just added the sugar in until I was happy with the consistency and sweetness, so unfortunately can’t provide an exact measurement). 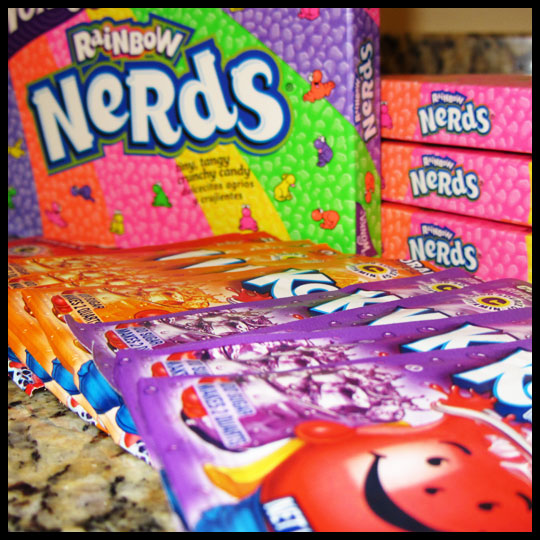 (These are the best ingredients I’ve ever worked with.)

Not only are these cupcakes super awesome, but they were so easy to make. Since you start with a box mix and just add the Nerds candy to the batter, it is a completely no fuss recipe. I was worried that piping three different flavors of frosting on top would be difficult, but I lined all the cooled cupcakes up and piped one color at at a time.

I don’t think my frosting looks as nice as Confessions of a Cookbook Queen’s, but it sure did taste amazing! The Kool Aid that you add to the buttercream takes on a Pixie Stick like flavor, which takes these candy themed cupcakes to the ultimate yummy level.

I have a ton of recipes on my “must bake” list, but I hope one day to have another reason to make these, because they were unique, fun, and very tasty.