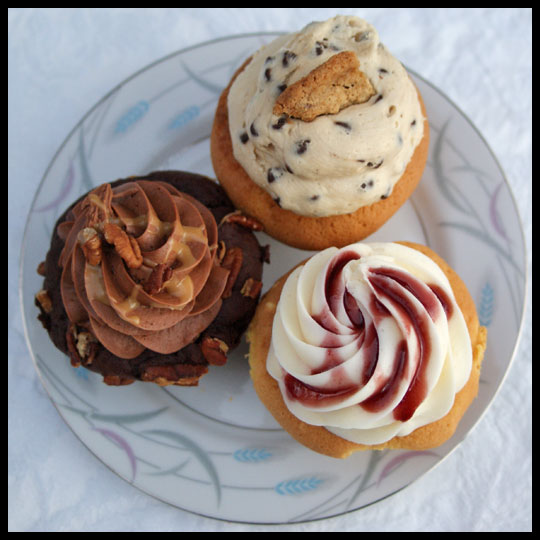 Kupcakes & Co., which was recently listed in our Top 5 on Best Friends For Frosting’s blog, has started offering a line of “Boutique Cupcakes.” They are the same wonderful cupcake, taken up several notches with toppings, fillings, special frostings, and then more toppings. While their daily cupcakes are $2.50 each, the Boutique line of cupcakes are $3.50 each and only available on Fridays and Saturdays. For now they have three flavors: Chocolate Chip Cookie Dough, White Chocolate Cheesecake with a Raspberry Drizzle, and Chocolate Pecan Turtle; and we’ve tried them all!

Kupcakes & Co. started teasing us with their new boutique cupcakes, dropping hints here and there on their Facebook page, with photos of some of the ingredients, fillings, and frostings. As soon as I saw the chocolate chips in one of their posts, I knew there would be a Chocolate Chip Cookie Dough cupcake, and I had to have it. This really was the cupcake that brought me in on the day the Boutique line was released.

As an avid cookie dough lover, going so far as to make a small batch just to eat the dough, you can probably imagine my excitement when I first bit into this cupcake to realize that everything about it tasted EXACTLY like chocolate chip cookie dough. My exact thought was, “This is unreal! It’s like magic!” The frosting is already perfect and packs tons of chocolate chip cookie dough flavor, and then they take it to the next level with the cookie dough filling (which is actually baked in but maintains a doughy quality…I’m telling you, it is magical). I’ve been dreaming about this cupcake ever since.

You can sense the thought and time that Kupcakes & Co. has spent on creating these special cupcakes. The next time you are in their area (on a Friday or Saturday), I recommend stopping in and indulging in one of these Boutique treats. Which do you think you’d choose?