Learning and growing as a cupcake baker this past year has been really fun. I feel more confident in my cupcake-making abilities and achieved my goal of making from scratch cupcakes that were also filled. (Yay for keeping one resolution of 2012!) Finding a new challenge for 2013 was easy. The Crusaders have already tried our hands at savory cupcakes (read Crusader Jenn’s Pot Pie review) and I knew after talking it over with them that I wanted to challenge myself with filled savory cupcakes!

My first savory cupcake flavor combination was inspired by the fig and goat cheese cupcake that Fraiche had on their menu when we visited them this past October. Figs and goat cheese are favorite foods of mine, and I couldn’t imagine not liking a cupcake that included them both.

After my usual scouring of the internet for recipes, I ended up not finding anything that was perfect for my savory idea, so I came up with my own combination of walnut cake, fig compote filling, goat cheese frosting, balsamic reduction drizzle and fresh cracked black pepper. Modifying recipes used to scare me, but this time around I let my cooking sense take over and tweaked things where it felt necessary. For the cake, I added more walnuts to the batter, as well as adding clementine zest for a citrus balance. For the fig compote I added orange juice to replace the zest, added 1/2 cup of honey and a bit of flour to thicken it (note: you must be sure to cook it thoroughly or your filling will taste like flour). I only used 1/2 a cup of confectioners sugar in the frosting because I didn’t want it to be too sweet and I wanted the cheese to stand out.

After baking the cupcakes and making the filling, I let them both cool while I made the balsamic reduction and frosting. It was interesting making the reduction, as it is something that I have eaten out quite a bit and never realized was so easy to make. Once everything was ready and cooled I filled the cupcakes with the very yummy fig filling (with my very tiny spoon).

I drizzled the balsamic reduction, and tasted… but something was missing. Something spicy, or hot, or… peppery! I cracked some pepper onto one of the pieces and tasted it. Yes – that’s just what it was missing! I was shocked at how many flavors unfolded as I ate the rest of it. 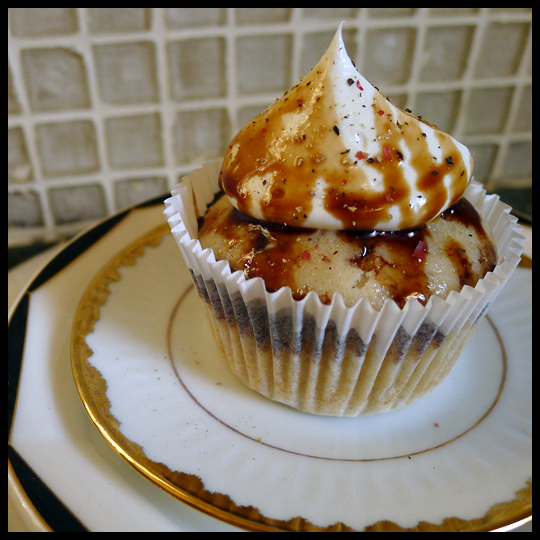 The next day I took them to work and had my co-workers (aka: my tasting team) give me their feedback. Other than the cake being a bit on the dense side, all of the feedback was positive. Even people who don’t usually like goat cheese found it impossible not to finish every bite. And they commented on how delicious the fig filling was and how smooth the frosting turned out. (I swear I don’t pay them to say these things.)

This cupcake really was quite a success, from the not-sweet walnutty cake all the way to the cracked pepper sprinkles. It might not be a cupcake for everyone, but it is definitely my kind of savory!