Let’s be honest. I think we ALL know you really only go on a cruise for two reasons: food and alcohol. Sure it’s great to relax, see some new sights, and meet some cool people, but really, everyone on that ship is there for the buffet and daily cocktails. We all know this, and that is what makes a cruise such a wonderful thing.

When my husband, Ken, and I decided to book a cruise for our big yearly vacation, I was obviously hoping to work cupcakes into it somehow. I noticed that some Royal Caribbean cruise ships actually have a cupcake shop on board called the Cupcake Cupboard, but sadly, our ship did not. I figured with all the desserts and buffets though, there were bound to be some cupcakes eventually, so I boarded the ship confident that I would eat at least one cupcake on my journey.

Our first day was spent at sea, exploring the ship, and checking out all the eating options. After lunch at the buffet, Ken and I passed the main dining room and saw a spiced rum cake on the menu. Never one to pass up a tasty treat, we headed in and were seated at a table with about four or five other diners. Luckily, I wasn’t the only one ordering just dessert.

Now, I know this isn’t your typical cupcake, BUT it is a cake baked in a cup… so technically, it’s a cupcake. At this point I wasn’t sure if I would encounter any actual cupcakes, so I enjoyed every bite of this spiced rum cake with a soft center and slightly crunchy exterior.

The next day we docked in Port Canaveral and opted to take the shuttle to Disney World to spend the afternoon at Epcot. I absolutely love Disney World, but had never been to Epcot before, so was excited to walk around, ride some of the attractions, and find each of my nieces a special gift.

(Ken and I posing for a quick picture in “Italy.”)

I have read that you can find cupcakes in Disney World, but Epcot is a big park, with tons of shops and places to eat, so I wasn’t 100% sure if I would. However, my cupcake luck must have been spot on because within a half hour I had a cupcake in hand.

Ken and I stopped for lunch at Sunshine Seasons in The Land and before I even decided on what food I wanted to eat, I was buying this gigantic Cappuccino cupcake. It was about $4 dollars—which I think is good considering its size and the fact that amusement park food is usually about twice as much as it is anywhere else. I wasn’t really expecting much, but was pleasantly surprised that the cake was moist and the overall flavor really delightful. Even my non-cupcake-loving-husband (don’t ask… I don’t get it either) enjoyed it, saying the cake and whipped cream filling were both nice. I didn’t think there was enough cappuccino flavor, but Ken, who isn’t an avid coffee drinker like me, said he could taste it in the frosting.

After lunch we continued on our adventures around the world and beyond: flying to Mars, spotting Donald Duck in Mexico, stalking Snow White in Germany, and stopping for photos in Italy. When we reached The Liberty Inn restaurant in The American Adventure section of Epcot I noticed a very large gingerbread house, only to discover that they were selling mini seasonal cupcakes.

(They must be used to people taking pictures because they smiled at the camera without even being asked.) 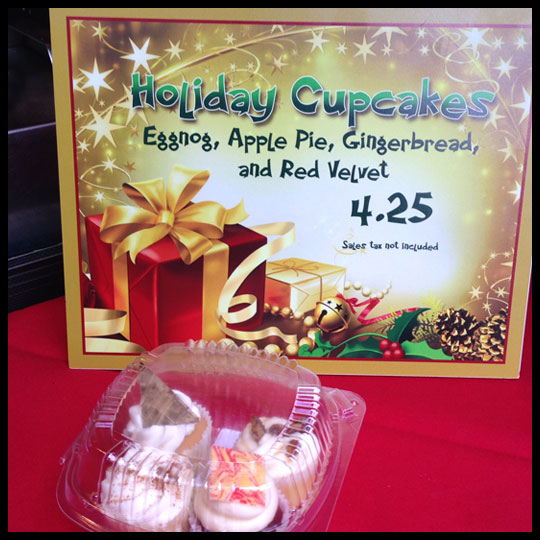 (I didn’t think twice about getting these holiday cupcakes.)

I was most excited about the Eggnog and Gingerbread, but since you couldn’t pick and choose at this stand, we took away all four flavors. Feeling positive after his first cupcake tasting of the day, my husband agreed to split these with me, which meant we had about a bite each. 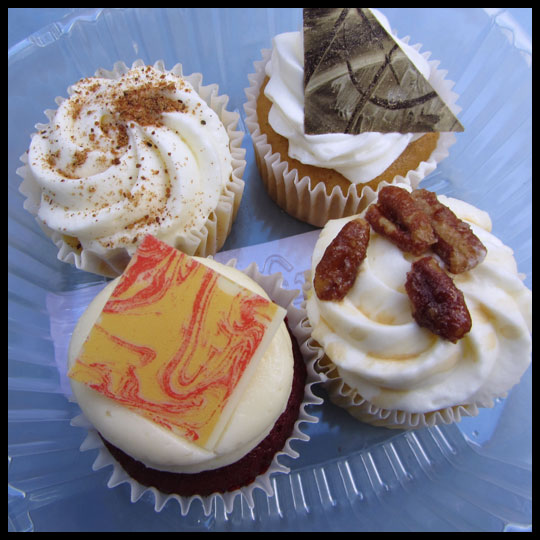 The favorites in this group were the Gingerbread and the Apple Pie (which had a wonderful apple pie filling and a good contrasting texture with the candied pecans). I had high hopes for the Eggnog, since they are typically one of my favorite winter cupcakes, but this one had too much filling which left the cake soggy. The cake in the Red Velvet was pretty bland, but the cream cheese frosting was amazing. Ken also really liked it and actually couldn’t recall trying cream cheese frosting before (I know, who am I married to?!).

Back at the ship that night, I didn’t think my cupcake luck could improve, but I was wrong (well sort of…). While we were walking around the upper deck, I looked in the buffet room window and saw the staff put out cupcakes for the late night buffet.

(Vanilla and Strawberry cupcakes on board the Royal Caribbean cruise ship)

I wondered if this cupcake filled day could get any better, but it couldn’t. The cake was a weird dry yet sticky texture that lacked any flavor and the frosting wasn’t nearly sweet enough. Oh well… at least I didn’t have to pay for them. Plus, I knew the rest of the trip would be filled with plenty more food, drinks, and desserts. 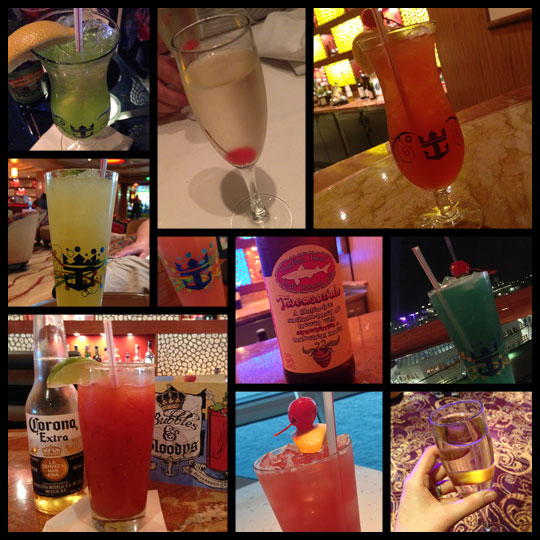 (A glimpse at some of the drinks from the cruise. Every day I tried the daily signature cocktail. Some were good, and some were okay, but it was fun to keep my record going.)

While no more cupcakes presented themselves the rest of the trip, I couldn’t believe the luck I had on our first day at port, and I of course still ate some amazing sweets like mudpie, souffle and crème brûlée. 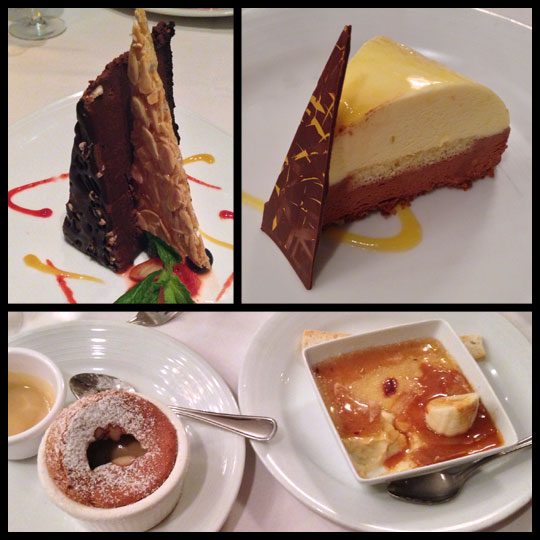 (Mudpie from the Chops Grille, the main dining room’s fancy take on a Jaffa Cake, Chocolate Souffle with espresso drizzle, and Baily’s Crème Brûlée—yep, that’s two desserts in one night you see there. Why not? It’s a cruise!)

All in all I would say that, with or without cupcakes, my first cruise experience was great. It was so nice to sit back, relax, and eat all the food you could manage without even lifting a finger. I want to go back.

3 thoughts on “Cruisin’ and Boozin’ (and Eating Some Cupcakes Too)”