We love getting tips and cupcake sightings from our family, friends, and readers. Without their recommendations, we’d miss out on so many opportunities to try new cupcakes. A recent “tip-off” lead us to Groovy Girl Cupcakes, a trailer fully equipped with a commercial kitchen, located in Cockeysville, MD.

We don’t typically find ourselves in that area very often, but we each recently completed an eight week beginners’ calligraphy course with CCBC. So, every Thursday after work I would head up York Road for our evening class. I’m not sure how I missed the cupcake trailer, maybe because it’s parked by a gas station and I’ve never thought to glance in that direction?

After talking with Crusaders Jenn and Elisa, I decided to get just two flavors (Elisa wasn’t joining us for class that evening). They had about 8 flavors to choose from and it was really hard to just pick two, but I settled on the Butter Pecan (that was an easy selection) and the S’mores (came highly recommended).

Jenn and I decided that it probably wasn’t the best idea to eat cupcakes in the middle of our calligraphy class (things can get messy with pens, ink, and paper strewn all over our desks), so before going our separate ways, there was a solid debate on who would take which cupcake. Normally, we would just cut them in half, but we hadn’t taken any pictures and didn’t have a knife. In the end, since I bought the cupcakes, I won with my choice of the Butter Pecan. 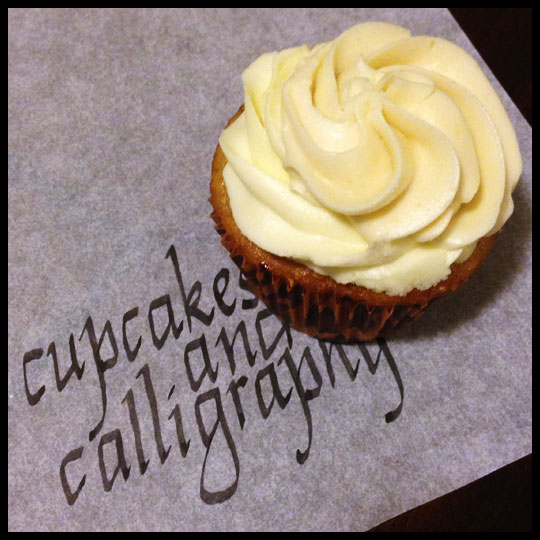 (Like my fun little graphic? Learning the basics to calligraphy was so much fun! The three of us have decided to join the local guild and continue learning new techniques and experimenting with different pens, inks, and paper. We are addicted.)

Butter Pecan isn’t a flavor that I come across often, so I was really hoping this would be a great cupcake. Plus, the service at the cupcake trailer was wonderful and you could tell that the baker invests a lot of love into her treats. Giving a bad review with such good service is never fun. I wish I could say that this cupcake was amazing, but really, it was just good. Not bad, but just okay. The overall flavor of the cupcake was a nice blend of sweet and buttery with really strong pecan flavor (they do get extra points for this, I love pecans!), however the cake was a little dry. 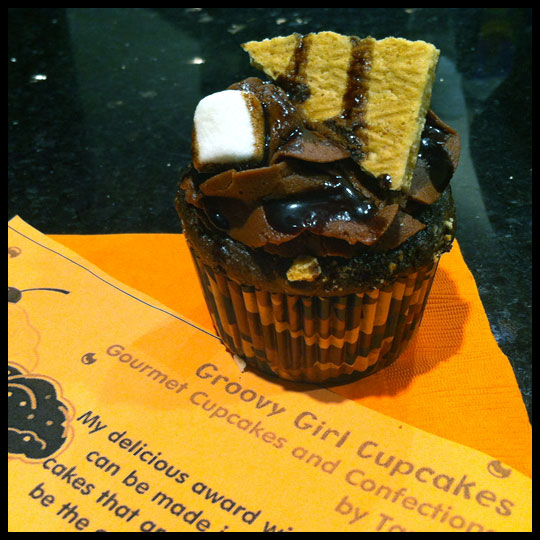 Jenn had similar thoughts on the S’mores cupcake. She told me that the chocolate cake had a graham cracker baked into the bottom and it was filled with a light marshmallow filling, “that was wonderful.” But like mine, the cake was a little dry around the outer edges, however she thought that the combined flavors were really good.

I wish I had taken a picture of the cupcake trailer, but it was dark and I was on a time crunch. If you get a chance, if for no other reason than to see their adorable trailer and experience their great customer service, you should definitely stop by and try a cupcake or two for yourself.