Attempting to capture the wonder of cupcakes into a tiny candy morsel, the makers of CookieDough Bites created Cupcake Bites and Red Velvet Cupcake Bites. I found each of these at our local dollar store and curiosity got the best of me.

The Red Velvet Cupcake Bites are definitely red on the outside. Unfortunately so much red on such a tiny bite leaves the the candy with that unmistakable red dye flavor. The inside of the candy, to my surprise, was not red, but cookie dough colored. After popping a few more in my mouth, I realized that the flavor was more like cookie dough than cupcakes. I suspect that the insides might be a very similar recipe to the original CookieDough Bites. 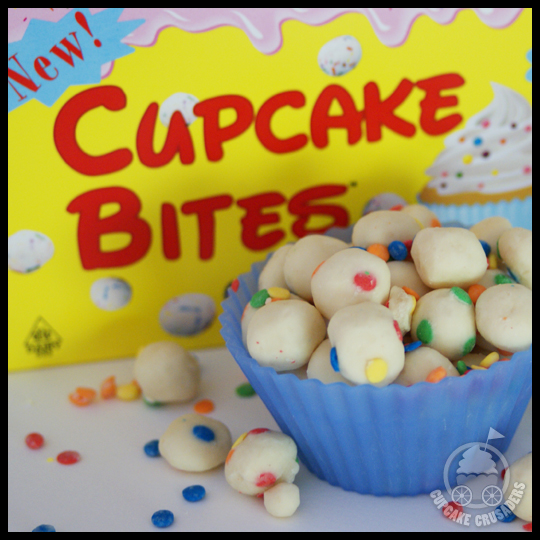 I had higher hopes for the regular Cupcake Bites. They were certainly fun, with their colorful sprinkles, with extra scattered in the bag like confetti. The soft candy coating on the outside tasted like white chocolate but the inside looked like the Red Velvet candies and tasted more like cookie dough.

Although these candies don’t necessarily live up to their name, they are festive and easy to indulge in. Not overly sweet, especially for a candy, they are easy to pop in your mouth one after another, without paying much attention to how many you’ve eaten. I think they’d be great dropped into a tub of buttery popcorn!

If you’d like to try them for yourself, head over to our contest page because we are giving away a box of each in our Two Year Anniversary Grand Prize Giveaway package, and you could be the winner! The contest ends tonight, Monday July 22nd, at midnight. Good luck!

Sticking with our cupcake flavored candy theme we started last week, today we are sharing a guest review from our blogging friend, Tiffany from Fizzy Party. Thanks Tiffany!

Memorial weekend I went to Long Beach, Washington with my parents. The weather was non-stop rain so on Saturday morning, while my dad went into town to check on his clients, mom and I stayed in the house reading. Dad came home with a bag full of salt water taffy. Can’t go to the beach without getting some taffy.

Now you may be asking yourself, why is she talking about taffy when this blog is about cupcakes? My sweet dad bought cupcake taffy just for me, because he knows I like cupcakes. Thanks dad!

The taffy reminded me of Funfetti cupcakes with its sprinkled flecks. As I twisted the ends of the taffy wrapper, a cakey smell wafted up to greet me.

The cupcake salt water taffy had a cake-flavored base with a sweet note at the end, reminding me of frosting. This taffy was a nice way to blend my love of the beach and cupcakes.

– Review by Guest Crusader, Tiffany from Fizzy Party (Visit her blog here. Currently she has a recipe review for Root Beer Cupcakes! Yum!)

Even though many of us are not able to gather with our family and friends to honor the brave individuals who lost their lives fighting for our country, there are still many ways to remember, reflect, and teach our children what today is all about. 🇺🇸
Perfect weekend for a beer and cupcake pairing from @1623brewing’s curbside pickup! 🧁🍺 You can order their Salted Rim beer with @clementspastry’s Salted Rim margarita cupcake. This is our first time trying Clements Pastry, and we were really pleased with this cupcake. The frosting is light and buttery, and the beer cake has an almost savory quality. Just the right level of sweetness and a perfect pairing with the margarita-style beer. Cheers to the weekend! 🍻
Graduation looks very different this year, but it’s still a reason to celebrate! 🎓 We have a couple of little preschool graduates, so wanted to make a special treat to celebrate. @bettycrocker Cookie Dough Bites, topped with homemade chocolate sprinkle surprise cups and a @ghirardelli square graduation hat! Congratulations to all the 2020 graduates! 🎉 . . . #classof2020 #graduate #graduation #diy #diyparty #graduation2020 #graduationcookies #seniors #seniors2020 #cupcakecrusaders
With Disney releasing their recipes, we could resist trying one for a virtual baking date with our friends and children. Making “the grey stuff” was so much fun! Add a @wiltoncakes rose decoration, and you have the perfect (and easy) Belle-themed party cupcake.
Weekends are for doughnuts! 🍩@enchantedcakesandtreats has DIY doughnut kits that are so much fun for the whole family. We’ve seen lots of businesses doing these kits, cupcakes and doughnuts too. We encourage you to see what’s in your area and #shoplocal.
We may be back to supporting our local sweet shops with curbside pickup, but that doesn’t mean we aren’t still having fun in the kitchen! Last weekend we threw together some quick cake pops using leftover frosting and cupcakes we had frozen. Are you baking (or just eating) anything sweet? Tag us so we can see!