We Crusaders want each cupcake we try to be great, sadly that isn’t always the case and sometimes we end up writing reviews that aren’t so sweet. Because we pride ourselves in being perfectly honest, good or bad, we will write about it. Every so often we hear back about changes that a baker or shop made after reading our review, with requests to try their cupcakes again. Well, we love eating cupcakes and are always up for giving a shop a second chance, so when CakeLove contacted us about giving them another try, we knew we had to go!

Crudsader Stacy was the first to try CakeLove about a year ago (read review), sadly it didn’t quite live up to her expectations. Kim LaMore, CakeLove’s Corporate Sales and Service Manager, saw our review this past February and contacted us about giving CakeLove another try. We were excited to hear that they made some changes after reading reviews from yelp, bloggers, and other social media outlets. (It is always nice when companies listen to their customers and take criticism in stride.)

After planning with Crusaders Jenn and Stacy, I set out to swing by CakeLove after the DC Rock & Roll 1/2 Marathon in March. When I got to the shop I was greeted by very friendly staff and choose 6 cupcakes to bring back to Baltimore. The Crusaders and I made plans to spend the next day together and try them in true “cupcake buffet” form. 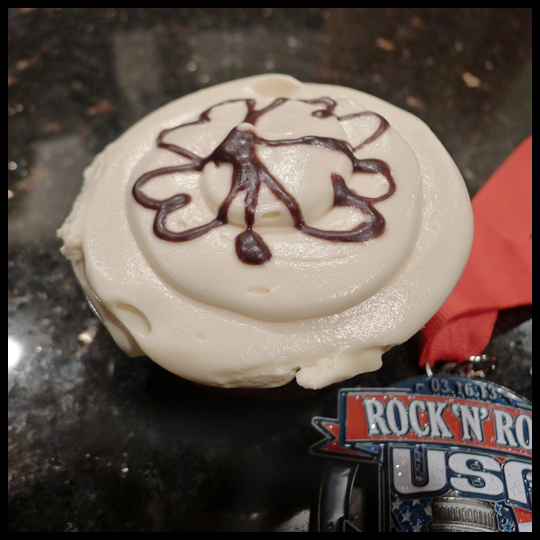 Who wouldn’t want some Bailey’s and chocolate cake the day after running a 1/2 Marathon, oh, and on St. Patrick’s day! While we thought the chocolate cake was just ok, the frosting really stood out and packed a punch of Bailey’s flavor. When eaten together the cake and frosting combination was a win.

All three of the Crusaders love coffee, so this flavor was a must when I made my selections, and this cupcake did not disappoint. While we agreed that the cake by itself was nothing extraordinary, the frosting was amazing and we could have eaten a tub of it. The cake in this instance was merely a vessel for the fantastic frosting.

As always, Red Velvet vexes me and my cupcake crusade. It wasn’t bad, it just wasn’t a stand out in this bunch. The frosting was very smooth and a bit sweet, with an interestingly different flavor to it, perhaps mascarpone and a bit of butter? I wouldn’t mind having more of that frosting, but am not sure I want it on their Red Velvet cupcake.

Lovely swirls of caramel and salt crystals adorn the delicious frosting of this cupcake, sadly the cake underneath was a bit dry and crumbly. I personally loved the frosting, it was smooth, very buttery (my favorite), and Crusader Stacy agreed that it had great salted caramel flavor. Crusader Jenn thought the frosting didn’t balance the sweet and salty, so this wasn’t her favorite frosting or cupcake. 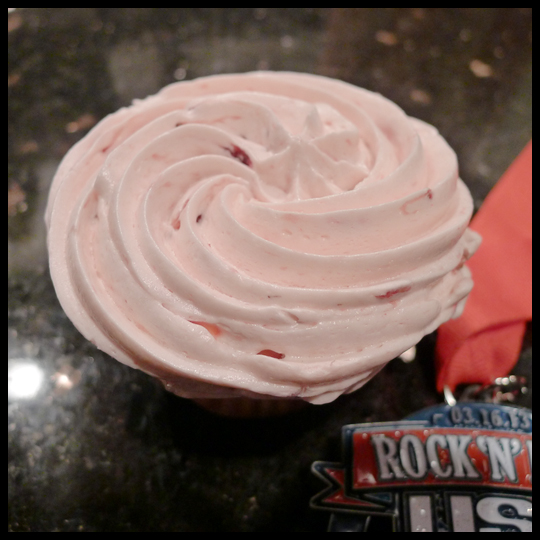 This cupcake reminded me more of Strawberry Shortcake than a cupcake. The cake was a dry and crumbly, like that of the Salted Caramel, and even though the frosting was smooth and had great flavor, it couldn’t save this cupcake from being just “ok.”

Sweeter than the rest, I was glad I saved this chocolate explosion for last! Rich and chocolatey, Crusader Stacy wished she had a glass of milk to drink with it. The shavings on top added a nice texture. And while super sweet isn’t always my style, this is a cupcake I would eat again and again.

CakeLove obviously made some fantastic changes to their recipes and we enjoyed their re-vamped cupcakes. We cannot thank them enough for reaching out to us! Not only did it give me a reason to eat cupcakes after running 13.1 miles, but it also gave us a fresh perspective on this very accomplished bakery. (And an added bonus for our readers: Kim sent along some interview questions to Warren Brown himself! Watch for that interview tomorrow.)

MAS Rescue (Maryland Animal Sanctuary Rescue) is a volunteer and foster-based animal rescue that is very special to me because my husband, Ken, and I adopted our wonderful puppy (now almost two years old) from them. We can’t thank them enough for caring so much about her before she found her forever home with us. On the first Tuesday of every month they host an event called “Yappy Hour” where people can meet some of the dogs looking for new homes and purchase wine and/or beer to support MAS Rescue (a dollar of each sale goes directly to the rescue). Last week, in addition to beer and wine, they were selling Guinness and Baileys cupcakes donated by Honey Bee Delights.

This flavor was very appropriate since St. Patty’s Day is right around the corner. Once I heard that this month’s Yappy Hour would have cupcakes, I knew I would be stopping by after work to try one and support my favorite rescue. The cupcake was made with a Guinness chocolate cake base, Baileys Irish Cream frosting, and topped with green sugar sprinkles. They were being sold for $2 each and a hundred percent of every sale was going towards the rescue.

If I’m being honest, this wasn’t my favorite Guinness and Baileys cupcake, but the standards have been set pretty high. The cake had a nice stout flavor and was light and fluffy, but was a bit dry. The frosting seemed to have a cream cheese base and I was having trouble tasting any Irish cream in it.

Even though it wasn’t my favorite, I was happy to support MAS Rescue and try cupcakes from a new baker at the same time. I would definitely go to the next Yappy Hour for a drink and to buy more cupcakes from Honey Bee Delight, knowing that it’s going towards a great cause.

If you want to learn more about MAS Rescue and Yappy Hour, please visit their website or Facebook page.

What could possibly make St. Patrick’s Day any better when you already get to wear green, act a bit crazy, drink lots of beer, and eat your weight in corned beef, cabbage and potatoes? You guessed it! Cupcakes!

Local bakeries and cupcakeries seemed to have a ton of fun this year with St. Patty’s Day offering everything from Chocolate Mint, Green Velvet, Irish Cream, Guinness, and even Corned Beef and Cabbage cupcakes. Below is a sampling of some that the Crusaders were fortunate to try!

This cupcake screamed “GUINNESS” and “BAILEYS!” The cake was moist and rich, and the frosting was not sweet, but instead, it was buttery and very booze-infused. I’ve had several cupcakes from Hamilton Bakery, and this is my favorite so far!

Kupcake & Co. paired their amazing chocolate cake with a sweet and smooth Irish Cream frosting. The frosting was so flavorful that there’s no need to sit down with an after dinner Baileys on the rocks when you have this cupcake.

Crusader Jenn said that while the green cake on this Starry Night cupcake was really fun and festive, unfortunately it didn’t have much flavor that she could pinpoint. But her exact words about the frosting: “The chocolate ganache…oh the ganache! So good!” I’d say that she enjoyed it.  😉

Some may argue that this is not a real cupcake due to its savory nature, but as always Starry Night stepped outside of the box and offered up something different. This Smithwicks cupcake was topped with corned beef in a Guinness glaze and finished with whipped potatoes & cabbage. Crusader Jenn said that it was the perfect pre-dinner appetizer!

We hope that you were able to enjoy some fun green-themed cupcakes this St. Patty’s Day! If so, share them with us!

Named after the common cookie, I wasn’t sure what to expect from Snickerdoodles Bakery and Coffeehouse (Hampstead, MD). Would it just be a take-out bakery that you stop in on your way to work for a quick cup of coffee and a muffin? When I finally went to their shop, I was surprised and pleased to find a sophisticated bakery and high-end coffeehouse, with plenty of room to bring friends and gather around one of their many tables, or just to come yourself and relax in their cozy surroundings. The mom in me loved seeing that they even have a miniature table with chairs, inviting guests to bring their kids with them. 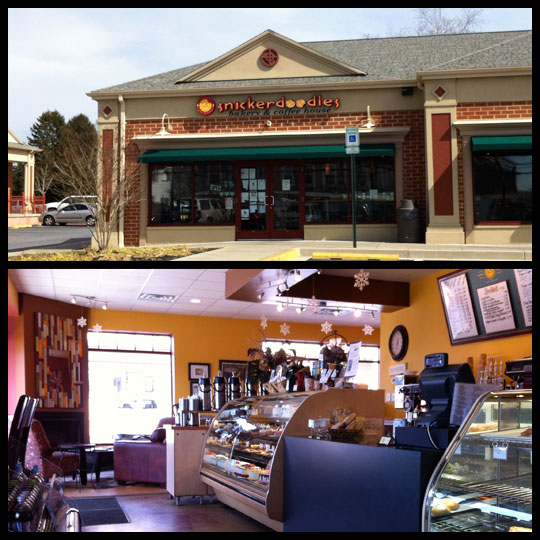 After taking in the great atmosphere, I began investigating the goodies. My first thought? “WOW! Those cupcakes are HUGE!” My second thought? “How much are they?” With their size and the decoration and toppings on most of the cupcakes, I thought they would be pricey. However, they aren’t! At $3.00-4.00 for the large cupcakes, they are very reasonably priced. And the best part is that they are large enough to share (or to have more than one helping for yourself)!

On this day I was fortunate enough to leave with one of each flavor in the shop, making 12 cupcakes in total. Due to the grandness of these cupcakes, and the number we have to show you, we’ve decided to break our review into two parts, featuring 6 of the cupcakes in each post. Here are the first ones we’ve selected to show you:

Irish Car Bomb:
During the St. Patrick’s Day season, we see a lot of these cupcakes based on the popular drink (Guinness and Bailey’s Irish Cream) pop up. I’ve had a few takes on the idea, and this one is a clear stand out for me!

I usually see these cupcakes done with a chocolate cake, however Snickerdoodles has choosen to make this a true Guinness stout cake. None of the smooth Guinness flavor is lost and, just like an Irish Car Bomb, the Bailey’s Irish Cream filling and frosting complement the cake perfectly. It is so moist and flavorful!

Cannoli:
I think the best way to describe this next cupcake is with a photo.

Yes, ladies and gentlemen, that IS a whole (mini) cannoli on top! This cupcake has a chocolate chip cake that is moist and delicious, with a cannoli filling that I think even the toughest critic would appreciate, and is topped with a chocolate ganache frosting, American buttercream, and more chocolate chips.

Almond Raspberry:
For the Crusaders, this has become a classic combination. We love the pairing of almond and raspberry. 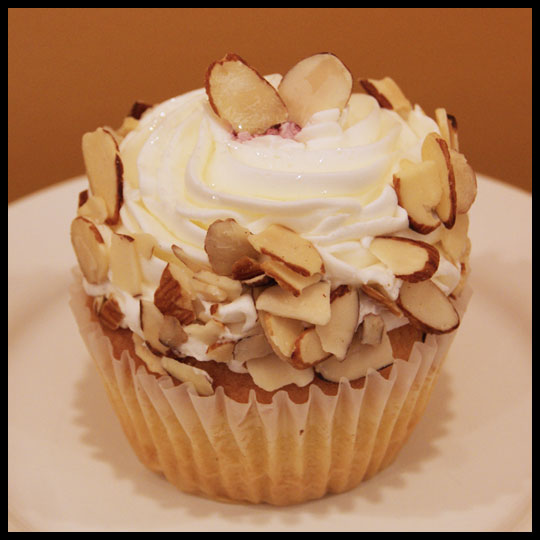 Red Velvet:
This Red Velvet cupcake has been taken to the next level.

I was really happy with the moistness of the cake! I’m always disappointed with red velvet cake, however this one is not only moist, but also has a great flavor. It’s paired with a cream cheese filling, American buttercream frosting, and topped with a chocolate shaving and toasted red velvet cake crumbs. The frosting makes this cupcake really sweet, but I enjoyed every bite!

Toasted Coconut:
This is another classic flavor. With the decoration, this cupcake needs no label. 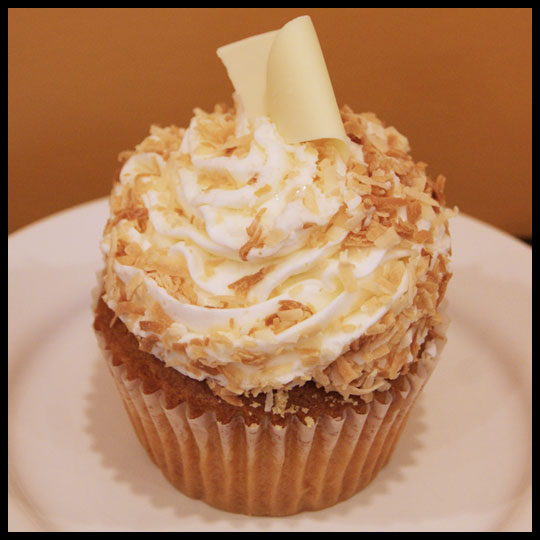 All together the cupcake works, however it isn’t as “coconut-y” as I prefer. That being said, the moist poundcake-like cake, whipped filling, buttercream frosting, and generous toasted coconut shavings on top are still really tasty!

I think it’s necessary to also show a photo of the inside of this cupcake, to really get a good idea. 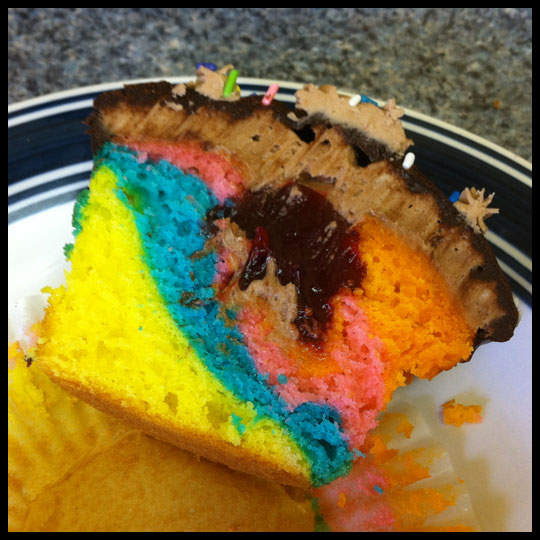 If you have a chance to visit Snickerdoodles, please do! Whether you are looking for a special treat, a great beverage, or a place to just hang out, Snickerdoodles has it all! They also have beautiful full-size cakes, pastries, and cookies. I can’t wait to return! And, keep a look-out for Part 2 where we’ll be reviewing Strawberry White Chocolate, Carrot Cake, Boston Cream, Black Bottom, a fun, fancy, party cupcake and Death by Chocolate!