I’m not usually a big fan of Black Forest cake. I like fresh cherries, but can’t seem to get into anything else that has cherries in it, or a cherry flavor. That was until Guest Crusader Beth, from Sweetness Follows, gave me a jar of her Bourbon Cherry Jam. As soon as I tried it, I knew I wanted to use it in a cupcake (you may remember we used her Raspberry Chambord Jam in Chocolate Raspberry Chambord cupcakes).

(Sweetness Follows jams are available on Etsy in seasonal flavors.)

I had un-frosted chocolate cupcakes in my freezer, waiting to be turned into something good. After thawing, I filled them with the delicious jam. Since I didn’t have to bake or cook anything, the first two steps made these the easiest cupcakes I’ve ever made. 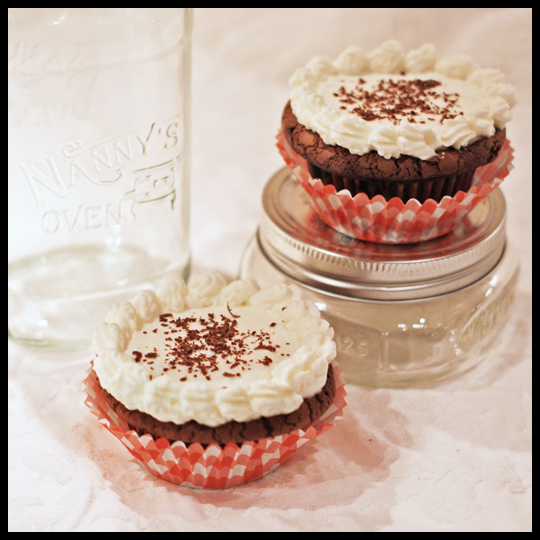 The first two steps being so simple, I decided that I needed to do something to challenge myself…this is called a “Baking Adventure” after all. So, instead of picking up a tub of Cool Whip or can of whipped topping, I decided to make my own.

I’ll be honest, I was scared. I watch Food Network, I know making whipped cream can make or break a dessert (I’ve seen it happen on Chopped). The cream may never set properly or you can over whip it. There’s such a fine balance to making it successful.

Well my fear was for nothing, because my whipped topping was PERFECT. I found a recipe on AllRecipes.com for Black Forest Cake, which included the frosting. I only made a half batch, so I used 1 1/2 cups of heavy whipping cream, but instead of the small amount of confectioner’s sugar, I slowly added in about 1/2 cup so that it would be stiffer (hoping I wouldn’t mess it up!). The recipe didn’t tell me how long to whip it with an mixer, only to do it until it formed stiff peaks. I opted to pull out my hand mixer, thinking that I might over whip it with my standing mixer.

In the end I was really please with how the frosting piped, yet was still super airy (just like what you’d expect from the aerosol can stuff). The cupcakes were pretty good and not overly sweet, thanks to the liquor infused jam and light frosting. What I really loved was how simple they were and I learned not to be afraid of making my own whipped cream! I need to get my hands on more Sweetness Follows jams, since they are so good in cupcakes!