We met Lamorea, of That’s So Morie Cupcakes, at our first Cupcake Picnic in Washington DC. She came fully prepared with many summer flavors, each wrapped up individually and ready to take home to enjoy after recovering from an intense cupcake coma. Since then, we tried several times to meet up again to indulge in cupcake goodness, but for one reason or another it never worked out, until recently.

She graciously gave us a dozen cupcakes to sample in a variety of flavors: The Usual (Vanilla), Strawberry Cheesecake, Naptown (Coconut Almond—named after our mutual hometown, Annapolis), and Caramel Butter-Pecan Chocolate Deluxe.

It just happened to be my mom’s birthday the same day I picked up cupcakes from Lamorea, so after delivering one of each flavor to Crusader Elisa’s house, there were eight left for my family to all enjoy together (with the disclaimer that Crusader Jenn and I each had to have at least one bite of every flavor). 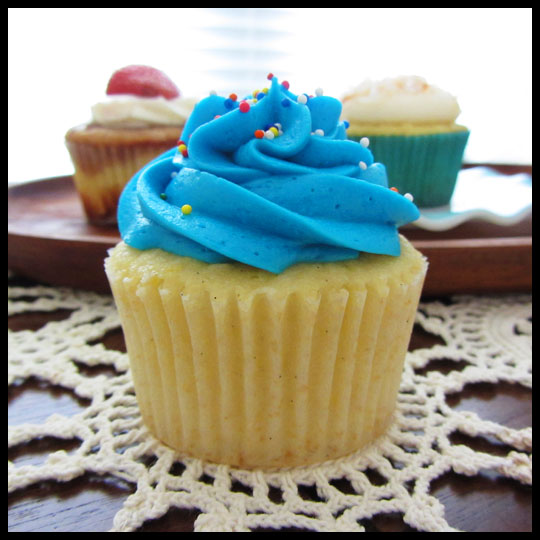 I knew, on looks alone, this vanilla cupcake would be the favorite of my nieces (ages three and under). They were all instantly drawn to the vibrant blue frosting and happily split one cupcake among the three of them. This classic cupcake almost had a sugar cookie like quality to it. The frosting wasn’t overly sweet and it reminded us of those frosted sugar cookies you find at the store (which we actually really love). Typically I would prefer a vanilla cupcake to have more vanilla flavor, but because it was reminiscent of a sugar cookie, it didn’t bother me at all. 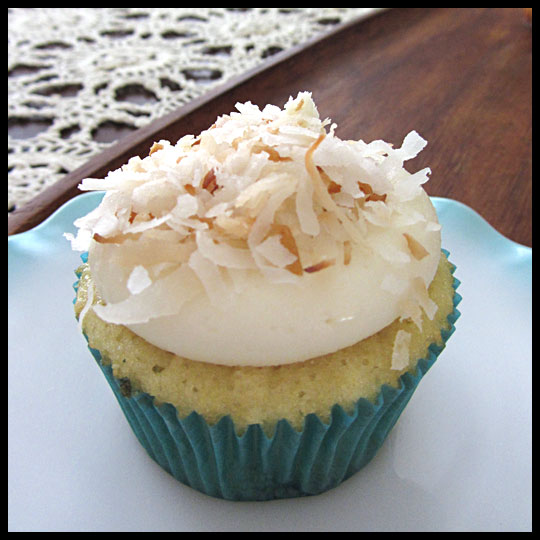 This cupcake starts with an almond cake, is topped with Lamorea’s savory cream cheese frosting and is then dipped in toasted coconut. When done right, almond cake is one of my favorites and the combination of flavors in this cupcake work much better than I thought they would. In fact, this was both Jenn’s and my favorite. 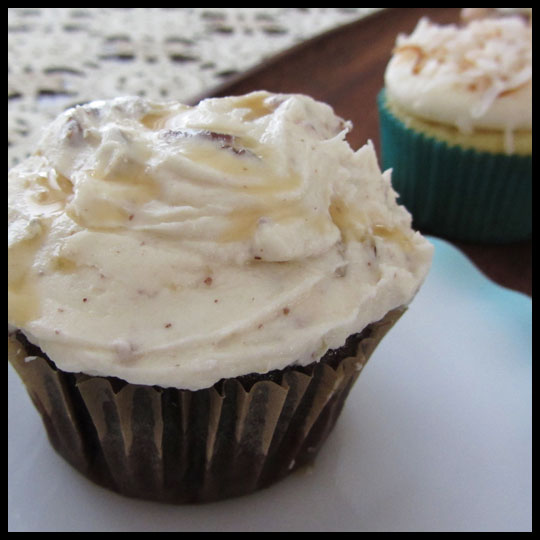 When Lamorea told me about this cupcake I was immediately intrigued. I like butter-pecan, I like chocolate, I like caramel, but how would they all taste together? Well, as it turns out, they work really well. Of all the cupcakes, this one was the sweetest of the bunch, which we think was due to the caramel drizzle. I’m not sure if it would be too much, but I LOVE salted caramel and wonder if it would work on this cupcake, or just add too many flavors? 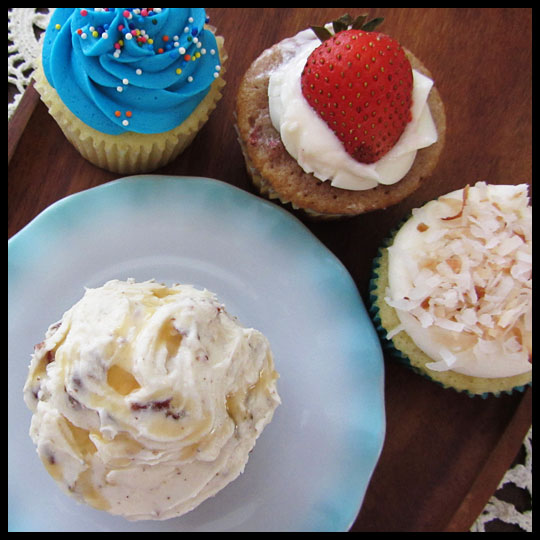 Going into this cupcake tasting, I already knew I would love these cupcakes, since we tried several other flavors at the cupcake picnic, but it was nice to try Lamorea’s creations without being somewhat overdosed on cake and frosting.

That’s So Morie Cupcakes will be offering Treat Yourself Fridays starting in late November.  She’ll be testing this out by posting select cupcake flavors every other Tuesday to be picked up as a six pack that following Friday. Also, according to her Facebook page, she’ll be coming to Odenton, MD soon (currently located in Millersville, MD) and will be selling her cupcakes and cake pops individually. We are very excited for Lamorea and her growing business! For more information on That’s So Morie Cupcakes, visit their website or Facebook page (trust me, you won’t be disappointed!).

It’s always nice to get a cupcake break during the middle of the week, especially if it just happens to be on a gorgeous spring afternoon! Recently, I was out and about for a work errand when I found myself in the Federal Hill area. For me, this means one thing: Midnite Confection’s. Luckily my work related outing overlapped with my lunch break, so I happily found myself parked in front of Midnite Confection’s adorable little shop just minutes after they opened.

While we haven’t written much about Midnite Confection’s on our blog, we’ve eaten tons of their cupcakes and even listed them in our Top 5 cupcakeries inside Baltimore City during our guest series on KimberlyLoc.com. There is one cupcake flavor that they carry from time to time I’ve been longing to try… Sinnabon. It is currently their flavor of the month, so I walked in with full expectations of finally conquering this flavor.  Unfortunately, I was a little too early and the cupcake was still too warm to frost. I didn’t have time to wait, so instead I chose their flavor of the week, Butter Pecan.

The two gentlemen working that day informed me that the Butter Pecan was still warm, since it had just cooled enough to frost, and that if possible, I should eat it right away. I hadn’t eaten lunch yet though, so I wasn’t sure if that would be the best idea. Well, it only took about three seconds for me to change my mind. Sitting in my car, I waited just long enough to take a quick photo before devouring the warm buttery goodness.

My first bite was like a little piece of heaven. The warm moist cake was full of pecan flavor and had a slight crunch on the top which added a great texture. I’m now convinced that everyone should head to Midnite Confection’s when they first open and ask what cupcakes are warm and fresh from the oven. It just might be the best way to eat a cupcake.

In all my cupcake eating experience, this was a first for me. I hope to repeat it one day soon… There’s a week left in May, which means I still have time to attempt finally to try the Sinnabon cupcake. I can only imagine how amazing that will be warm.

Over the past month the Crusaders have been working hard to prepare for another series which was supposed to be featured on another blog. Unfortunately, this fell through, so instead, we will be featuring this series on our own blog next month. This series will highlight our Top 5 favorite places outside of Baltimore City (but still within a short driving distance). This means we have eaten A LOT of cupcakes. So, for February, we decided to share some of the new spots we’ve visit, but you’ll have to wait until March to see our final Top 5 picks. 🙂

One of the places we visited for the first time was Cooks ‘N Cakes located off the Baltimore National Pike in Ellicott City, MD. This new cupcake spot opened their doors in December 2011. Their tagline, “Home of the Two-Touch Cupcake” means that they have made a commitment that no more than two hands will create a cupcake from batter to frosting. They believe that this allows them to make each cupcake spectacular and not just “a dime a dozen” like some critiques believe. 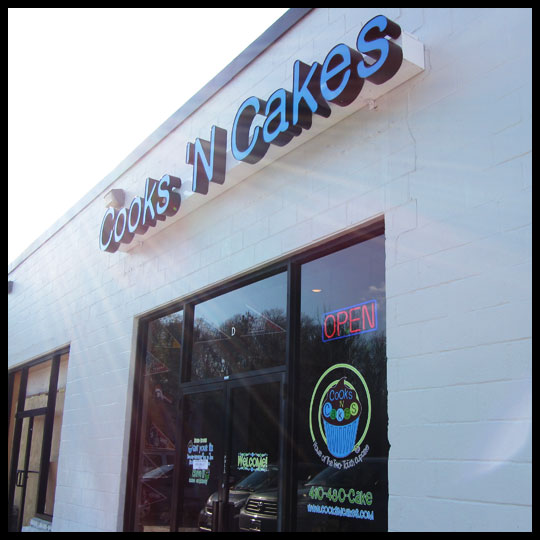 After seeing all their posts on Facebook, we couldn’t wait to test this latest addition to Maryland’s cupcakeries, so Crusader Elisa and I finally made it there about a month after their grand opening.

We were visiting a couple other places that day (cupcake research is a tough job…), so we limited our selection to 4 cupcakes: Butter Me Up, Childhood Friend, Spiked Punch, and Coffee Craze. They placed the cupcakes in an upside down cup, which is a recent packaging idea that I’ve seen and LOVE. The cupcakes don’t move around and they arrive at your destination with the frosting and decorations still in place. 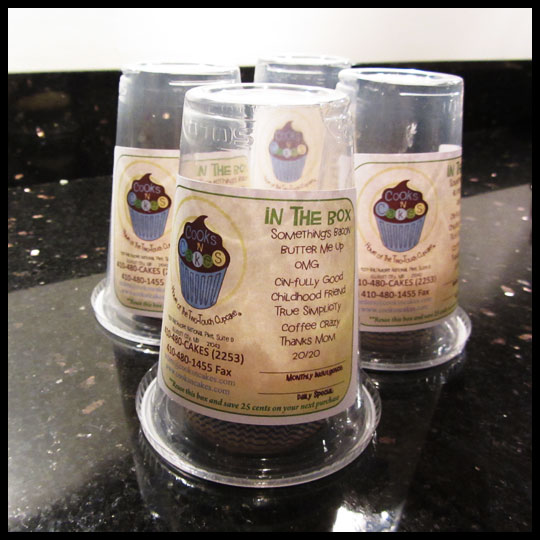 Elisa and I took our cupcakes over to Crusader Jenn’s house later that night. We also had cupcakes from other locations that we stopped at earlier that day, so we were happy to have help eating them all!

We started with the cupcakes from Cooks ‘N Cakes. Here are our thoughts:

Butter Me Up:
(Vanilla Butter Cake with Butterscotch Buttercream and Chopped Pecans)

The cake on this cupcake was very dense, similar to a pound cake in texture and flavor. The sweet butterscotch frosting worked really well with this mild cake and overall the flavor was nice, nutty and sweet. The one thing about this cupcake that is worth mentioning though, is the unevenness of the cake and frosting (as you can see in the picture above). It wouldn’t have been a big deal, except we were cutting it into several pieces and some taste testers didn’t get as much of the delicious frosting.

Unfortunately, I think I was the only one who liked this flavor. The others thought it left behind a strange aftertaste that made this a cupcake they would not get again. I’m not sure how I didn’t notice it, but I actually enjoyed this cupcake. The frosting was smooth and sweet and PB&J cupcakes tend to be a favorite of mine.

The first thing I want to mention is that the cake on this cupcake was very short, like it didn’t rise while baking. Also, from the description it didn’t seem to be a devil’s food cake to us. I’m not sure if they were trying something different that day, but the cake wasn’t very chocolaty and it actually had a burnt coffee taste to it. The aroma of this cupcake was amazing though, and the frosting was equal to that. I also didn’t taste any hints of cinnamon in the frosting and I’m wondering if the coffee flavor in the frosting overpowered everything? The upside of this was that when eating the cake and the frosting together, the burnt coffee taste in the cake was eliminated. Two of the four of us would have gotten this cupcake again, even if it didn’t seem to match its description. 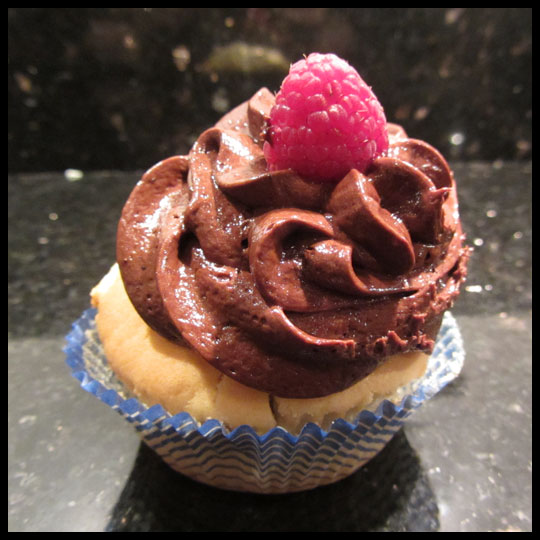 This last one was definitely the overall crowd pleaser. The chocolate frosting was considered perfect by everyone and the raspberry filling was amazing. (Like, unbelievably amazing.) We really can’t say enough good things about this cupcake!

All in all, I would definitely visit this cupcakery again. They have so many flavor options and while we were there, they had samples left out to try. Elisa and I each thought the vanilla buttercream from one of the samples was amazing and the chocolate cake from another sample was very moist and light. Next time, we would definitely like to try some full-size cupcakes including those flavors.