Two stops into our roadtrip tour we Crusaders felt like we won the cupcake jackpot! Great cupcakes, cool shops, and even a little brewery break set the bar pretty high for our last stop, Cupcake Heaven in Wilmington, DE. (you can read those first two reviews here and here).

Following the GPS to the shopping center, things started to look oddly familiar. As we parked, I knew this was not my first time at this cupcake shop. A friend lives near Wilmington and we stopped by Cupcake Heaven during one of my visits. Honestly, I was hoping this experience would be better than my first… so we walked in and I wiped the opinion slate clean. 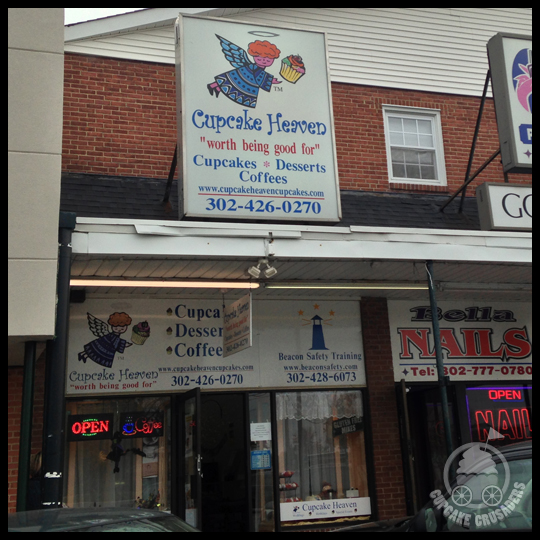 Cupcake Heaven had a variety of cupcakes to choose from. The staff was helpful, but didn’t seem enthused to be working. After making some difficult choices, we sat to try our flavors.

Stacy’s Cinnamon Apple cupcake looked pretty appetizing, but was a complete disappointment. The cake was incredibly dry and the frosting was “blah.” The only redeeming quality of this cupcake was the filling, unfortunately there was very little of it, making for an overall sad cupcake experience.

Jenn was weary of her cupcake after seeing Stacy’s reaction… but as a true Crusader would, she trekked on and tried the Mint Chocolate Chip cupcake. The chocolate cake was very dry. And the frosting, while oddly bright, was surprisingly smooth and had great mint flavor. The best thing about this cupcake was how much Leah loved the frosting.

My sweet potato cupcake looked fantastic, but tasted like cinnamon cardboard. The frosting was too sweet and didn’t have much flavor, while the cake was a crumbly mess. After years of eating cupcakes all over the spectrum from good to bad, this one sticks out as one of the worst. Confirming that my first experience wasn’t a fluke.

The best part of this cupcake stop, minus the company, was Stacy’s Peanut Butter Cake Truffle. The chocolate cake had great peanut flavor mixed in and the truffle texture was smooth. It might have been the only thing that made us glad we stopped by Cupcake Heaven. Well….That and Leah’s face covered in frosting:

(No one can deny that adorable face!)

It was such a shame to have our last stop be such a disappointment. Cupcake Heaven was more like Cupcake Purgatory… there wasn’t fire and brimstone, but it certainly wasn’t Heaven. Sadly, after our experience there, I think Jenn and Stacy’s dad, Mr. Ross, said it best: “Go get some tasty cakes instead.”

Overall, our cupcake roadtrip tour was a HUGE success! We enjoyed our stops along the way and while not everything was perfect, spending a whole day together is always a great time!

Healthy Guest Crusader Rebecca trekked cupcakes for me all the way from Arizona, and managed to stop by more than one cupcake location. My previous review about Sweet Things Cupcake Shoppe in Tucson went very well, so I was hoping that the cupcakes and cake truffle pops from Caketini in Gilbert AZ, would be just as delicious.

There were two HUGE cupcakes and six cake truffle pops for me to sample:

Almost too pretty to eat, this cupcake was simply beautiful, and tasted great too. The cake was airy with a classic vanilla flavor. The frosting was light, smooth and not very sweet. It also seemed to be whipped and it was very buttery, which is right up my alley. The carefully drizzled caramel and cracked salt crystals on top added flavor and texture that took this cupcake over the top. Definitely a cupcake I would eat again, and even one I would trek back from Arizona!

Funfetti cake with vanilla buttercream and sprinkles on top = an Elisa kinda cupcake! Most of my friends know about my love of funfetti, Crusader Stacy even made me funfetti cupcakes for my 30th birthday, so I was dying to try this cupcake. Like the Salted Caramel, the cake was moist and light, but very flavorful and FULL of funfetti specks throughout. The vanilla buttercream frosting was smooth and sweet, pairing well with the cake. The edible glitter and sprinkles on top certainly didn’t hurt my affection for this cupcake; it looked like a party and tasted like one too.

WOW – Aren’t these so pretty all lined up? Maybe cake pops/cake truffle pops should always be sold in half dozens. lol. 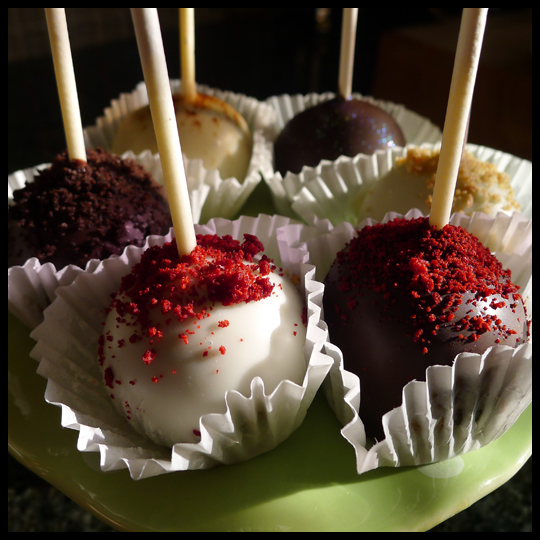 The shop staff recommended that the truffles be refrigerated and then eaten, as they prefer people to be able to crunch into the chocolate coating, so that’s just what I did. Each truffle was better than the next. All were moist and full of flavor, all had fantastic texture, and all were devoured in a day. (My goal had been to eat 3 and save 3 for the next day, but they were too good to stop eating!) My two favorites were the Red Velvet with White Chocolate and Chocolate Strawberry. While these two stood out, I would be more than happy to eat any of them again. By far some of the BEST cake truffles I have ever had the pleasure of eating.

If all of Arizona’s cupcakes are as good as the cupcakes I tried from Sweet Things Cupcake Shoppe and Caketini, that Arizona is one lucky state! There wasn’t one bad cupcake or cake truffle in the bunch, and that’s very impressive considering they passed through two time zones on a plane and were already a day old. A special thanks to Healthy Guest Crusader Rebecca (and her fiance Jim) for trekking these treats back for me – if this is the kind of payment I get for watching their new puppy Shelby, then count me in!