A couple weeks ago I was tasked with baking cupcakes at home, with only a few days notice, for the Baltimore Eats Food Bloggers’ Happy Hour. Initially I thought I would buy cupcakes and bring them, but after discovering that Tiffany, from Baltimore Eats, was going to make her cupcakes I thought, “I can do that too!” (and save some money in the process…).

With only a few days until the event I decided I was going to use what I had on hand instead of making an unnecessary trip to the grocery store. The only cake mix I had was something I picked up on a whim at a dollar store a month or so ago.

I had never seen Mrs. Fields cake mix, so I was instantly intrigued and figured I’d use it eventually, and I was right. I also had a handy can of pre-made chocolate frosting that I had picked up during a sale at the grocery store at some point. Normally after finding those two items one would think I was all set to go, but I’m a Cupcake Crusader, I can’t bring cupcakes that are from a box and tub to a happy hour that would be filled with food bloggers! So, I continued looking for inspiration and came across some Dove Dark Chocolate Raspberry candies and a recent gift of Raspberry Chambord Jam from my friend and Guest Crusader, Beth Lacey (AKA: Jam Making Goddess for Sweetness Follows and all around awesome person).

I knew that the jam would blow everyone away and really take these simple cupcakes to the next level, but I wasn’t quite convinced that the canned pre-made frosting was going to go over quite as well. I also knew it would not hold up to being piped out on top of the cupcakes, so I turned to Google to help me modify that and make it better. Luckily I came across this article from Bukisa.com. It said to make canned frosting taste a little more homemade, and to make it stretch even further, just add some powdered sugar to it. For the chocolate frosting it also mentioned adding in some cocoa powder if you wanted to keep it tasting rich and dark. After reading this, I got super excited becuase I realized I had the perfect thing waiting to be used: 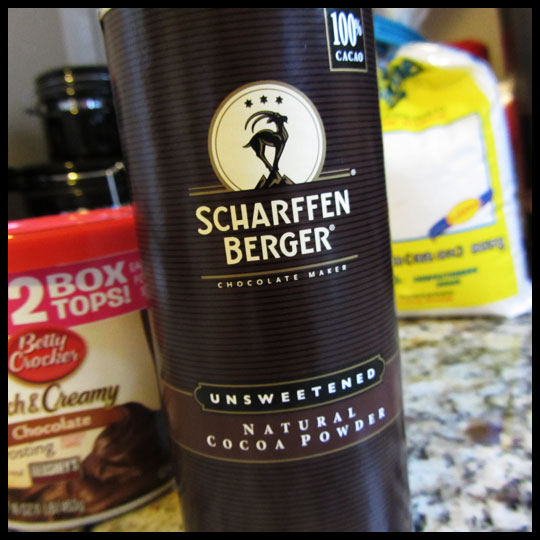 After our bake sale for No Kid Hungry, I received a huge package of goodies from Scharffen Berger which Jackie from La Casa de Sweets had set up as a thank you gift for the teammate that raise the most money (other than herself). Now I finally had a reason to use it.

As always, I added a box of instant pudding to my cake mix and threw in a bunch of semi sweet chocolate chips for extra measure, then baked the cupcakes as directed. I followed the instructions from Bukisa.com for the frosting and was really happy with the results. Once the cupcakes cooled, I carved out the center with a grapefruit knife (after I did this my husband gave me my new cake plunger gadget which I still haven’t used) and then filled the cupcakes with Beth’s amazing Raspberry Chambord Jam. After adding a swirl of chocolate frosting in my favorite rose-like fashion, I topped each cupcake with half of a Dove Dark Chocolate candy. I may or may not have eaten some of the candies sans cupcakes too…

(I think I should make this my life’s motto…)

The final results? Dark, rich, tart delightfulness. These cupcakes that were thought up in a pinch might be some of the best cupcakes EVER (well, at least the best cupcakes I’ve ever made). Of course I have to give all the credit to Ms. Beth Lacey because her jam really paired perfectly with the luscious chocolate. It’s amazing what you can create with ingredients you have sitting on the shelves.

Even though many of us are not able to gather with our family and friends to honor the brave individuals who lost their lives fighting for our country, there are still many ways to remember, reflect, and teach our children what today is all about. 🇺🇸
Perfect weekend for a beer and cupcake pairing from @1623brewing’s curbside pickup! 🧁🍺 You can order their Salted Rim beer with @clementspastry’s Salted Rim margarita cupcake. This is our first time trying Clements Pastry, and we were really pleased with this cupcake. The frosting is light and buttery, and the beer cake has an almost savory quality. Just the right level of sweetness and a perfect pairing with the margarita-style beer. Cheers to the weekend! 🍻
Graduation looks very different this year, but it’s still a reason to celebrate! 🎓 We have a couple of little preschool graduates, so wanted to make a special treat to celebrate. @bettycrocker Cookie Dough Bites, topped with homemade chocolate sprinkle surprise cups and a @ghirardelli square graduation hat! Congratulations to all the 2020 graduates! 🎉 . . . #classof2020 #graduate #graduation #diy #diyparty #graduation2020 #graduationcookies #seniors #seniors2020 #cupcakecrusaders
With Disney releasing their recipes, we could resist trying one for a virtual baking date with our friends and children. Making “the grey stuff” was so much fun! Add a @wiltoncakes rose decoration, and you have the perfect (and easy) Belle-themed party cupcake.
Weekends are for doughnuts! 🍩@enchantedcakesandtreats has DIY doughnut kits that are so much fun for the whole family. We’ve seen lots of businesses doing these kits, cupcakes and doughnuts too. We encourage you to see what’s in your area and #shoplocal.
We may be back to supporting our local sweet shops with curbside pickup, but that doesn’t mean we aren’t still having fun in the kitchen! Last weekend we threw together some quick cake pops using leftover frosting and cupcakes we had frozen. Are you baking (or just eating) anything sweet? Tag us so we can see!