“Every year the women of New York leave the past behind and look forward to the future…this is known as Fashion Week.”
~Carrie Bradshaw, Sex and the City

Something you may not know about me is that I am not the only talented (and modest) designer in the family. Of course there’s my twin, Crusader Stacy, but while she and I stick with graphic arts, my brother-in-law is a very talented fashion designer. The gene for visual art skipped my husband and went straight to his younger brother, David. David has been producing his own line of men’s accessories, called David Hart & Co., and has been doing very well with it, but this year was his time to really shine, presenting his first full line of menswear at Mercedes-Benz Fashion Week in New York. 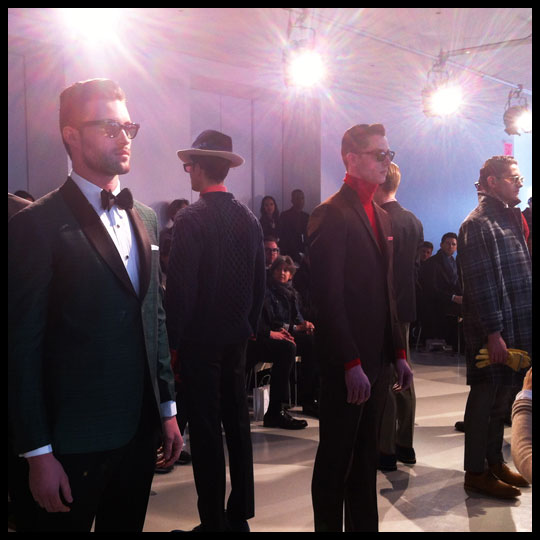 I was honored to be invited to the presentation and very excited about having a reason to spend the day in NYC. Unlike what Carrie Bradshaw would do, I took the bus to the city, made my way around via the subway, and loved every minute of it! The best part of taking the subway was that I could stop at one of my favorite NYC bakeries, Little Cupcake Bakeshop, for a cupcake on my way to the New Museum, where David’s fashion show would be. Even better, was that I was able to meet up with my good friend and Guest Crusader, Jen!

(Quick photo-op with Guest Crusader Jen after our cupcake date.)

Having first tried Little Cupcake Bakeshop on a spur-of-the-moment cupcake crawl last fall, I knew that I could go in and get a great cupcake and warm cappuccino, which I was in desperate need of. While it was difficult, I was good and just ordered one cupcake: the Dreaming Princess.

This cupcake has an almond cake with raspberry jam spread on top, then covered in almond buttercream and topped with meringue frosting and toasted almonds. Jen and I both agreed that it was amazing. Perfect balance of flavors and sweetness with moist cake and a wonderful meringue.

Jen selected one cupcake to eat there, the Brooklyn Blackout, and took two home, the Peanut Butter and Jelly (which I assured her was one of Crusader Stacy’s favorites) and the Vanilla.

The Brooklyn Blackout was chocolate, chocolate, and more chocolate which they spruced up for Valentine’s Day with some heart shaped sprinkles. Jen allowed me to have a bite and wow! It had so much chocolate flavor without being overly sweet. Just thinking about it makes me want one right now (and I just ate a cupcake…hey, you can’t write about cupcakes and not get hungry!).

Unfortunately Jen thought the Vanilla cupcake was just, “Eh,” and kind of boring. I guess they can’t all be winners. I’d be curious to get Stacy’s take on it since she’s becoming somewhat of a vanilla cupcake connoisseur.

Although it was a quick day trip, it was great to spend time with family and friends, eat some cupcakes, and have some new experiences. David’s presentation was my first fashion show, and while I’m far from being a fashionista, it was a lot of fun to feel cool, like Carrie, for a day! After all, we owe a lot to Sex and the City for bringing cupcake lovers out of hiding. So really, what would Fashion Week be without cupcakes?