Halloween is everywhere today. Kids (and adults) are all dressed up, either waiting to receive loads of candy tonight, or just hoping to put a smile on someone’s face. Houses are decked out, candy bowls are waiting by the front door, pumpkins are carved, and even the cupcakes are celebrating.

Today’s post will showcase cupcakes from 6 different locations ranging from the most popular (like Georgetown Cupcake) to the simple neighborhood grocery store, and everything in between.

The idea for this post came about becuase I heard my local bakery not only had Halloween themed cupcakes, but they also had special Halloween boxes to put them in. I had to go check this out and we decided the other crusaders should see what they could find. We hope you enjoy our collection of spooky sweets!

As I mentioned above, I found out my neighborhood bakery, Hamilton Bakery, created themed cupcakes and were placing them in colorful Halloween boxes. I decided had to have one for myself. They only had the classic Vanilla/Chocolate flavors adorned with creepy fun, so I choose a Vanilla Vanilla with the Bat.

I have to say, for amazing as Hamilton Bakery is at creating pastries, I’m still not a huge fan of their cupcakes. I know the other crusaders might not agree with me, but like before, I think that their cake is a little too muffin like, and their frosting is way to buttery for my liking. But, it was a really fun treat to have for “Halloween Weekend.” 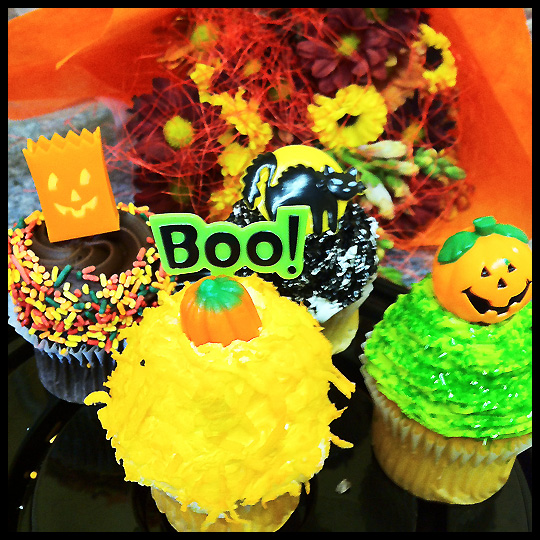 Today was my boss’s birthday, and she loves having a Halloween birthday, so today we surprised her with cupcakes (of course), flowers, balloons, candy, the works. I was so glad that Fresh & Green’s decided to join in the Halloween fun and dress their cupcakes up for the occasion. I heard from my co-worker that the Chocolate Chocolate with the Trick or Treat Bag was delicious. I opted for the Vanilla Vanilla with the Green Frosting and Jack-o-lantern.

Doesn’t he look so happy? And it wouldn’t be Halloween without some Candy Corn and Chocolate Eyeballs to wash it all down with. The cupcake was decorated with a plastic, confetti-like, edible sprinkle. I’ve had edible glitter and edible gold, but I’ve never had edible plastic before, so I was a bit skeptical. After biting into it, the edible green stuff seemed to stick to my teeth, but it quickly dissolved. I’m not sure if this would be okay on a normal day, but for Halloween, it was just fine by me. The cake was the typical fluffy cake they had before and the frosting was the same wiped cream that I tend to enjoy. I was a little disappointed to see that their price has increased from $.99 to $1.50 per cupcake, but I’m going to assume that is becuase of all of the added decorations. And still, at $1.50 for these cupcakes, it puts them at half the price of most cupcakeries and bakeries. 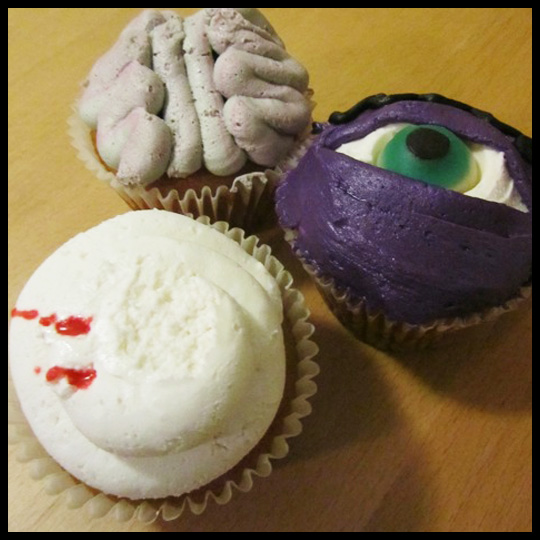 The moment I bought these six hilarious cupcakes from Pirate Cupcakes in Baltimore, Md., (sold exclusively through Captain Larry’s in Locust Point) I thought to myself, “Did I just spent $28 on a gimmick? Oh crap!”

I had bought two seeing eyes, two exposed brains and two vampire bites. They were out of mummies and spiders. The bartender at Captain Larry’s handed them to me unceremoniously in a plain styrofoam container (slightly squishing the brains and bites). I brought these crazy cool cupcakes home for further investigation and, you know, tasting. I selected the brain to sample first.

Mmm. It was a great surprise. Frankly, I started to think zombies might be on to something! It was huge, moist and flavorful. The madagascar vanilla bourbon spice frosting doesn’t just look killer. It was in good proportion to the cake and not so sweet that I didn’t want more. Inside, the cupcake was vanilla spice pumpkin with a pumpkin cream filling. Every bite of this delicious brain was good. Almost worth an arm and a leg, even!

Though Pirate Cupcakes loses a few points from me for presentation that doesn’t reflect the awesomeness of its super icing design, it absolutely gets this crusader’s thumbs up. Somebody bring me more body parts!

Hearing that one of my favorite local bakeries, Starry Night Bakery and Coffeehouse, had cupcakes decorated for Halloween, I decided that I should head over there and check them out. There wasn’t a big selection of varying decoration, but I did manage to get a seasonal favorite, the Orange Cranberry , with a spider web and also ventured into their standards section for a chocolate cupcake with a chocolate ganche frosting and gummy eyeball.

(Note: Prior to photographing the cupcake I accidentally dropped the box on it’s side, so the cupcakes sustained minor damage to the decorations.)

The Orange Cranberry appeared in our original review of Starry Night and this is the third time I’ve ordered it. I think that speaks for itself! 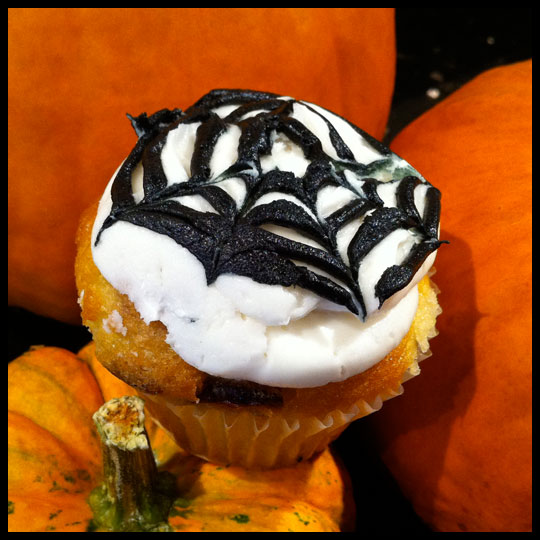 The chocolate cupcake was the first time I’ve ordered something from their standards and I have to say…YUM! While the cake was your standard chocolate cake, the icing was something between what you would find on a Berger cookie, a Baltimore favorite, and a chocolate frosted donut.

Although the decorations were on the minimalistic side, I fully enjoyed the taste of both of my selections and still had fun picking out which Halloween themed cupcakes I should get! 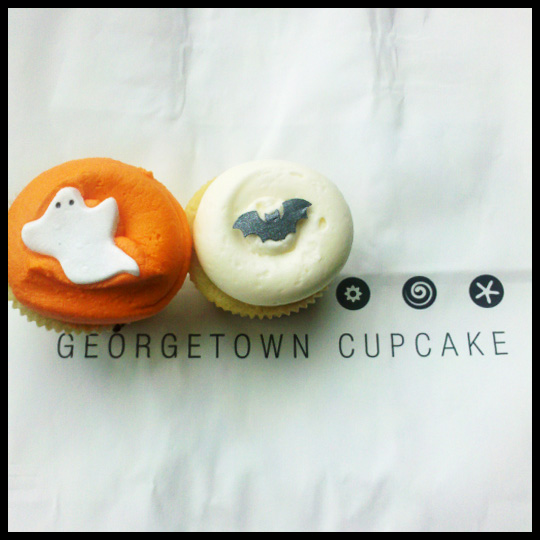 Both of these cupcakes from Georgetown Cupcake were Vanilla cake with Vanilla butter-cream icing (with some food coloring for the Ghost, orange icing!)

While they are on the more simple side, and not something I would normally order, they where simply tasty! The cake was moist, the icing was just what I expect from Georgetown, and they are the perfect size and price (in my Crusader opinion). I was very lucky that I got the LAST one with a ghost decoration and the orange icing – Lucky me!!

The cupcake decorated with the Ghost is Caramel Apple and it was YUM! Apple-y delicious moist cake with a smooth dreamy caramel frosting. This is one for the cupcake record books!

The one with the signature Sprinkles Cupcakes‘ circle done in orange and black is Red Velvet. It was super moist cake with subtle cream cheese icing. This has easily moved in as my second favorite Red Velvet. I’d go back for them again!

Over all, the decorations were simple, but were on anything-but-simple cupcakes!

We hope everyone enjoyed our collection of tricky treats. It’s not too late to go out and find some of your own!

I’m so predicable. I say this because when it’s anyone’s birthday and I’m put in charge of sweets you can pretty much guarantee that I will get cupcakes. On Wednesday we had an office birthday. One co-worker was getting a card, another some flowers, and I was in charge of dessert. I decided to check out the new local grocery store, Fresh & Green’s. It hasn’t gotten good reviews, but it was convient, so I decided to give it a try. I haven’t had a chance to walk around, but I will say that they had a great selection of pastries and desserts to choose from in the bakery and the woman who was working there was very pleasant. She was eager to help and had a really positive attitude.

My goal was to get something different than my norm. I was determined to not walk into that office with cupcakes. I like being reliable, but not predictable, so I really wanted to surprise everyone by getting something different. I browsed their bakery section looking for something that would provide a nice variety, but I ended up with no choice other than cupcakes. 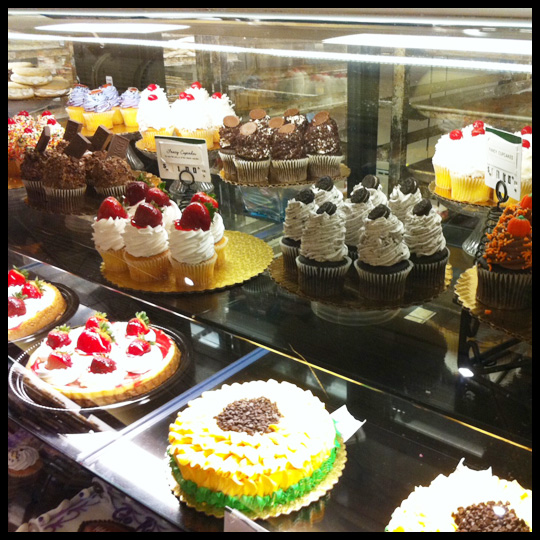 Their cupcakes are only $1 each, and we only had 4 employees in the office that day, so this offered the best variety for the best price. I decided to get 6: Vanilla/Vanilla with Rainbow Sprinkles, Chocolate Crunch, Reese’s Peanut Butter Cup, Strawberry Shortcake, Chocolate/Chocolate (Halloween version), and Chocolate/Chocolate with a Hershey’s Kiss.

The Birthday Girl decided on the Vanilla/Vanilla with Rainbow Sprinkles and raved about how good it was. I had been eying up the Strawberry Shortcake, so on the first chance I got, I went and grabbed it.

Normally I would say that the frosting to cake ratio on this cupcake was WAY out of control, but this cupcake actually had whipped cream on top, not overly sugary-sweet frosting. I decided to eat some of the frosting with the strawberry, then eat some just off the top becuase it was good, and then I decided to eat the rest with the cake at the same time. The cake was really light and airy. Not dry and dense like most grocery store cupcakes. 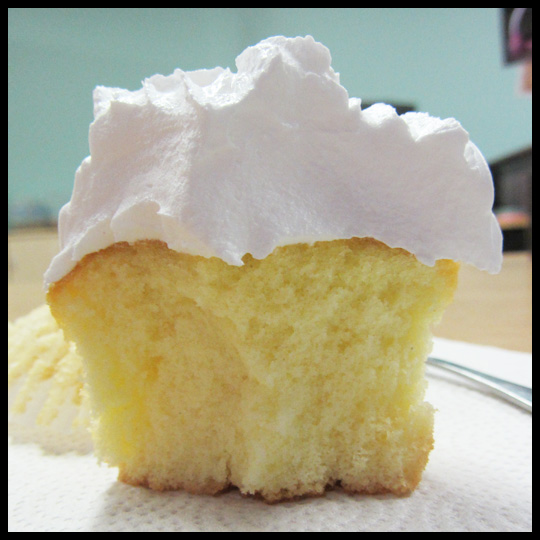 Overall, I was incredibly impressed. If I were to change one thing about this cupcake I would have added a strawberry filling, to keep that theme throughout the cupcake. But for only a dollar, I’m not complaining.

The next day I decided to try a little bit of the two that were left: Chocolate Crunch and Chocolate/Chocolate (Halloween version).

Again, I was really nervous about the frosting/cake ratio especially since this one was chocolate and I tend to be a bit picky about my chocolate frosting, but I was pleasantly surprised. It was more of a chocolate mousse than a typical frosting, and it was good. REALLY GOOD. The cake was a bit dry, but I think that is becuase it was a day old and not stored properly. Two co-workers had the Peanut Butter Cup one the day they were purchased and didn’t seem to have any complaints.

We’ve got two birthdays in the middle of October and with the price, convenient location, and quality of these cupcakes I’m hoping I get picked to bring dessert in again.  🙂