When we found out our graphic design colleague, Kristina, was in a cupcake club and had organized their first ever Cupcake-A-Palooza, we had to find out more. Luckily she agreed to be a Guest Crusader and share her story and reviews with everyone! Thanks Kristina!

Well, it all started about a year ago, with me, two of my friends and our mutual love for cupcakes. We decided we needed a cupcake club. Better yet, a SECRET cupcake club, just because that’s more fun, complete with a secret handshake and secret knock! We started meeting once a month, and on members’ birthdays, just to eat and critique those delicious mini cakes. Little by little we started inviting more friends (and cupcake lovers) until we completed the group at 6 (it’s worth mentioning, we are coed). This way, when we bought a dozen cupcakes, everyone could have 2.

And then Cupcake-A-Palooza came to life. We realized there were so many cupcake shops we were missing out on because either they didn’t deliver, or they were not feasible to get to during a workday.  So we picked a day – August 10th – where we would take the day off of work and go on what is now dubbed “a cupcake crawl.” We decided to hold our first annual event in DC.

We chose 10 bakeries/cupcakeries to try and one of the club members graciously mapped out our plan of attack. But what is Cupcake-A-Palooza without an event T-Shirt? I’m not only a cupcake lover, I’m a graphic designer, and so, our t-shirts were born. 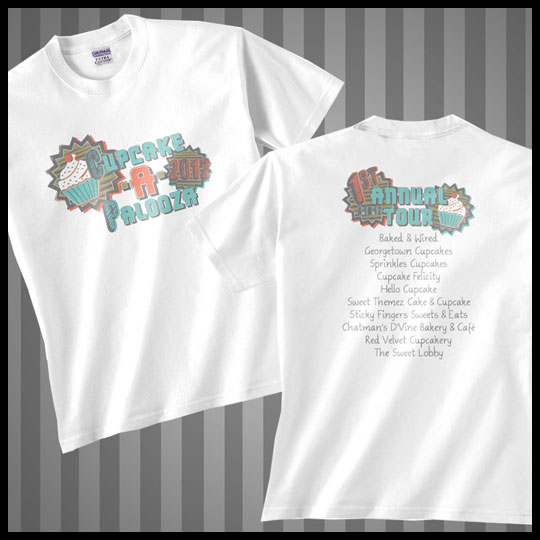 (Our official Cupcake-A-Palooza t-shirts, complete with a concert tour inspired list of stops!)

Decked out in our matching tees, we headed into DC and began Cupcake-A-Palooza. After four hours of eating cupcakes, here’s how I think the shops rate (with the help of some of my club members)…

1. Baked & Wired (Georgetown)
This happened to be our first stop. So not only did I need a cupcake, I needed some caffeine! I decided on the Dirty Chai cupcake. And just to stick with the theme, a Chai Latte. Both were outstanding!

The cupcake was bigger than usual, but the cake was perfectly moist throughout. The espresso buttercream melted in my mouth and was just strong enough to complement the spice of the cake. As an extra treat, it was topped with a chocolate covered espresso bean. Yum! This cupcake and latte left me longing for fall…

2. The Sweet Lobby (Capitol Hill)
This was our final stop of the day. There were so many interesting flavor choices, that I went a little cupcake crazy here. I decided on Chocolate Raspberry, Green Tea Pistachio, Caramel Apple, Bananas Foster, Butterscotch Crunch, and Pineapple Inside Out. I gave a couple of them to another club member and gifted a couple. Ultimately, I only tried two.

The Butterscotch Crunch won me over in two bites. As soon as I hit the butterscotch center, I was sold. The vanilla cake and buttercream were an excellent balance so that the butterscotch flavor was not overpowering. Topping it off, were some Butterfinger crumbles.

As an avid Green Tea drinker, the Green Tea Pistachio cupcake was an obvious choice. Although, I’ll admit, I was skeptical. This cupcake is a Cupcake Wars Winner and one of The Sweet Lobby’s signature “MacTops,” meaning it had a Green Tea macaroon on top.  At first I thought, this is different…then, half way through, I thought, this is good! I enjoyed the cake with the bits of pistachio and macaroon most. I wasn’t crazy about the green tea buttercream; I would have liked it to be a little sweeter.

3. Georgetown Cupcake (Georgetown)
With all the hype and long lines…I really didn’t want to love Georgetown Cupcake, but it was inevitable. I was excited to try one of their seasonal cupcakes, Banana Split. Complete with sprinkles, hazelnut bits, fudge drizzle and a cherry on top, I felt like I was indulging in the real dessert. The vanilla cream cheese frosting was so smooth and acted as the ice cream, while the fudge center mixed perfectly with the banana cake.

Another club member tried Georgetown Cupcake’s other season flavor, Blueberry Cheesecake. The fresh blueberry cheesecake was just as advertised. The cupcake had the graham cracker bottom, adding to the authenticity of a cheesecake. While there was no icing, the top had a soft cheese texture and a blue fondant flower.

4. Hello Cupcake (Dupont Circle)
This shop prides itself on its use of fresh and all natural ingredients. Well, it’s working. It was a no brainer as soon as I saw the selection; I went for the flavor of the month, Root Beer Float.

I imagined sipping the real thing while I enjoyed this spicy/sweet cupcake topped with vanilla cream cheese frosting (my absolute favorite) and a fun chocolate straw. This cupcake was rather refreshing.

5. Sweet Themez Cake & Cupcake (Adams Morgan)
The employee in this shop won brownie points with his enthusiasm over our Cupcake-A-Palooza tees. He even offered me a dozen free cupcakes if I send him one!

(Sweet Themez isn’t as glitzy as some of the other shops from the outside, but it’s worth the stop)

I can’t vouch for myself on this one, but one of the club members had the Cookies ‘n’ Cream cupcake. The scent of the cupcake was amazing – it made you want to dig right in! While the rich chocolate cake was moist, it crumbled. The icing and the mini Oreo on top made the cupcake.

6. Red Velvet Cupcakery (Penn Quarter)
This shop is teeny, tiny. So if you pay them a visit, don’t plan on staying to enjoy your cupcake inside. As a coffee lover, I chose the Hazelnut Café cupcake.

(Hazelnut Café on the left, another club member’s Carrot Cake cupcake on the right.)

However, I was disappointed. The cake was pretty dry and was only saved by the bits of crunchy hazelnuts throughout. I wasn’t a fan of the whipped icing, as I always prefer something creamier, but the pinch of espresso on top was a nice touch.

7. Sprinkles Cupcakes (Georgetown)
I was really looking forward to trying Sprinkles, as I had heard mixed reviews. I’m a sucker for pumpkin anything, so I went for their Pumpkin cupcake. 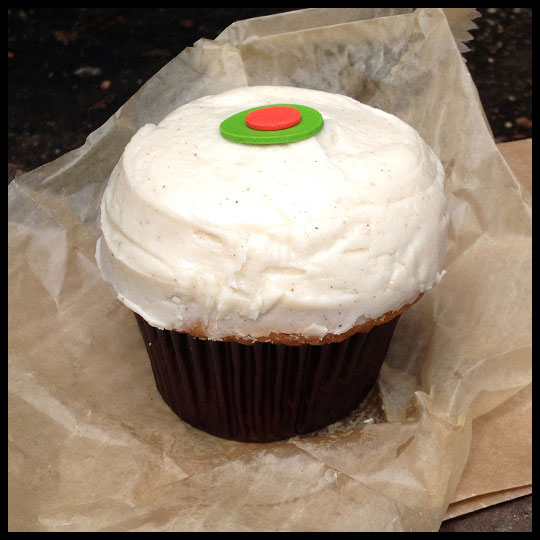 I was really hoping to taste pumpkin, but the flavor was barely there. It was overpowered by the cinnamon cream cheese frosting, which was the only part of the cupcake that I enjoyed. On top was one of Sprinkles signature modern dots, which added no flavor value.

8. Sticky Fingers Sweets & Eats (Columbia Heights)
This shop is 100% vegan. While I am not, I recommended we add this shop to our list of stops 1) Because I liked the name 2) They were two time Cupcake War Winners and 3) My mom went dairy free in the past year for health reasons, so I wanted to taste things from her perspective.

I had not had a red velvet cupcake all day, so I tried theirs. Unfortunately, I couldn’t even finish it, and neither could my fellow club member. I found the cake to be plastic-y and lacking in flavor, but as the shops name suggests, it actually was also sticky! I thought the icing was grainy, and was not up to par with the other cream cheese icings of the day. Lesson learned: I need my dairy.

However, another club member saw it differently. She tried the Lavender Lemon. Although she found the cake to be denser than non-vegan cupcakes, she thought it was moist and quite delicious. The lavender flavor was very present, without being overwhelming. Lesson learned: try it for yourself!

Out of the 10 stops we planned to make on Cupcake-A-Palooza, we only made it to 8.

When we got to Cupcake Felicity, or at least, what used to be Cupcake Felicity, it was no longer there. Instead there was a café called Bread & Brew. We found out that Felicity, who also makes 100% vegan cupcakes, now sells her cupcakes to the café. Unfortunately, they did not have any available that day. Chatman’s D’Vine Bakery & Café was supposed to be our last stop, but by 2PM we were stuffed and coming down off our sugar high. The shop didn’t open until 3PM, so we decided to save it for another time.

The Cupcake Crusaders are gearing up for their “2011 Annual Cupcake Tour.” Last year we went to DC, but this year we decided to stick to the outskirts of DC and will be hitting 4 stops (maybe 5) in the Bethesda, MD area. With our tour coming up this weekend, we thought we would share some photos of our DC tour from last year. Hope you enjoy!

No tour is complete without a logo and a sticker. All the Crusader’s wore these during each stop. We got some funny looks, but that’s okay, it was all a part of the fun!

Here we are, sporting our nifty badges.

Our first stop was the well known Georgetown Cupcake from the TLC show, DC Cupcakes. The line was totally worth the wait.

Elisa and Stacy selected 2 Salted Caramels, 1 Mint Cookies N Creme, 2 Key Limes, and 1 Ginger Peach. The Salted Caramel is probably the best cupcake either of them has ever had.

The next stop was Red Velvet Cupcakery. It was NOT the favorite of the day…

But their cupcakes were simple and pretty.

So many to choose from and we were almost “cupcaked out.” But it’s a good thing we pushed through because they have got some GREAT cupcakes! 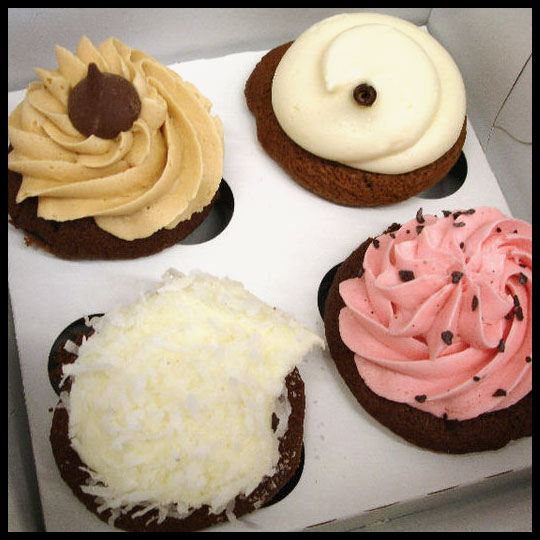 Crusader Stacy selected a Yo Tart! Which is lemon cake and lemon frosting. She also got a lemonade… that’s a lot of lemon!

Crusader Stacy decided to take a Peanut Butter Chocolate home and share with her husband. It was really good!

During this last stop, owner and executive chef of Hello Cupcake, Penny Karas, came out and sat with us. It was such an awesome way to end our tour!

We had an amazing time last year and hope to discover some great new cupcakes during our 2011 “tour!”

With a possible bonus location at:
– Cake Dreams: Rockville, MD (Winner of “Going for the Gold” Cupcake Wars)