Fall is in full swing and it is officially pumpkin season. With these cool fall days I can’t help but think of toasting marshmallows by a campfire and making s’mores… What could be better than putting those ideas together for my next cupcake experiment? Ok, I’d love to claim this as my idea, but really it was Crusader Stacy’s. While away on our annual girls trip we were chatting about what kind of cupcake I should make and it all came together. Every year I make pumpkin pancakes on our trip and Crusader Stacy is our s’mores queen. BAM! An idea was born. And it might be my best cupcake yet! 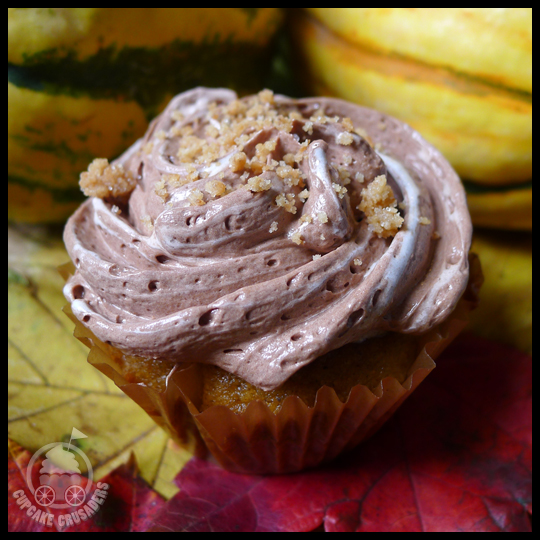 (A little fall foliage for a fantastic fall flavor!)

Two of my favorite things put together created the perfect fall cupcake AND it was SO good. The graham cracker crust added a flavor and texture that helped make this cupcake truly taste like a s’more. The cake was moist, spicy and didn’t turn out muffiny (which some pumpkin cakes do). The frosting was smooth and, considering it was my first chocolate buttercream ever, it might be the best frosting I have ever made. I baked the leftover crust ingredients and crumbled it on top – that pop of crunch was the perfect way to finish this cupcake. 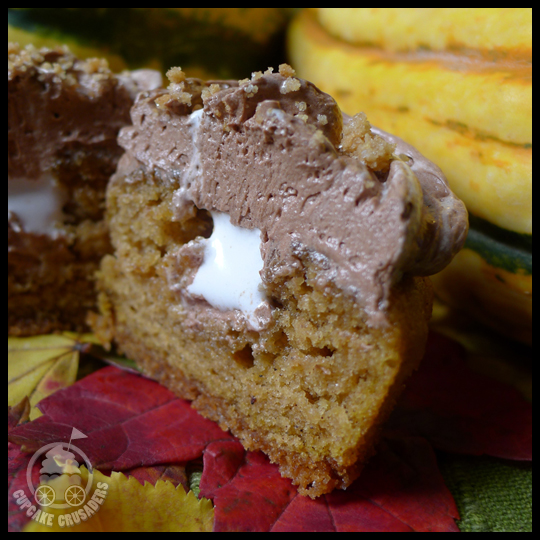 (Check out that yummy filling!)

I did run into a couple of issues with this baking experiment. The first being that the cake recipe made many more than the 18 that was stated. Granted I had graham cracker crust in the bottom, but after making 2 dozen cupcakes, I had enough batter left over to make at least another dozen. The other issue I ran into is the marshmallow fluff edge on the frosting. I thought it would be as simple as lining the pastry bag with fluff, adding the frosting and presto. Well, not so much. Lining the pastry bag would have worked had I used two types of frosting, but the fluff was a bit too sticky and didn’t line the edges of the chocolate buttercream the way I wanted. It still looked cute and tasted great, so this was only a minor bump in an otherwise smooth baking road.

Overall this cupcake was a total baking success. Sweet, spicy, chocolatey, and with the perfect amount of pumpkin, this cupcake concoction embodies its namesake campfire treat. I’m so glad our girls trip inspired such a fun and interesting baking experiment. Who knows what we’ll come up with for my next flavor – if you’ve got an idea for an interesting (and filled) cupcake that you’d like me to make, let us know below!

Everyone has different tools and techniques to create a filled cupcake, and we Crusaders thought it might be fun to test different filling tools. Having baked and filled cupcakes for over a year now, you’d think I would have fancy tools to cut out the “plug” (aka the piece of the cupcake that you take out so you can fill it) but I don’t. A small curved pairing knife that my Nona gave me has always been my tool of choice, so this tool test gave me the perfect excuse to buy some fun new kitchen items. After reviewing suggestions from our Facebook page, Crusaders Jenn, Stacy, and I decided which tools we would test, and I set out to bake some cupcakes. 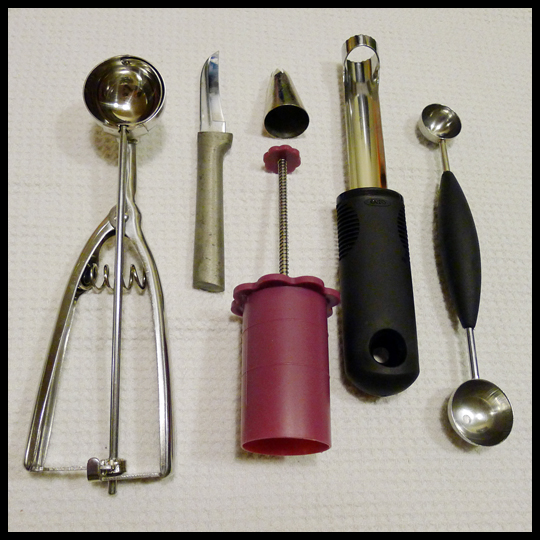 (The six tools of choice.)

I found the Betty Crocker box of the Hot Chocolate cupcakes (which Crusader Stacy had made and reviewed) for half price and decided to use them for my test cupcakes. Once the cupcakes were baked and cooled it was time to put my tools to the test. 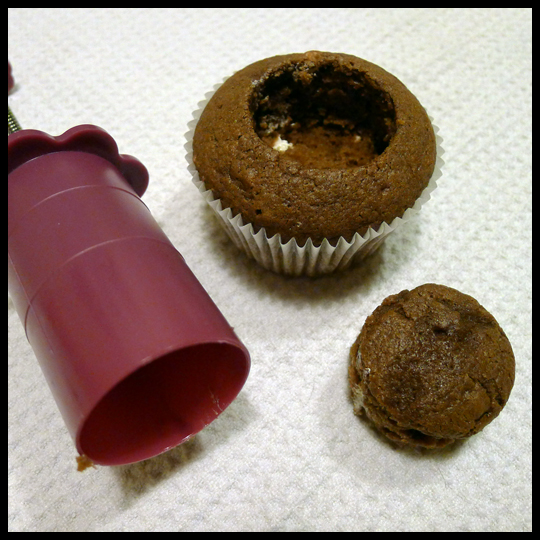 While this really did a fantastic job of removing a perfect plug, I think the amount of cake it takes out is too large. It seemed as though there was so little cake left around the edges that it might not stay together when you pulled the wrapper down. If the diameter of the plunger were just a little smaller, this would be the perfect filling tool, especially because the push plunger makes removing the cake plug super easy. 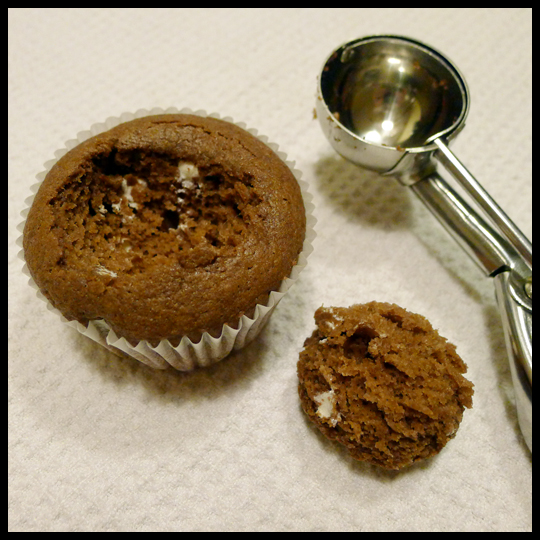 I only just got the mini and large scoops for Christmas, so having a chance to use the mini for this tool test was exciting. Sadly, it didn’t work perfectly. You really have to use your fingers to hold the cake while you scoop and then the filling hole it creates is too shallow and wide, again diameter is an issue. 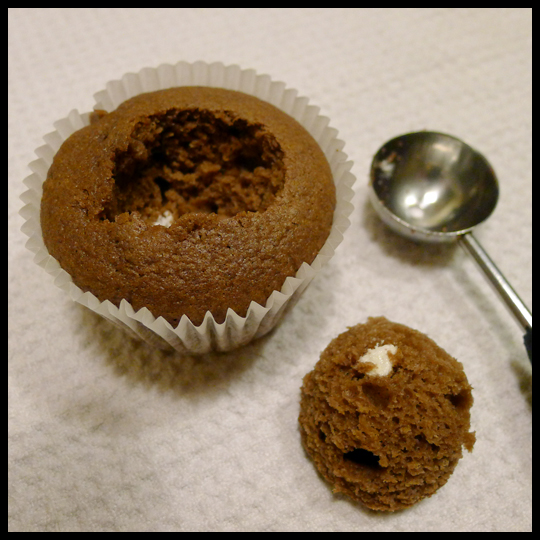 Who would have thought, a melon baller?! The melon baller I purchased has two ends, one large, one small, so I used the small one as the test. Similar to the small scoop, I had to use my hand to hold the cake while scooping. This did create a smaller filling area, but still felt a bit too shallow for the perfect filling amount. Not a bad little tool to have though, and now I can make those cute little melon balls this summer. 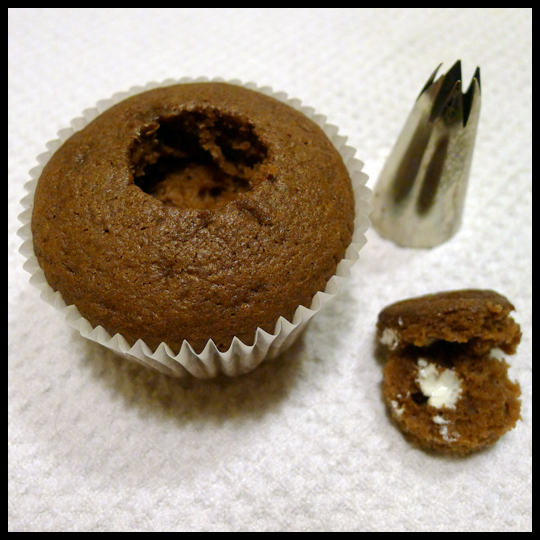 This was an interesting suggestion, but one that worked pretty well. The larger tip easily pushed down into the cake and removed the plug, but getting the cake out of the tip was the harder part. Using a toothpick made it a little easier, but the plug still ended up breaking into two pieces. Not a total tragedy, but not the easiest tool when you have to have another implement to help you clean out the cake plug. 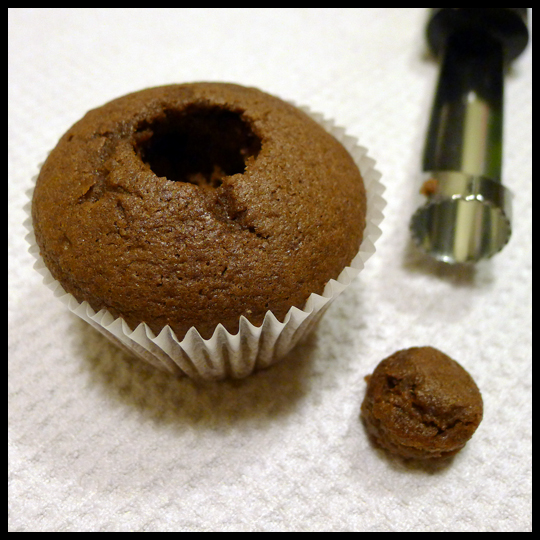 I was very skeptical about this, but was also very excited to purchase this tool… and my excitement rose when I used the apple corer to create the filling hole. Not only does the corer cut right through the cake, but because it is has an opening you can push the plug right through the bottom. It creates a very uniform hole and you can also make it as deep as you’d like. This might create a hole that is a little smaller in diameter, but it works very well. 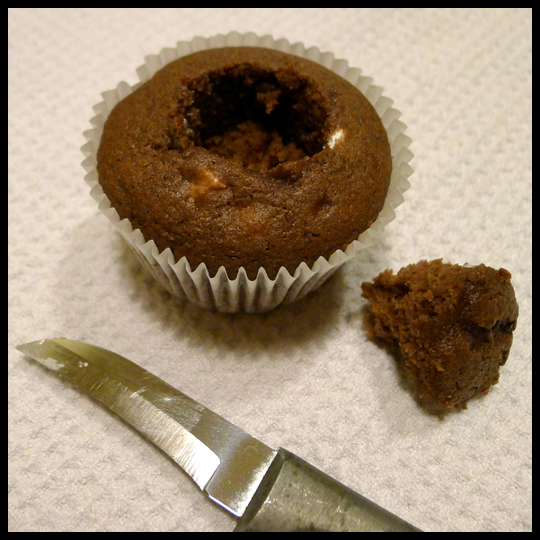 Having had lots of practice with this tool, it didn’t fail me in this tool test. What’s nice about cutting the plug out with a little knife is you have complete control over how wide and deep a plug you cut, creating the perfect amount of space for your filling. This might be the simplest tool, but it is still my favorite of the bunch. 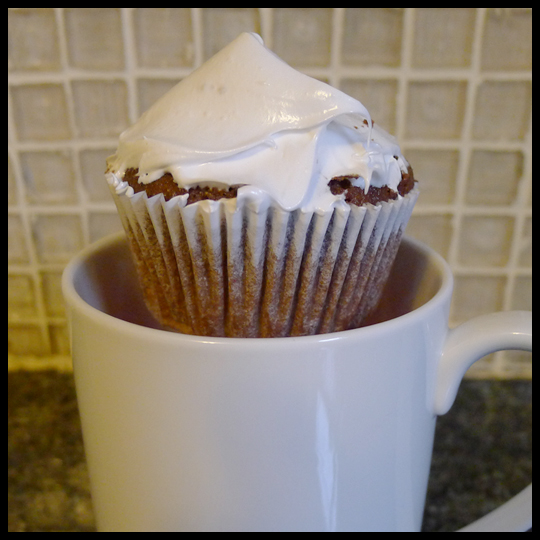 (The finished hot chocolate cupcake! Filled with marshmallow fluff, WOW were these good)

None of our tools were failures, they all made room for filling, but some did work better than others. The best tool really does depend on what size you would like the filling hole to be and how much filling you want in the cupcake. Or perhaps you are just set in your ways like me, and prefer using a trusted tool and technique. Either way, I’m looking forward to using all of these tools for other baking and cooking experiments. I’ve already thought of other ways to use the cupcake plunger (cookie cutter anyone?) and can’t wait to core some apples.

Next tools to test: what tool to use to put filling into that hole! I use a tiny spoon or a piping bag… but who knows what our readers and followers might suggest!