Over the past month the Crusaders have been working hard to prepare for a series, which will be featured on our blog next month. Going along with our “Top 5 in Baltimore City,” featured on kimberlyloc.com last November, this series will be our Top 5 favorite places outside of Baltimore City (but still within a short driving distance). This means we have eaten A LOT of cupcakes. So, for February, we decided to share some of the new spots we’ve visit, but you’ll have to wait until March to see our final Top 5 picks.

While we were visiting a few bakeries in the Columbia area, we made a stop at Oh, What a Cake. Although it seems like they are mostly known for their custom cakes, they do sell some baked goods at their storefront, including cupcakes. The selection was fairly simple with vanilla, chocolate, red velvet, lemon, almond and maybe a couple of others. I decided that I didn’t want to go overboard, since this was going to be a big cupcake day for us. My cupcake selections only included the almond and lemon. Stacy also purchased the almond cupcake and Elisa got the red velvet. I also decided to try the red velvet cake pop. 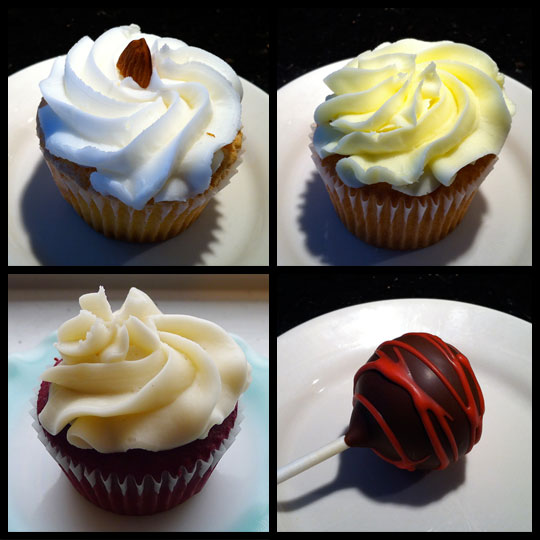 Our review for each cupcake is pretty much the same. They are good, but not great. We didn’t find any flavors or qualities that stood out and made us think, “Wow!” The cake was moist and light, with a texture similar to what can be achieved with a box mix. Unfortunately the flavors were the same.

The real star of this trip was definitely the cake pop. It was very moist and rich, almost truffle-like. This made me wish I’d gotten the two other cake pop flavors, vanilla and chocolate.

This isn’t the first time we’ve been disappointed with a bakery whose main purpose is for wedding and custom cakes. If you are looking for a cake, the reviews are fantastic, so I wouldn’t pass them up. However, if you are looking for cupcakes that make you say, “Oh, what a CUPCAKE!” I would suggest skipping them.