Not that this will surprise anyone, but I love baby showers. And bridal showers. An excuse to celebrate with food, games, gifts, and a room full of women? Sign me up! A friend of mine, Lyndsey, is expecting a baby girl soon, so that means that I recently got to attend her shower. But it wasn’t just any shower…it was hosted by her sister, Guest Crusader Jessica, of Poundcake Press. Jessica is a very talented designer who loves cupcakes as much as the rest of us. I knew this party would be great, including all the fine details that don’t go unnoticed by a party lover.

Jessica came up with a great theme and coordinated the food, decorations, and signage into one cohesive look. The pink cake was amazing, with four pink layers and sprinkles that looked liked glass beads. But the real star (other than the momma-to-be, of course!) were the push pops. I’ve been wanting to try cake push pops, so imagine my excitement to see them at the party. I should have known, since the theme was “Pop!” Duh! I grabbed one right away, with permission from the host, and I’m glad I did because they went FAST.

The push pops were chocolate-chocolate with colorful sprinkles. I love that the containers are so easily available to us DIY party lovers now. I think the best part of a cake push pop is the experience. They are fun and nostalgic, reminding me of the ice cream push pops I used to eat as a kid. And with the stands that Jessica made, they added that extra “Pop!” to the dessert table.

I was honored to be a part of the celebration and happy to indulge in all the treats. Lyndsey, who will be an amazing momma, and Jessica, who will help her little niece become the perfect little cupcake lover, are wonderful ladies to be around. They laugh easily and often, and it’s contagious, so anytime I get to see them is always a great day. Throw in some sweet treats and I’d call it a perfect day!

(Crusader Stacy and myself at our bake sale table. Look at all that pink!)

For Breast Cancer Awareness month, the Cupcake Crusaders wanted to do something to help the cause. You may have noticed that we decided to “Go Pink” on our Facebook and Twitter pages, but that’s not all we wanted to do. On October 28th, we held a bake sale at Horizon Church in Reisterstown, MD, to raise money for Susan G. Komen’s Passionately Pink, which encourages fun ways to get the community involved.

(Full view of our table with all our baked goodies.)

After our last bake sale to raise money for No Kid Hungry, there was a lot of excitement to have the Crusaders back, which made us feel really good. There was a nice variety of treats, including cupcakes, cookies, brownies, and Rice Krispie treats.

Jackie from La Casa de Sweets was kind enough to donate 2 dozen chewy chocolate chip cookies, and they were some of the best cookies I’ve ever had! Our mom also made 4 dozen brownies!

(Cookies from La Casa de Sweets, which sold out!)

Crusader Stacy made her (now famous) Chocolate Raspberry cupcakes, and dressed them up with pink wrappers and sugar crystals for the occasion.

I tested out a new recipe, Sprinkle’s Strawberry cupcakes with strawberry buttercream, which we’ll be posting a full review of soon.

(My Strawberry cupcakes with naturally pink cake and frosting.)

The bake sale was a huge success and we nearly sold out of everything. We raised much more then we anticipated: $132 in sales and $65 in donations, for a total of $197.00! We would like to give a big thanks to our Horizon friends and family who were so generous in their support. In total, we raised $254 dollars thanks to donations to our Passionately Pink page! If you’d like to help out, it’s still not too late to donate. Check out our Passionately Pink fundraising page…every little bit helps.

You may have seen that the Crusaders have “Gone Pink” on our Facebook and Twitter pages to help support Breast Cancer Awareness for the month of October. We wanted to do more than just that, so we’ve created a team, “Cupcake Crusaders for a Cure,” on Susan G. Komen’s Passionately Pink website. For the remainder of the month we will be raising money for the cause.

Susan G. Komen Passionately Pink for the Cure® supports life-saving research, education, screenings and treatment programs in the fight to end breast cancer forever. It encourages creative, fun ways to raise money, including wearing pink for a day to promote awareness. Their website provides some ideas for community, workplace, and family fundraisers, but being Cupcake Crusaders there’s only one thing for us to do here…a bake sale!

We will be hosting a bake sale at the end of the month at our community church. If you’d like to join our team, let us know! You can host your own local bake sale and donate the proceeds, or even start your own team! What’s important is getting involved and keeping in mind that no amount is too little and every bit helps. If you would like to donate to our team, visit our Passionately Pink page. Thanks for helping with our latest crusade! 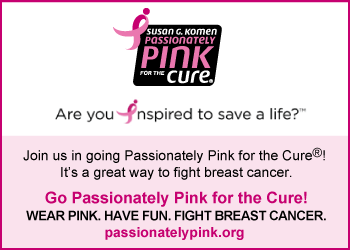 I’m not exaggerating when I say that Lylah, my 3-year-old niece, talked about her birthday party for 3 months. It started when her little sister, Lily, turned 1. “It’s my party? Those are my presents?” she would ask. Then when Leah turned a year old, we got the same questions, only to answer, “No Lylah, those are Leah’s. But your party is next!” As soon as items were purchased for her party, I was greeted with, “Auntie Jenny! Look at my princess party!” For the next few weeks, she talked about her princess party, which would have (of course) princess cupcakes.

We had all the fixings for a perfect 3-year-old princess party: My sister purchased a Wilton kit that had a Disney Princess cupcake stand, cupcake liners, and picks, and also bought the Disney princess frosting transfers. Crusader Stacy purchased purple metallic liners, which would be a complementing color, and I provided extra pink sugar crystals. Stacy came up with a plan of action for the frosting transfers, which included rolled fondant. After Leah’s party I’m now the fondant “expert” in the group, so I volunteered to help with the cupcakes.

I baked and frosted the funfetti and chocolate cupcakes the day before the party. We used Duncan Hines Strawberry Shortcake Flavor Creations for the pink frosting, which I had to add confectioner’s sugar to in order to pipe.

I did my best to pipe a flat swirl on the cupcakes that would be getting fondant circles placed on top. 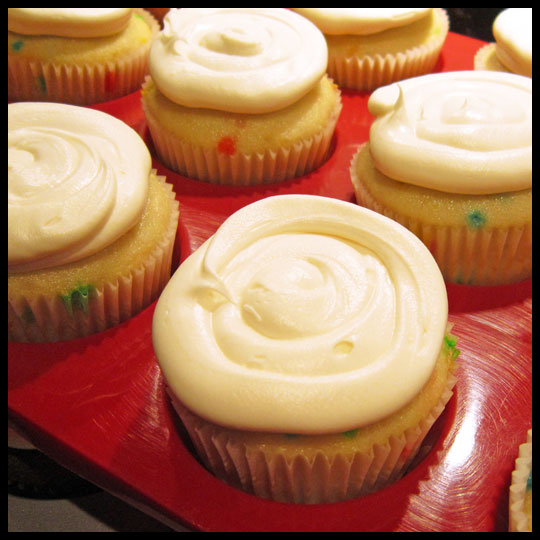 I was really nervous about the transfers. I didn’t want to mess them up, because we didn’t have any extras, so I practiced with one a few days early and it worked great. The ink on the transfer didn’t get funky after a couple of days, so I was able to calm down a bit about preparing the cupcake decorations in advance.

The night before the party I prepped the fondant-transfer decorations, to place on the cupcakes the morning of the party. I rolled out the fondant, like I did for Leah’s birthday cupcakes, this time using the larger cutter to fit the whole top of the cupcakes. Then, following advice I found from Google searches, I used a damp cloth (AKA: a wet paper towel) to moisten the top of the fondant. The instructions for removing the transfer from the sheet worked perfectly and they peeled off easily. 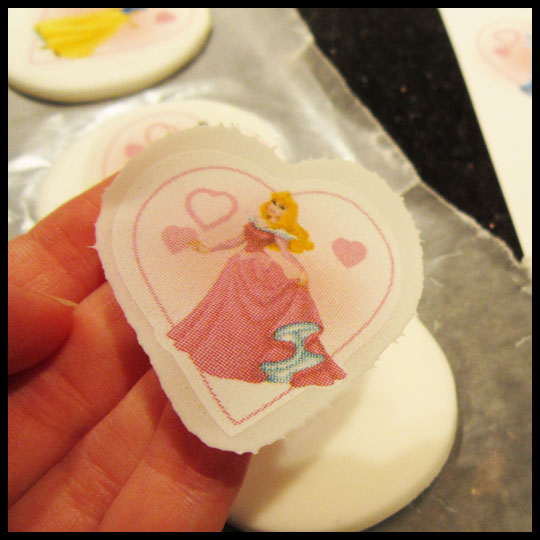 I was really proud of trying something new again and it turning out well. The fondant with the transfers stayed perfect through the night (stored in an air-tight container), so the next morning I was able to finish up the decorating. 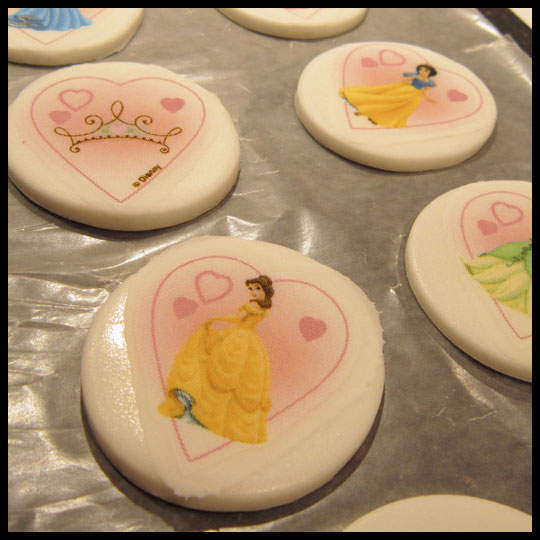 We rolled the edges of the frosting in sugar crystals, just to give it a finished look. Plus, a princess party needs a little extra bling! 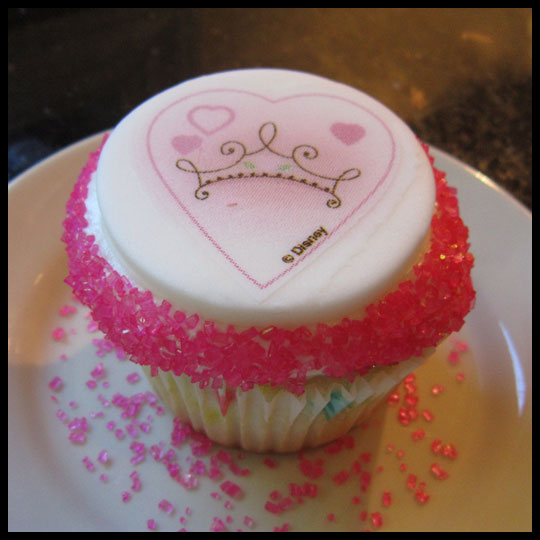 I figured we would have enough time to sprinkle sugar on the pink frosted cupcakes when I got to the party location. Well, I’m glad I waited because as soon as I got in the car, on the way to the party, I noticed that the pink frosting had slide right off the tops of the cupcakes. It was a disaster. I’ve decided that moisture is a big issue with the Duncan Hines frosting and they are better off being left out to “set-up” (which is a problem when you want moist cake). Luckily I was going to be early anyway, so Stacy and I went into cupcake-rescue mode. We scrapped frosting and reapplied it to the cupcakes, sprinkled, and double-lined the wrappers, to hide some of the mess. The results? Not too bad.

Although it’s not exactly what I had envisioned, no one noticed. We did have a few pink survivors, which stayed at the forefront of the display. 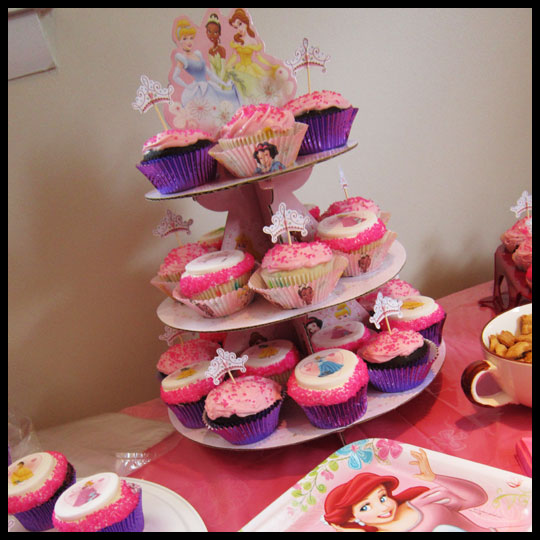 The cupcakes with the fondant and transfers still stole the show and the birthday girl was giddy with delight over her princess cupcakes.

There was one casualty of this experience: my batter dispenser. A fallen hero, really. Cupcake baking hasn’t been the same without it, but it put up a good fight. So long, kitchen accessory. You shall be missed (until I’m able to get a new one)…