I’m sure we have a few Cupcake Wars fans out there, so if you watched this past Sunday’s show on the Food Network, then you’re in for a treat! Shannon, owner and baker of Starry Night Bakery and Coffeehouse who competed for the second time this past week, took some time to answer questions for us.

Most of you know by now how often I treat myself to cupcakes and coffee at Starry Night. I’ve also had the opprotunity to share my love with the other Crusaders, so we were all very excited when we found out they would be on Cupcake Wars for the second time. Everything was hush-hush prior to the show airing, but I had a feeling that this would be a redemption show. On Saturday we picked up our Cupcake Wars cupcakes (flavors from their first show) to have our own little celebration Sunday night.

(Cupcakes in hand and ready to go!) 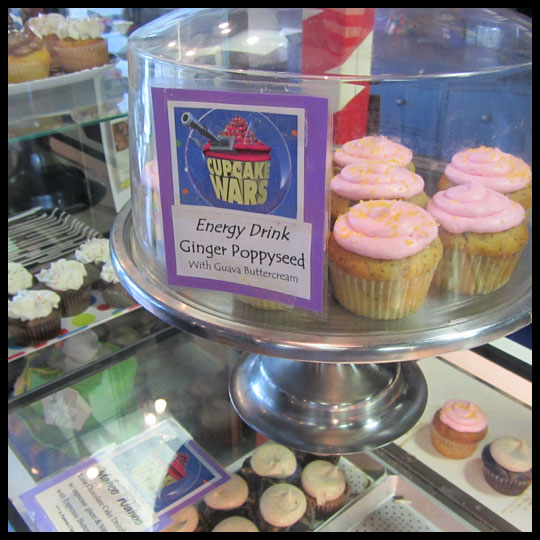 (The Energy Drink cupcakes with Mahoo Wahoo below. Starry Night was ready for us!)

(Cupcakes for my husband and me. I had to throw in a Oreo stuffed cupcake with peanut butter frosting for him!)

Well, it took me less than 10 minutes to devour my two cupcakes, the Mahoo Wahoo and Engery Drink. In this episode the challenge was to incorporate pork BBQ to represent southern flavors. The winners would be taking their cupcakes to the CMA (Country Music Achievement) Awards in Nashville. Right after finishing my cupcakes, smacking my lips, and saying, “Pork?! Shannon’s got this!” came the round 1 elimination. The judges all seemed very pleased with the flavors Shannon and her assistant, Amber, came up with: a sweet potato cupcake topped with BBQ honey glazed ham shreds, maple buttercream frosting, crispy fried prosciutto crumble and a torched marshmallow. Unlike the cupcakes created by some of the other contestants, it looks like something I would really enjoy, a perfect balance of sweet and savory. The judges’ only critique, and a small one at that, was the texture of the frosting. So, you can imagine my surprise (and the surprise of many) when Starry Night was sent home.

But, I guess that’s just how these things work. Maybe something went askew with the frosting during filming, because all I can say is that their maple buttercream is one of my all-time favorites! I was so glad to get Shannon’s thoughts on her experiences with Cupcake Wars:

Crusaders: Have things changed in the bakery since your first episode of Cupcake Wars aired?

Shannon: Things at the shop have been crazy! Saturday mornings and afternoons are awesome because we get to meet so many new faces. People have spent 2-3 hours to travel here, just to have coffee and cupcakes! It is really cool to see little kids get so excited about seeing the shop. Before Cupcake Wars we really didn’t do that many cupcakes. Cakes and desserts were the main focus of attention. Now I am having a blast dreaming up new flavor combos and decorating ideas. We offer 15-20 variations daily.

Crusaders: Were you asked to appear on the show again or did you have to re-apply?

Shannon: They called us and wanted us back. For the short time it was, we had a blast filming again.

Crusaders: What do you like to do to get ready for the competition?

Shannon: We knew from last time to get plenty of sleep and have a TON of coffee in the morning! Being on the west coast on east coast time is not easy! Flying out super early and still being up super late takes its toll. Last time was very stressful and rushed…this time we went with a more laid back, enjoy the journey attitude.

Crusaders: What was it like going back a second time? Did you feel more prepared since you’ve been through the process before?

Shannon: Going back we knew exactly what we were getting into (which makes me question my sanity!). We knew what to bring, what to wear OR NOT WEAR (new Vans on concrete floor for 12+ hours shooting….PAIN)!

Just knowing the process, the area around our hotel, the hotel itself made things a lot less anxiety producing. We knew if one producer called or texted us…10 more of the same would come from other wranglers (assistants).  🙂

Crusaders: Did you return to the show with hopes of redemption, after coming so close last time?

Shannon: Heck yea we wanted redemption! We got edged out by someone who lived 5 minutes away from the set and had been there before! I wanted the win, but really didn’t feel it with the CMAs. It was like getting to candy land and finding out you have to go through in the dark…no fun!

Crusaders: We love the Mahoo Wahoo and Energy Drink cupcake from the first episode! Will you be offering any cupcakes from the new episode?

Shannon: We will be offering our Sweet Potato cupcake with Maple Buttercream. It is the same buttercream we featured last fall on our Sunday Morning Pancake cupcake, Pumpkin Spice & Maple Covered Bacon Chai. Over the weekends we will offer the Pork BBQ version as well.

Crusaders: Most pastry chefs and bakers would be worried at seeing pork as an mandatory ingredient, however after your corned beef cupcake, I know you appreciate savory as well as sweet. When you saw the pork, were you nervous or excited?

Shannon: I wouldn’t say I was excited…I was kind of let down. Pork! Again! We did a spam slider last time topped with bacon. I wanted it to be something new, exotic, and fun!

After playing with so many flavors and combinations at the shop, having to use only one ingredient really didn’t seem thrilling. I was going to make mac & cheese as the  “icing”…maybe I should have gone with that!

Shannon: This whole experience has really given me new life and growth in the shop. It has opened doors, huge doors for us, to play and dance through! I am really happy with the amazing crew I get the pleasure to work with everyday. My job is never boring. Sometimes stressful and chaotic, but never boring. I am living my dream…I get to play in my very own candy land everyday, help local charities, and make people smile. It doesn’t get any sweeter!

As I told Shannon, one of the reasons Starry Night is such a favorite for many of us is the feeling you get walking into the bakery. You can tell how much fun they all have, from the friendly team to the eclectic decor. While we wish they had gotten the redemption they were seeking, it doesn’t matter to us and they will always be winners in our book. And who knows, maybe their chance will come again? In the meantime, I can’t wait to try their sweet potato cupcake, so keep an eye out for that!