This has happened to me on multiple occasions. If it hasn’t happened to you, then well done. You have way more self control than I do.

Recently, after a crazy couple of days, I found myself starring at these jumbo sized cupcakes at my local Safeway: 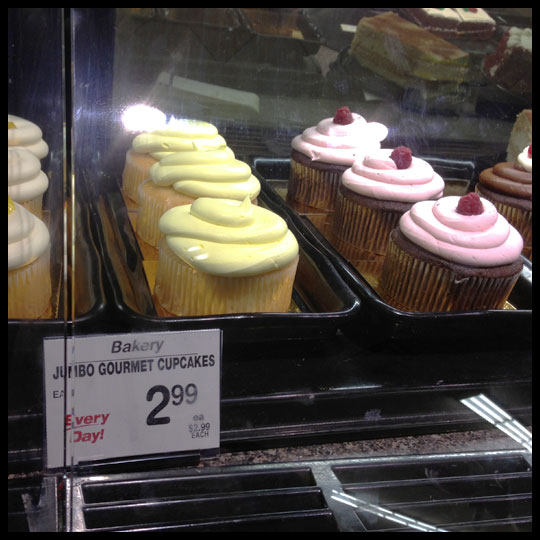 Not only was I curious about how these new gigantic cupcakes tasted, but I was in desperate need of a cupcake (don’t judge… I know you’ve been there too…) I was torn between a couple flavors, but went with my go-to comfort flavor, the Chocolate Raspberry. 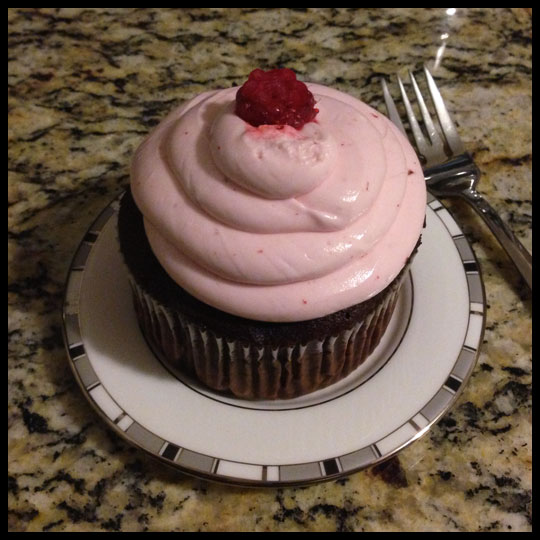 This cupcake was easily the size of two or three cupcakes combined, and a total steal at $2.99. Of course, since it was a grocery store cupcake, I proceeded with caution. While the cake had a subtle hint of raspberry flavor, the frosting completely tasted like cotton candy. There wasn’t an ounce of raspberry flavor present! I tasted it over and over again, to see if my tastes buds were off, but couldn’t get past the artificial cotton candy sweetness. For as much as I love real cotton candy, I don’t like anything that is trying to taste like it (or, in this cupcake’s case, that isn’t supposed to taste like it but still does). The cake was a little dry on the outside, but fairly moist on the inside, and after the day I had, I wasn’t going to be too picky. I finished the cake and trashed the frosting.

As I mentioned above, I have often purchased questionable cupcakes in the past, each producing mixed results. There are two times in particular that are especially memorable for me: first, an awful cupcake from Au Bon Pain in Baltimore’s Inner Harbor, and second, a sketchy looking cupcake from Target in White Marsh, MD, which ended up being okay. 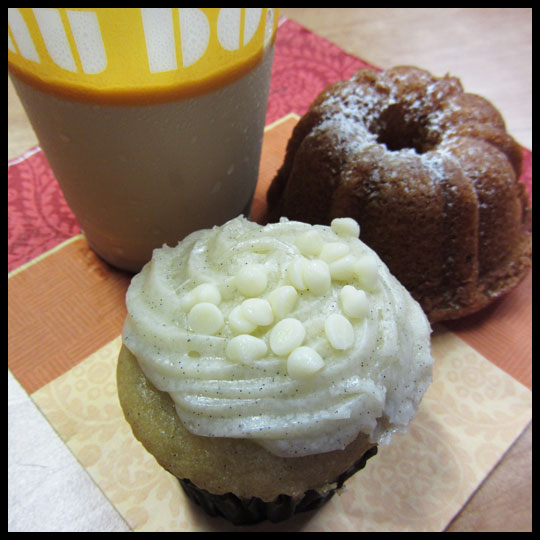 I had heard bad things about the cupcakes from Au Bon Pain, but I wanted some coffee so decided to stop in one afternoon. Of course, I couldn’t resist browsing the desserts while I was there and left with more than just an iced coffee (ignoring all advice to avoid the cupcakes). I really should have taken a closer look at the Vanilla cupcakes before spending $3 on it. The frosting looked like half melted wax, and it certainly didn’t taste any better. Even though you can see the vanilla bean specks, there wasn’t any vanilla flavor and it had a weird texture. While the cake had a decent flavor, it was completely void of any moisture, like a dried out sponge. I decided to try and microwave the cupcake to see if I could salvage the cake (the frosting was a lost cause), but that didn’t do anything to help, so into the trash it went. At least I had a tasty iced coffee to comfort me and my cupcake sadness.

With a handful of “What was I thinking” cupcake moments under my belt, you would think that I would learn when NOT to buy a cupcake, but we’ve vowed to try them all, and it’s something we take VERY seriously (well, as serious as cupcake eating can be). And, for as many bad experiences as I’ve had, there are also some not-so-bad ones too, like this Ticklebelly White Out cupcake from Target. 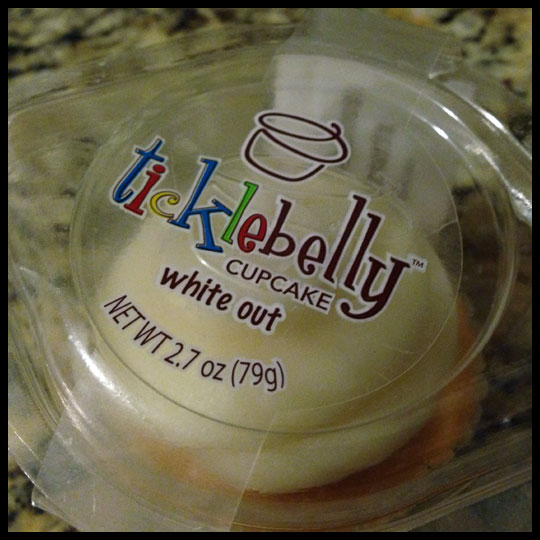 I really wasn’t expecting much from this cupcake, but it came in a cute little to-go container, and since Crusader Jenn has had such great experiences with Kimberley’s Bakeshoppe (found at her local Walmart), I figured I’d give it a try. Plus, it was only $1.29.

(Ticklebelly White Out cupcake from Target)

The cake was a little spongy and commercial tasting, but it was also more moist than a typical grocery store cake. The frosting was a little greasy (I think they used some kind of shortening as the base), but not overly sweet, with a nice flavor. The biggest surprise was the filling (I didn’t even know it had a filling!). It was a pastry cream that was actually pretty good. Overall, this cupcake was totally worth its low price—especially since I knew I could reuse the to-go container.

Ticklebelly also makes cake pops, molten cakes, dessert shots, and sheet cakes. I’m curious to see if Target carries any of their other products because I’ve only ever noticed the White Out cupcake and Red Velvet. They also offer Chocolate, Key Lime, PB&J, Pumpkin (seasonal), and Snickerdoodle filled cupcakes. According to their website, you can find their products at Kroger, Ralphs, Raley’s, Fred Meyer, and King Soopers, in addition to Target.

I think the most important things to remember when buying cupcakes are to keep an open mind, don’t expect too much, and always have a back up plan if you really need to feed your sweet tooth. In the world of cupcakes, whether you are at a high-end pastry shop or the local grocer, some are great and some are not, so why not give them all a try?

This past weekend I visited my parents in Waldorf, MD, and came across Safeway’s Gourmet Cupcakes in their Bakery section. Instantly intrigued, I bought three: Mint Chocolate, S’mores, and Vanilla Pineapple (they were $2.99 per cupcake).

After leaving the Vanilla Pineapple with my Mom to try, I brought back the other two to share with Crusaders Jenn and Stacy! 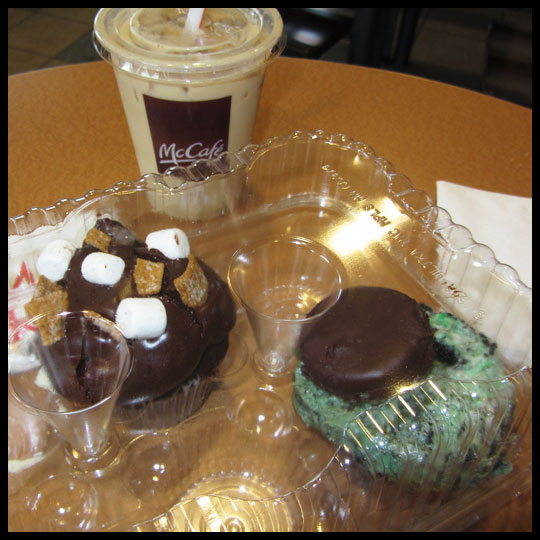 After making glass bowls at McFadden Art Glass (yes, on top of eating lots of cupcakes the three of us also love doing artsy things like blowing glass!) we stopped by McDonalds to try said “gourmet” cupcakes. McDonalds happen to by close by and we had decided coffee would be a good companion to our cupcake sampling.

The Mint Chocolate cupcake was covered in mint and cookies butter cream icing with a chocolate covered Oreo on top – which we all agreed were the best parts of this cupcake as the cake was dry, almost tasteless and just plain dull. I could have eaten the icing all day, with it’s not-too-sweet minty cookie deliciousness, and did finish all of it, including what was stuck to the container.

I’ve been waiting to try a S’mores cupcake FOREVER and was very excited by the ganache covered icing with gram cereal and marshmallows on top. It looked better than it tasted, period. The cereal was very chewy, the chocolate overpowered the marshmallows, and again the cake was dry and tasteless. The three of us agreed – the silver lining of this cupcake was again the icing. Stacy, who is not a huge chocolate icing fan, really liked it, and that’s very impressive for grocery store icing! It was smooth, chocolatey, and not too sweet. I really like when chocolate (or cocoa) is allowed to shine in its own glory and not sweetened to the point of being unrecognizable. This icing allowed for that and we all went scraping for a little more of it – leaving the left over cake naked of it’s icing. 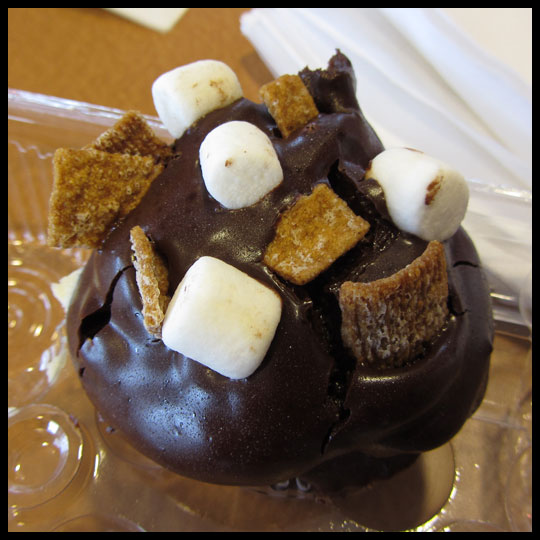 I’m not sure I would spend that much on Safeway cupcakes again – now, if they start selling just containers of the icing, count us in!

@cakebyjason’s Rosé cupcake was what we needed, after the last Rosé cupcake fail. It’s exactly what you’d hope to find in a Rosé cupcake - pink velvet cake with a Rosé champagne frosting. Definitely something we can #cheers to! 🥂💖🍾
Continuing our Valentine’s Day with cupcakes from @cakebyjason! 💝 Just as tasty as they are beautiful!
Anyone else having Valentine’s Day donuts this morning?! 😍🍩❤️
We didn’t want to end this little prepackaged series on a bad note, and since we’ve been eyeing up these jars of layer cake in the refrigerated section of the grocery store we hoped maybe they could redeem the others. Luckily, this treat ended the bad streak of lackluster packaged desserts! With layers that include cream cheese frosting, it leans more towards tasting like cheesecake than a cupcake or a slice of cake, but that’s fine with us! @dontforgetcakes has other flavors like cookie dough, caramel, and red velvet, and they can be stored in the freezer, so we’ll likely be posting more in the future.
We took a chance on this $3 prepackage “rosè” cupcake from Target. It’s so pretty and the package says “Inspired by flavors of Strawberry, Peach, and Citrus,” but sadly it tasted more like artificial bubble gum. Word to the wise: do not get this cupcake thinking it will be a great Valentine’s Day treat. It will not. Especially for that price, go to your local bakery instead. On a more positive note, the cake was moist and not all that bad, but it just couldn’t save the frosting and filling. #valentinesday #valentinesday2020 #rosé #roséallday #happyvalentinesday
These Cakebites had so much potential to be great, because really how can peanut butter and chocolate ever go wrong? The Italian rainbow Cakebites we tried last spring had so much almond flavor, that we were sure these would bring the flavor, but unfortunately the peanut butter is not present at all. The cake isn’t actually bad, it just is lacking in flavor, which is a complete opposite to the Italian rainbow cake. Sadly, these are another miss in the packaged baked goods arena... but that doesn’t mean we’ll stop trying. 😬