Memorial Day weekend is a holiday to remember the men and women who served and died for our country. Most people get that Monday off and enjoy having the extra down time. For the past few years I’ve spent my Memorial Day weekend with my friend Kevin and his wonderful family (our significant others also joined us). This year I knew there would be a cupcake crusade mixed in between the fishing, beaching, tanning, eating, and drinking. While in Ocean City at the end of April for the OC Half Marathon, I researched the Smith Island Cake Company and knew I HAD to get there over the long Memorial Day weekend. Luckily for me, I only had to trek to the Ocean City Outlets, as there is a store front located right over the Rt 50 bridge on the mainland. 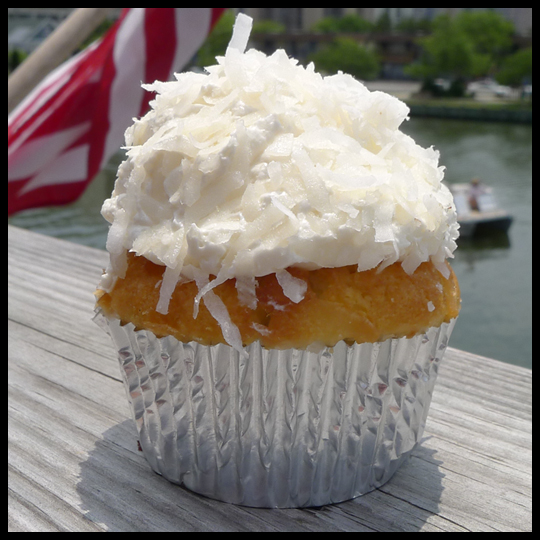 If the texture of coconut isn’t something you like, this cupcake isn’t for you. The cake is on the dryer side, and is chock full of shredded coconut. The icing was light and fluffy, but lacked in flavor and oddly tasted more like whipped cream than true buttercream icing. The cupcake looked so yummy that it was a bit of a let down overall.

The lovely lemon flavor of this cupcake makes it stand out among the rest. The moist cake and lemon curd filling (let’s face it, you all know I love curd!) create a sweet but tart treat. The icing was light and fluffy, but wasn’t lacking in flavor. Overall this was my favorite cupcake of the bunch.

Macerated strawberries are fantastic on top of just about anything (for example, short cake, pound cake, angle food cake, etc), and was great as a filling in this delicate cupcake. The moist, airy cake was simple, while the icing was the same light fluffy icing that was found on most of the cupcake options. Sometimes fruit flavors can be too sweet, because there is too much sugar added to the already sweet fruit, but this cupcake was a great balance of sweetness. I’d definitely eat this one again and think it would be a good base for my next baking experiment! (I’m thinking a basil/strawberry spin!)

An ice cream themed cupcake? It was too good to be true… and sadly it was. The cake was moist, but flavorless and I really missed the caramel flavor completely, which I found odd as it was supposed to be “injected” with caramel. The chocolate icing on the other hand was fantastic. Not too sweet, very smooth, and creamy, this icing and filling saved this cupcake from being totally boring, with a cherry on top.

This delectable cupcake was filled with creamy peanut butter and topped with the same creamy chocolate icing I described above. The cake was a little on the dry side, but with all the filling and icing I barely noticed. I would order this cupcake again and eat it while I drank a cup of coffee. 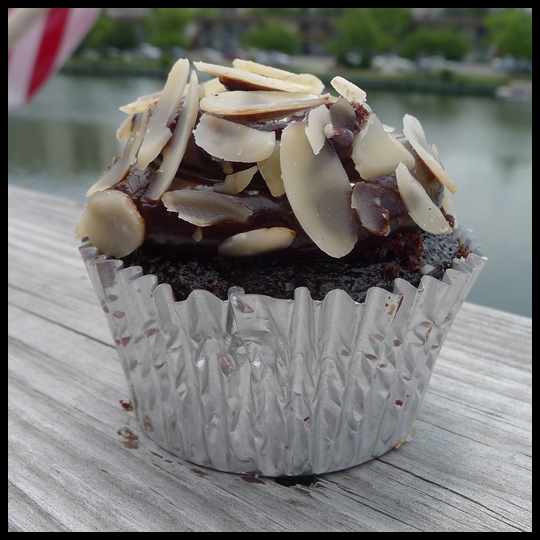 Another ice cream themed cupcake?! This one, like the other was a bit of a disappointment. While the cake was moist, and the chocolate icing was good, there was not enough marshmallow fluff or flavor to create that true “rocky road” experience and the almonds slices weren’t crunchy.

While I love Smith Island Cakes traditional layer cake and will gladly pay $4.50 a SLICE, I am not sure I would go back for another half dozen cupcakes. The cake was a little too inconsistent and something seemed to be lacking in almost every cupcake. I did love the chocolate icing, but I’d rather buy it in a tub to spread on my own cupcakes. Overall I am just grateful to Kevin and his parents for the wonderful weekend, and for sharing in my cupcake crusade!