Day two of our NYC trip started off with a beautiful sunny day! After a failed attempt to use public transportation (I am determined to use the bus next time), we hailed a cab in true New York fashion and headed down to 20th Street, where we were meeting up with a friend for brunch at Tipsy Parson. 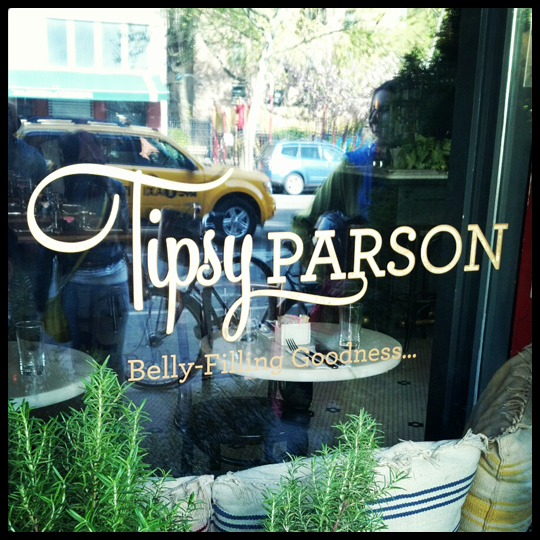 Knowing we would be eating plenty of sweet treats throughout the day, we stuck to a savory order for brunch: grits, eggs, veggies, and drinks of course! 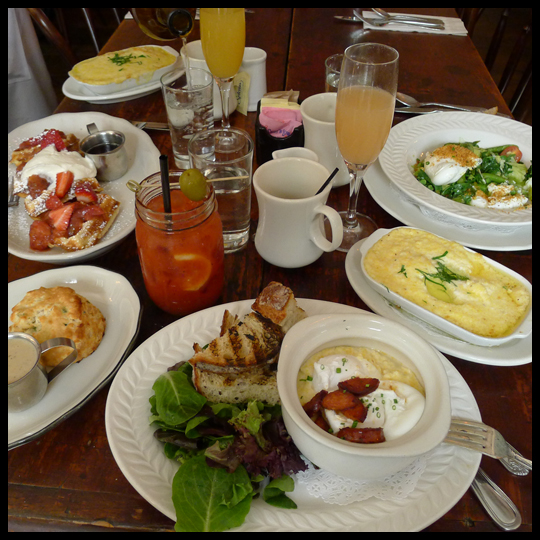 (Our delicious meals! *I wish that Stacy ate bacon, because that bacon gravy over biscuit was the highlight of my meal!)

After brunch our next stop was the Chelsea Market. I had never been there before and Stacy knew I would love it! This is where we encountered our first cupcakes of the day at Eleni’s New York. After such a filling brunch, neither of us could imagine eating anything else, so we decided to take these cupcakes home with us. Packed away, these cupcakes were walked all over New York as well as being trekked all the way back to Baltimore! (I’ll come back to those though, since we didn’t eat and review them until later.) We also happened upon a bit of shopping and both ended up with perfectly sized Anthropologie shopping bags – which ended up being the perfect size bag to carry cupcakes in!

After the Chelsea Market, we walked The High Line, a public park built on a historic freight train railway, elevated above the streets of the city! Filled with beautiful flowers, trees, plants and views, The High Line is officially my new favorite thing in New York. The weather could not have been more perfect for a walk through the park, among the rooftops of New York’s West Side. 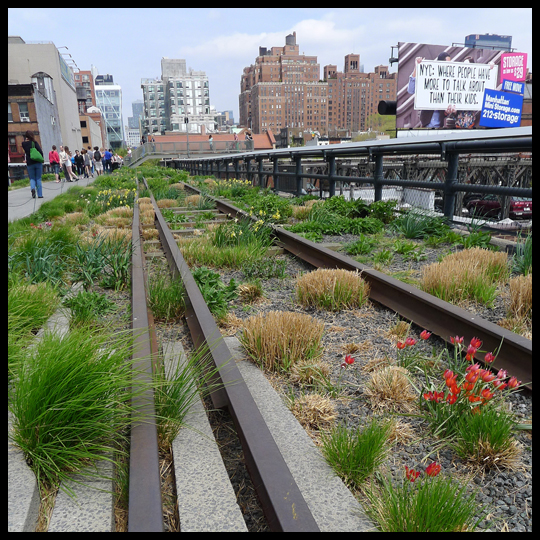 (Very cool park design so that the tracks could remain an element within the new organic landscape surrounding it – plus, a great view!)

Lucky for me, Stacy plans out our NYC trips and knew Billy’s Bakery was located just a block away from the High Line on 9th Ave between 21st and 2nd Streets. While we were a little disappointed in the selection, I still managed to break our “one cupcake per location” rule and got two cupcakes to try! Stacy ordered hers and we were set to eat our first cupcakes of the day! 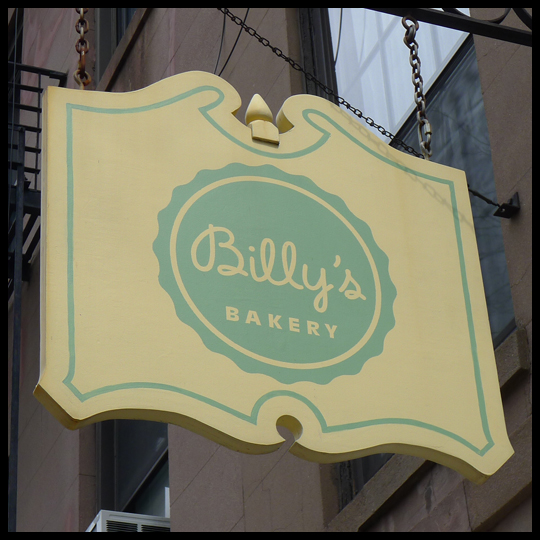 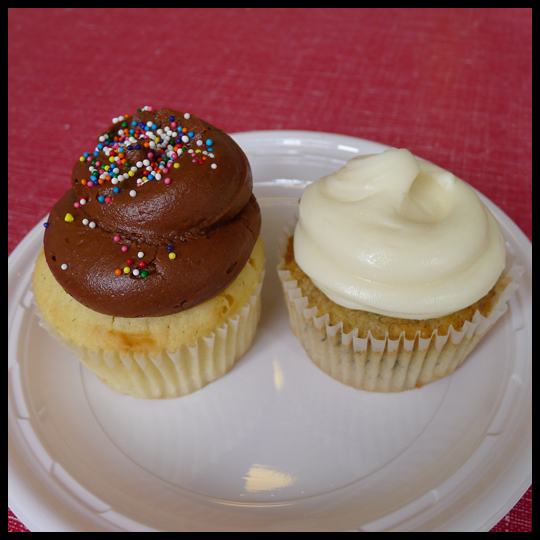 The Vanilla cake was a little on the dry side, but the chocolate frosting was a very milk chocolaty and smooth. The stand out for me was the Banana; not too dense, which can make a banana cupcake taste more like a muffin, this was the perfect balance of real banana flavor and smooth cream cheese frosting. I enjoyed every morsel of this cupcake and hope they have it again next time we are in town. 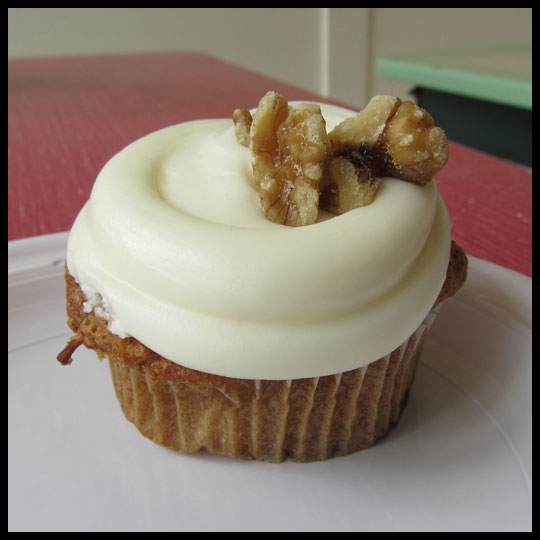 Stacy had this to say about it: “The Carrot Cake cupcake was probably the best carrot cake I’ve ever had! It was incredibly moist and full of shredded carrots, coconut, and I think even zucchini. The frosting was a sweet and smooth cream cheese frosting, which in my opinion works the best with carrot cake.” After loving the Carrot Cake cupcake so much, Stacy knew she had to bring one back for Jenn, who we may need to give the title of “Carrot Cake Crusader.” (Jenn, surprise! Stacy has a cupcake with your name on it!) After buying the cupcake and the adorable box for it to be taken to-go in, we trekked on with cupcakes in hand! 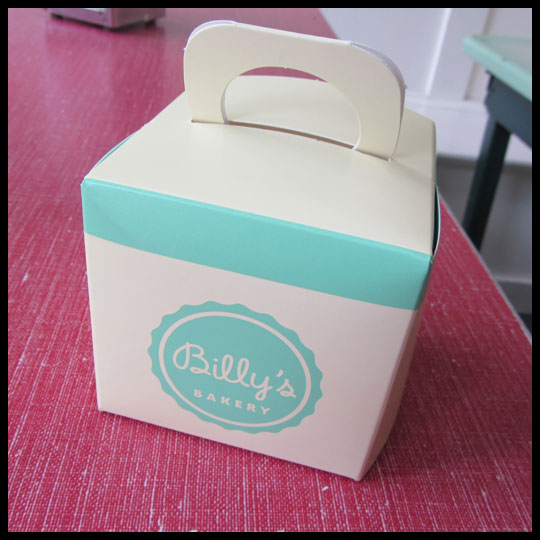 (Seriously, how adorable is this to-go box?!)

From there we hopped on the subway – since we had the MTA cards, we figured we would use them – and headed up to Central Park. While I have been to New York City many times, and been to Central Park too, I had never been to see the Bethesda Fountain, so that was our first stop. 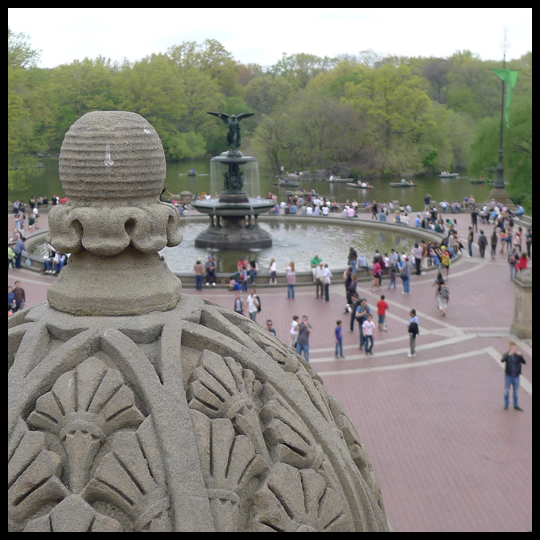 From there we walked south through the park, landed in Sarabeth’s for some much needed, very late lunch, and then headed back to our hotel to pick up our bags. Our trip was nearing the end… but not without one last cupcake stop: Baked by Melissa.

We both placed our orders, including a dozen of these quarter sized cupcakes for Jenn, carefully placed the boxes in our handy Anthropologie shopping bags and headed for Penn Station to catch the train home. Being the very patient people we are, once on the train we almost immediately opened our Baked by Melissa boxes to try one of April’s Mini of the Month: Peanut Butter Fluff. 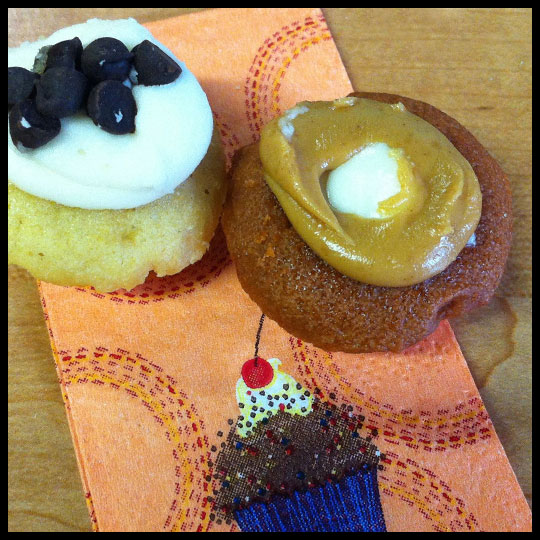 Sweet and tiny, this was the perfect way to end the day and say goodbye to our home away from home. But that wasn’t the end of our NYC cupcake eating because… 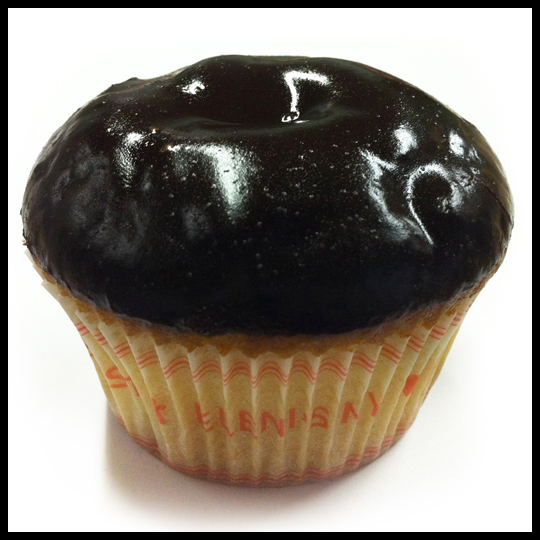 “The Boston Creme cupcake was WONDERFUL! Perfect size, not too large or too small. The cake was moist, the filling was creamy, and the thin layer of chocolate ganache was rich and smooth. I really wish I had bought more of these. Next time I’m getting one for Jenn and my dad who both love Boston Creme as much as I do!”

And never missing the tiny details, she noticed they have personalized cupcake wrappers as well! What a great detail and great way to market their website! 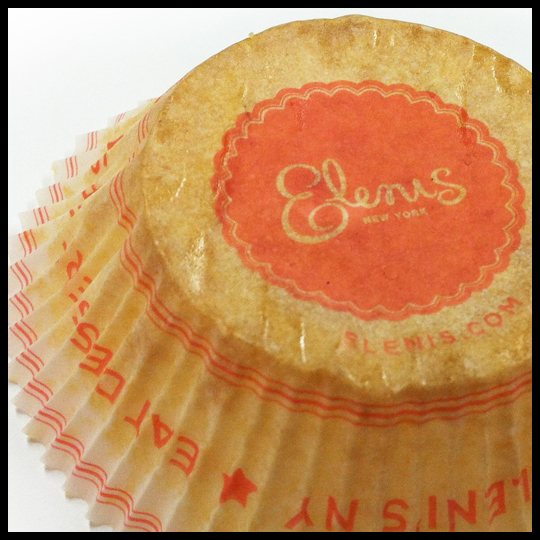 I brought home Eleni’s Raspberry Raspberry and a dozen Baked by Melissa minis. Here’s what I thought of my Eleni’s cupcake: 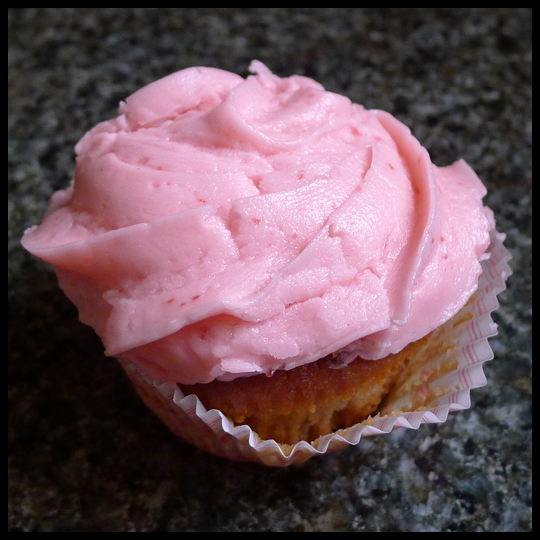 This cupcake may look like a mess – after being trekked around one city, on a train and car ride to another city, I was amazed any of the frosting was still on the cupcake – but it tasted like a raspberry dream! The cake had actual berries in it and the frosting was just the perfect amount of sweetness. I could eat this cupcake for breakfast, it was that refreshing and light, moist and sweet! I cannot wait to go back and try more from Eleni’s!

While our annual NYC Girls Trip was not the same without Jenn – and we kept saying to each other, “I wish Jenn were here” – it was a great trip! Stacy is the very best travel buddy, and to get to see so many new places, in one of my favorite cities, and eat so many cupcakes, made this trip one of the best yet! 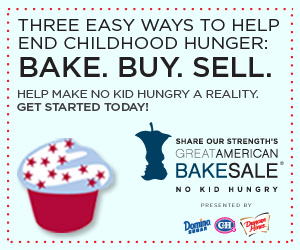